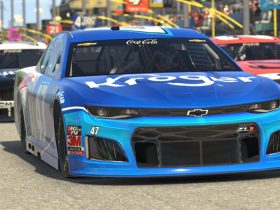 Sebastian Job is the first esports racer to win an award by the prestigious motorsport magazine.

Sebastian Job wins the Autosport Esports Driver of the Year Award as the racing magazine revealed on Monday morning. “This is like a little cherry on top to cap off a great year,” the Briton said in a video message. Job became iRacing world champion by winning the 2020 Porsche TAG Heuer Esports Supercup.

Introducing a new category for the Autosport Awards 2020, and one fitting for a year where esports boomed 🏆

Your first-ever Esports Driver of the Year is:

The Red Bull racer won the public voting in front of F1 Esports pro Jarno Opmeer and Coanda Simsport driver Joshua K Rogers. “2020 was a great year for me in sim racing,” the award winner told Autosport. “I took a huge step forward in terms of performances.” This step showed in his dominance in the iRacing competition. The 20-year-old won six out of 20 races and finished on the podium 13 times. “I think the key moment of the season was the first round,” Job stated on Autosport. “We worked very hard during the off-season. From that point on the confidence was really high.”

Autosport has been one of the biggest magazines in the world of motorsports since 1950. It is the first time the brand introduced an award category solely for esports racing. However, Job’s award is not the only esports-related one to be given out this year. On Saturday, the magazine announced the 24 Hours of Le Mans Virtual 2020 to win Autosport’s Pioneering and Innovation Award.

SEBASTIAN JOB: OUR HERO OF THE MONTH

Sebastian Job is looking to defend his title in the Porsche TAG Heuer Esports Supercup soon. The competition is heading into its third season on January 9. Ten rounds until late April are going to decide whether the champion can continue to dominate the iRacing world elite.

Do you agree with Autosport’s decision? Who would you pick as Esports Driver of the Year? Tweet us your opinion at @overtake_gg!