Prepare for a whole new RaceRoom experience with the June update! Here are all the most important details.

Sector3 Studios has released a major new patch for RaceRoom. The update brings some new features, but the most significant changes are overhauls to existing systems. In particular, the force feedback system has been totally revamped in an effort to give a more authentic experience. Along with this are changes to replays, the menu interfaces, graphical additions and a few smaller tweaks as well.

Until now, RaceRoom’s force feedback system was essentially comprised of predetermined responses which would be triggered by certain events, such as a car understeering. This meant that the feedback players were receiving through their wheels were not actually a true reflection of their driving. Rather, they were useful approximations to general scenarios.

Now, that has all changed. The new force feedback system is more adaptive and responsive than had previously been the case. One way in which this will likely be noticeable is in the differences between certain cars. In the past, vastly different cars would often feel oddly similar to one another, just tuned up or down according to their weight. Theoretically, each car should now bring with it a more unique experience.

Video time, and today I’m taking a look at the new @raceroom force-feedback system, intentionally bouncing off kerbs and getting lost in lengthy metaphors. In other words, business as usual.https://t.co/hPLbeequa0 pic.twitter.com/U8v8ntfltm

The settings menu for force feedback has also been altered and simplified. On top of the simplification, the game will now suggest certain settings for players depending on what wheel they are using if they are using one. No longer will blind trial and error be the only way to find the perfect force feedback setup.

Along with the headline force feedback changes come redesigns of the menu and replay interfaces. The menu style previously used for the car setup screen has now been expanded to include the options and in-session menus. This new UI has a sleeker dark theme, and it also includes a search function for specific settings so that players don’t have to waste time scrolling through the menus.

Replays have also received a facelift. The interface now features drop down lists with which players can shift the camera from one car to another, rather than having to skip through every single car between the two. Simplification is once again the name of the game, as the overall UI now appears more intuitive.

The Big June Update is out now!

More significantly, the instant replay feature has been added to race sessions, meaning that you can enter replay mode without having to leave the session. If that wasn’t enough, keyframes have also been added to the free camera. This means that players can set up keyframes, which the replay camera will then transition between as the replay progresses. With this, smooth, cinematic experiences can more easily be created.

An improvement to Graphics

Lesser changes have also been made to RaceRoom. Tyre smoke has received a significant upgrade, and sparks have also been added. These will fly out from behind a car when it crests bumps or runs over kerbing, giving a more immersive feel overall. A number of cars have received small balance changes, and sounds reflecting drivetrain oscillations and kerb riding have also been updated.

That is all the basic information, but keep an eye out on our YouTube channel for a more in-depth look at the new RaceRoom patch soon!

What would you like to see added to RaceRoom next? Tell us on Twitter at @OverTake_gg or in the comments down below! 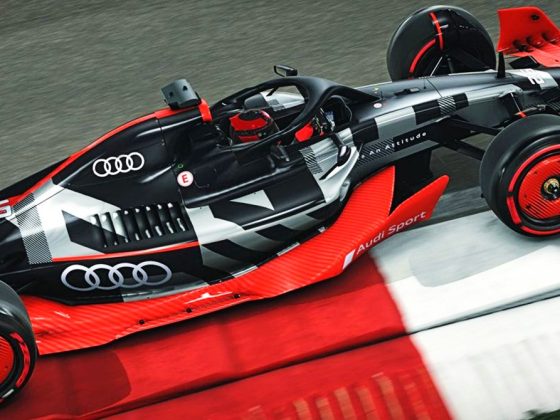 Can't wait until 2026 to race an Audi-liveried F1 car in an officially licenced game? Well, good news! In the latest season of the Podium Pass, the Audi launch livery is now available. ...