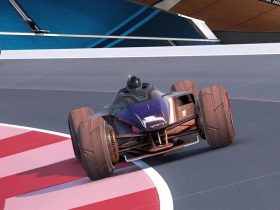 Young British drivers aged 14 or 15 can hop on RaceRoom now to potentially find their way into a full season’s worth of racing in the real world.

There have been plenty of esports competitions over the years that have helped racing gamers get a chance to compete in the real world, such as GT Academy and World’s Fastest Gamer. Another one has now come onto the scene, and it promises one boy and one girl a chance to drive for dedicated racing outfit competing in the F4 British Championship.

The ROKiT Racing Star F4 Esports Competition aims to provide a platform to young drivers from all sorts of underrepresented backgrounds, and to create equal opportunities and pathways for them to become racing drivers. The series has brought together pioneers in motorsport for the same goal: making motorsport more accessible to young talents.

Then the new @rokit Racing Star programme is for you! Take a look 📺👇

If you are a British citizen living in the UK and aged a minimum of 14 years old by the start of 2022, you can go to RaceRoom’s website and find the Racing Star competition page to sign up.

What does it consist of?

The championship is made up of five online rounds, all of which drivers have to qualify for in order to compete. Qualifying periods are due to take place in the two weeks leading up to the first round. Drivers can now go onto RaceRoom and do laps to try and earn their spot on the starting grid for the first race.

After the fifth round, the top 16 boys and top 16 girls in the points standings will then compete in an on-site grand final evaluation. All the competitors will gather at the University of Bolton’s National Centre for Motorsport Engineering auditorium, and will participate in a knockout style final using Racing Unleashed professional simulators.

The 2022 @rokit Racing Star Competition is open on #RaceRoom!

The boy and girl winners will receive access to a six-month professional driver training program in the second half of 2022, so they can earn the relevant competition licence to compete in the 2023 F4 British Championship. This is the same championship where McLaren F1 driver Lando Norris, IndyCar race winner Colton Herta, F2 champion Oscar Piastri and also Billy Monger all earned their stripes.

Who will be able to compete?

This competition is exclusively for people aged 14-15 who are citizens of the UK so it’s fairly limited. For older drivers who hail from outside of the UK, there are plans for a major expansion in the future. The organisers intend to offer competitions for all ages and all countries.

The Racing Star website holds a link to a page entitled: ‘F4 Esports World Series’, which is reportedly ‘coming soon’. The name indicates that it will be open to people of all nationalities, perhaps with a similar prize on offer for the champion.

Hopefully, we won’t have to wait long before there are more competitions, both for people in other countries and for more age groups. We may be seeing two German sim racers who will race in ADAC Formula 4, or some older sim racers going into GT racing perhaps?

The races can be found on Racing Star’s YouTube channel. Here are the dates of the races for the upcoming season:

Be sure to visit Racing Star’s website if you are interested in signing up to compete. Who knows? Maybe you will be the one competing at the likes of Brands Hatch, Donington and Silverstone in 2023.

Will you be attempting to qualify for the ROKiT Racing Star F4 Esports Competition? Tell us on Twitter at @OverTake_gg or in the comments down below!