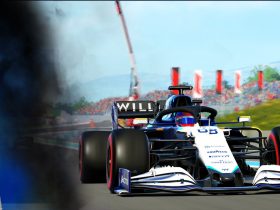 Carl Jr has won his first Trackmania World Cup title in six years with a win over Pac and Kappa.

Carl-Antoni ‘CarlJr.’ Cloutier has once again risen above the competition in Trackmania. After winning two of the last three Trackmania Grand League seasons, the rapid Canadian has claimed what is perhaps the ultimate prize in Trackmania esports – the Trackmania Grand League World Cup. The last two world cup winners, Martin ‘Kappa’ Krompolc and Thomas ‘Pac’ Cole were both in the final alongside Carl Jr, but neither could prevent his dominant run from continuing.

How did we get here?

The first semi-final saw Carl Jr pitted against Valérian ‘Papou’ Ramamonjy, Sébastien ‘Affi’ Affolter, and Aurélien ‘Aurel’ Bouard.. Immediately, the reigning Grand League champion leapt out of the blocks, taking a very healthy 14-point lead after the first four rounds alone. It was apparent that Carl Jr’s victory wasn’t up for debate. Instead, the focus shifted to which of the other three would join him in the final. Not long after, the Swiss competitor Affi developed a significant margin of his own to Papou and Aurel. Towards the end of the semi-final Affi had trouble solidifying his grip on second, but in the end it was he who joined Carl Jr in the final.

History has been made.

🇨🇭 Affi (@Affi1606) becomes the first-ever Swiss player to make the grand final of the world championship of Trackmania.

Can he make it to the podium and maybe even win it?#TMGLWC21

Next up was the second semi-final, in which Pac and Kappa were the favourites to progress. Standing in their way were Dennis ‘Scrapie’ Heinen and Dennis ‘Massa’ Lotze. Pac managed to qualify first from this group with relative ease, putting the pressure on  McLaren Shadow driver Kappa to hold off a late charge from Massa. Ultimately, it came down to one final round in a winner-takes-all scenario. The battle was agonisingly close, but Kappa narrowly clinched the last spot in the final by just over a tenth of a second.

Then came the final itself. A straight shootout between the top four drivers to determine the Trackmania Grand League World Cup winner. The British driver Pac kept Carl Jr more than honest, as he sometimes led the way on points. However, a couple of bad runs right at the death from Pac allowed Carl Jr to relax and claim overall victory. Pac and Kappa, tipped as the two likeliest challengers to Carl Jr since the very start, ended up second and third respectively.

This reincarnation of the Trackmania World Cup was the first event of its kind to take place since 2018, but the engagement and excitement levels bode well for the future of Trackmania as an esport. For winning, Carl Jr will receive €8000 from the €15000 total prize pool, as well as his first World Cup title since 2015.

Who will be the driver to take away Carl Jr’s crown? Tell us on Twitter at @OverTake_gg or in the comments down below!