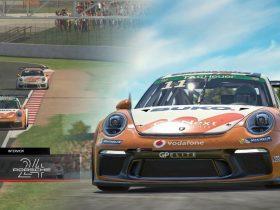 Team Redline on the rise

Grand League champion Carl Jr exceeded expectations in the group stage, while Pac and Kappa are hot on his heels.

There is nothing surprising about the fact that reigning  Trackmania Grand League champion Carl-Antoni ‘CarlJr.’ Cloutier made it through to the semi-finals. What may make people sit up and take notice, however, is just how dominant the Canadian was in the process. Carl managed 18 points out of a possible 18 in the group stages, beating every single opponent that was put in his way without too much difficulty. If anyone is going to beat him in the finals, it will take a mammoth effort from the driver involved.

Next & final step of the #TMGLWC21 is coming on Sunday July 4th with the playoffs!

Who will reach the grand final? 🧐 pic.twitter.com/Fbv0OFFgjy

Most likely to be able to do something about the indomitable Canadian is British driver Thomas ‘Pac’ Cole. Pac ended the group stage weekend second overall, only dropping two points for a total of 16. Martin ‘Kappa’ Krompolc also comes out of proceedings looking sharp, but the Czech was edged out by Pac both in the standings and in the direct matchup between the two.

Valérian ‘Papou’ Ramamonjy, Aurélien ‘Aurel’ Bouard, and Dennis ‘Scrapie’ Heinen weren’t too far away either, with the trio managing 13, 13, and 12 points respectively. Outside contenders they may be, but Papou in particular displayed some flashes of brilliance during the group stage. After these top six drivers, there was something of a gulf in terms of the gap to the final two qualifiers. Fan favourite Dennis ‘Massa’ Lotze managed to qualify with nine points, while Sébastien ‘Affi’ Affolter took the final qualifying spot ahead of Polish driver Marcin ‘evoN’ Szura, despite the fact that both players ended on eight points.

While it is true that the majority of the drivers who qualified were the favourites to do so, there were a couple of exceptions to this rule. Young hotshot Gwendal ‘Gwen’ Duparc is widely considered to be one of the very best Trackmania players in the world, but the Frenchman ended up down in fourteenth place. This is mainly due to the fact that Gwen did not practice much for the event for personal reasons, which Gwen tweeted about before the World Cup.

For those who wanted to know if i’m not training that much WC it’s because I know that if I qualify into playoffs I won’t be able to play it for personals issues/reasons, and if I can it won’t be in good conditions.

The other big surprise was Patrick ‘Mudda’ Radisich, who also failed to even break into the top ten. There were a couple of key moments in certain lobbies at which the Australian faltered. An overall finish of twelfth place with a score of six points is disappointing for someone who was expected to be a solid contender in the semi-finals stage.

Playoffs of the Trackmania World Cup will take place on Sunday, 4 July on the Trackmania twitch channel. The first semi-final will see Carl Jr, Aurel, Papou and Affi fight it out, while the other will pit Pac, Kappa, Scrapie and Massa against one another.

Do you think that anyone can challenge Carl Jr? Tell us on Twitter at @OverTake_gg or in the comments down below!