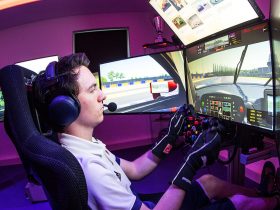 Details on Le Mans Esports Series Super Final promise epic racing weekend.One of the most highly anticipated and prestigious esports racing events of 2020 is just around the corner: with a total of $150,000 on the line, the Super Final of the Le Mans Esports Series in Forza Motorsport 7 is going to be among the most exciting tournaments this year.

The organizers, Motorsport Games, the FIA World Endurance Championship and the ACO (Automobile Club de l’Ouest, the organizer of the real 24H of Le Mans) have now revealed more details about the tournament and its Super Final. The event, which takes place September 15-18, stages races in four different categories.

Each of the four race days features cars from another era. Vehicles prior to the 1970s are going to inaugurate the event on Tuesday. 70s and 80s cars follow on the day after, 90s and 00s vehicles on Thursday. The final day hosts machines from the past ten years.

😆 It all comes down to this!

The #LMES Super Final begins on September 15th and will be an unforgettable week of racing!

Instead of staging a 24-hour race, the organizers came up with an interesting tournament format, spanning over four nights. Each day holds three rounds: two one-hour sprint races and a two-hour endurance race.

Every night, the two teams with the least number of points are eliminated from the tournament. The three best teams will then test their mettle in the Super Final on Friday, September 18.

The starting field is divided into two divisions, Pro and Pro-Am, with nine squads each. While the Pro Team Super Final boasts a prize pool of $100,000, the Pro-Am racers compete for $50,000. Among the rosters participating are renowned teams such as Red Bull Racing Esports Team, Williams Esports and the reigning champions of Veloce Esports.

Ben Rossiter-Turner, Head of Esports for Motorsport Games, is certain that the event will live up to the high expectations. In the official statement, he promises “four nights of fantastic racing that will include all the hallmarks of Le Mans such as history, endurance, skill and of course teamwork.”

If you want to watch the event live, tune in to the Le Mans Esport Series streams on Twitch, Facebook or YouTube.