iRX World Championship 2020: How it works

It might be one of the racing disciplines best suited to esports: rallycross. Short, action packed and exciting from start to finish. We explain how it works.
Photo credit: Beau Albert

If you've never had contact with rallycross before: give it a try! It is probably the perfect entrance into watching esports racing. Its events have a comfortable length of around one hour, it is full of contact and overtaking maneuvers as well as exciting drifts and jumps. At the highest league, the iRacing Rallycross (iRX) World Championship Series, no less than five out of 31 contenders still compete for the title in the grand final. A key reason for this is that the championship changed its points system in 2020. We explain the discipline and iRX World Championship's system to you.


Dirt, mayhem and the joker in between

31 drivers from 14 different teams are currently competing in the iRX World Championship. Among the teams are big names such as Yokohama, Subaru and Williams Esports. How does a rallycross race work, though? Drivers race on a short and sometimes narrow circuit which features different sections. Some with asphalt, some with gravel or dirt. This requires the drivers to adapt very quickly and also makes for cool drifting maneuvers. Many rallycross tracks also feature big jumps, mostly located at the finish or in the middle of the track. Action and hard contact are standard in rallycross. 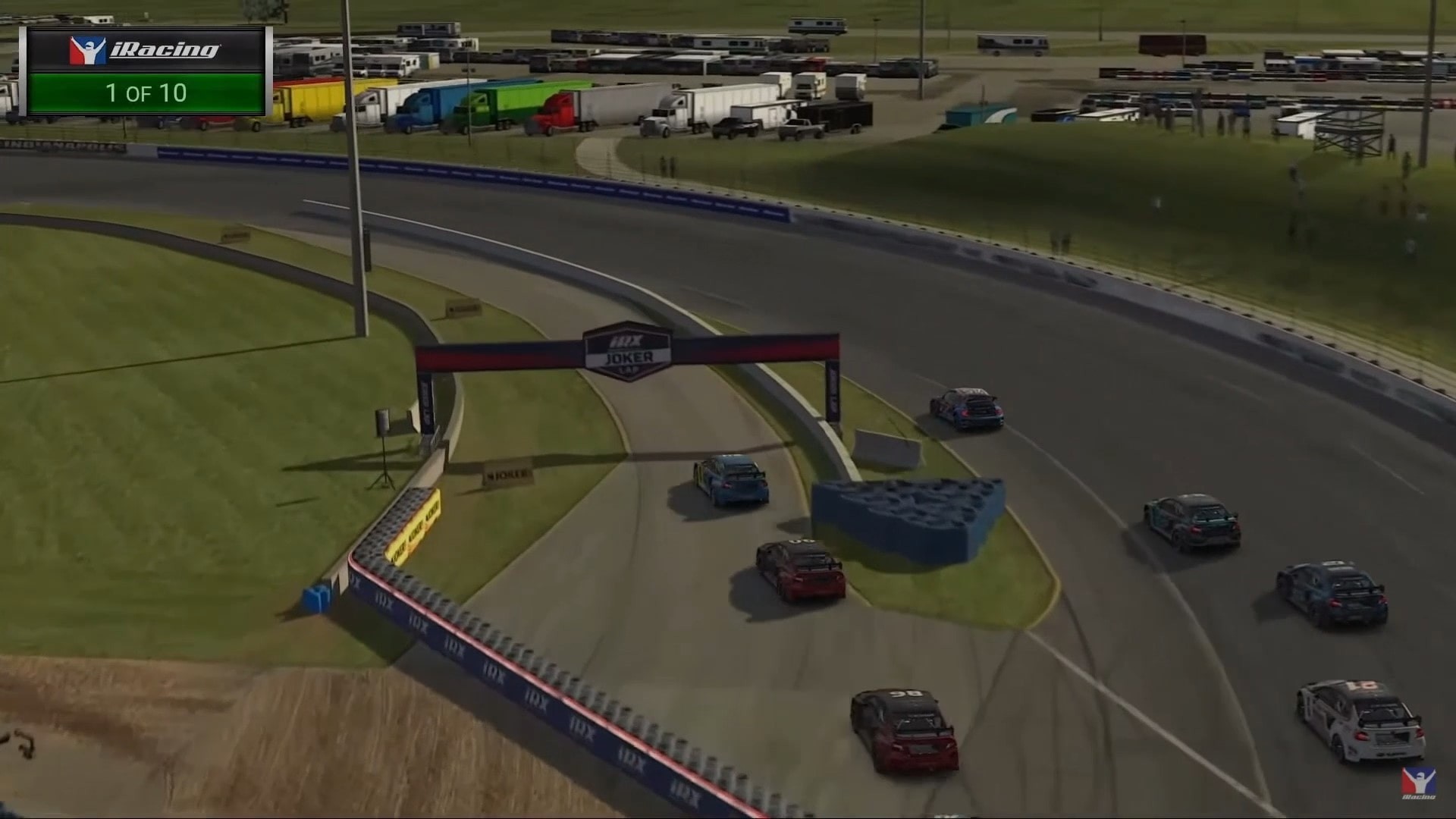 Joker laps can be crucial for the outcome of a race. Drivers have to use them wisely. Photo credit: iRacing

Rallycross races usually last five to ten laps, so the excitement never goes down. Each driver has the opportunity to make use of only one joker lap, which allows them to take a fixed shortcut. This adds another tactical aspect to the races. Pit stops are not a thing in rallycross.

Since 2020, the points system of iRacing's highest rallycross contest has changed. All drivers go through a qualification each round. The qualifying lasts six minutes and rewards the six fastest racers with points. Six points go to the fastest lap. The qualification times also determine the starting grids for the heat races.

No gifts are made during rallycross races. Contact is allowed and used. Photo credit: Beau Albert

In four different heat races, six to seven racers drive at once for more points and a spot in the final main event: the feature race. Each heat race lasts five laps. Along with a maximum of eight points for the winner, P1 and P2 of each heat race advance to the feature race immediately.

The remaining drivers then have the chance to advance in two further “Last Chance Qualifiers”. Only the winner of each gets to participate in the feature race. No points are awarded here.

The feature race can be described as each round's final, with ten racers participating. The feature race lasts ten laps instead of five. Victorious drivers get another 15 points. In total, 29 points are the maximum to take from each round. Have a look at the table below to see the system in detail. 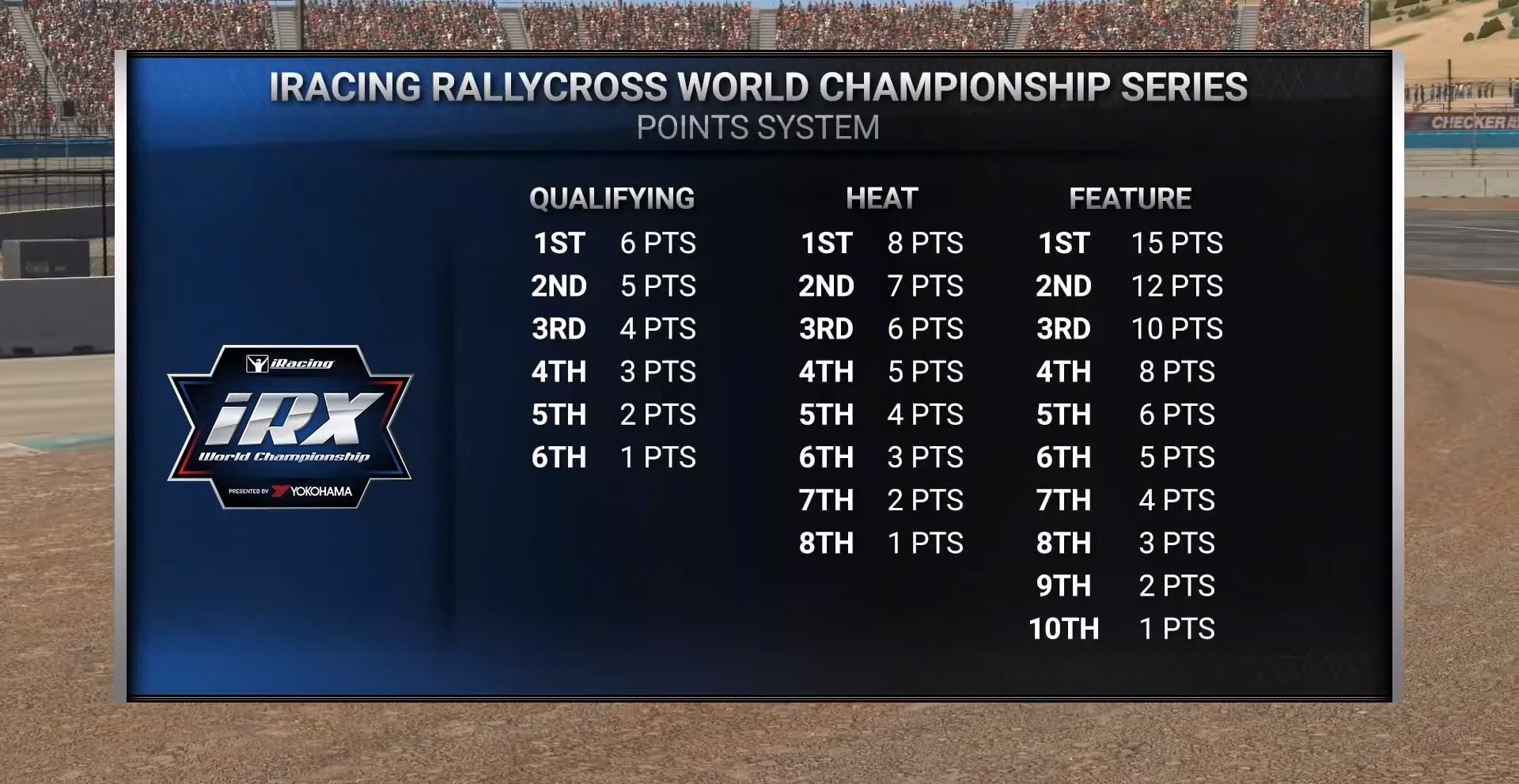 This series system makes sure every race counts, but nothing's over if you don't end up first. Photo credit: iRacing

A (nitro) circus worth your short time

The last round will start on December 5 and can be watched on iRacing's Youtube channel at 17 o'clock CET. Yohann Harth currently leads with one point in front of his Yokohama team mate, Jon Robertson. They are trailed by Tommi Hallman and Jonne Ollikainen from Finland, both driving for SET Esports. Former Red Bull X-Games wonderchild Mitchell deJong is fifth, still with an outside chance of making it to the top.

This is not the only interesting reason to give rallycross a try. Before each official event you get to see the "Allstar Invitational". Motorsport celebrities like Travis Pastrana (mainly known from Johnny Knoxville's show Nitro Circus) compete in the same mode as the official series. With no leaderboard, each round stands for itself, so the action is frantic.

Would you give rallycross a try? What is most important to you, when watching a racing event? Tell us on Twitter at @overtake_gg!
Did you like this article? Please click thumb up or thumb down.


Submit
Tell us more
Tags: rallycross
By clicking on one of those buttons you are leaving OverTake.gg