All you need to know about the new PESC season

The 2021 Porsche TAG Heuer Esports Supercup is starting soon. Here is all the info you need to start following the series.
Photo credit: Porsche

The third season of the Porsche TAG Heuer Esports Supercup is fast approaching and will get underway on Saturday, January 9. The iRacing based series will be looking to build upon the success of the 2019 and 2020 seasons, with a star-studded grid of esports racing professionals to boast of. A total of 40 competitors will take part in 20 races at ten different venues with a $200,000 prize pool on the line. Those are the basics, but lets have a look at its strcuture in detail and the most thrilling storylines to follow.

There are ten total events which make up the Porsche Esports Supercup series in 2021, and each of these events features a qualifying session, sprint race, and feature race. As the names suggest, the sprint race will be shorter than the feature, and as such more points will be on the line for the latter. Some points are also available in qualifying for the top five drivers on the grid.

As mentioned above, the first race will be taking place on January 9. This will be at Interlagos in Brazil, a legendary circuit. The caliber of circuits is maintained throughout the season, with visits to the Circuit de Barcelona-Catalunya in Spain and Imola in Italy both scheduled before the end of January. The final event of the season will also be in Italy, this time at Monza, and will take place on April 24.

The Porsche Tag Heuer Esports Supercup returns for the 2021 season! 40 of the best sim racers competing for $200,000. 🏆💰@PorscheRaces | @TAGHeuer pic.twitter.com/YKoP4YsTsP

Return of the champions!

It is not only the race tracks which are of a high caliber, the drivers are too! Both the 2019 champion Joshua K Rogers and his 2020 successor Sebastian Job are returning to battle it out for the 2021 crown. Both of these two will almost certainly be in the championship hunt this season. Other likely front runners include German iRacing ace Team Redline Max Benecke, and the Spaniard Alejandro Sánchez who managed an impressive third in the standings in 2020.

#PESC – Ready for racing? This weekend, the #Porsche @TAGHeuer #Esports #Supercup kicks off the new season @InterlagosTrack. Get ready for exciting @iRacing action with the #911GT3Cup. Reigning champion @G2Sebi will fight against @JKRogers_92, @maxbenecke11 and many new rivals pic.twitter.com/63QGmGc0sQ

While these are the most likely championship contenders, there are plenty of other exciting drivers who have championship potential. Charlie Collins, the victor of the qualifying series for 2021 will be looking to make a splash as a Virtual Racing School driver, alongside established teammates such as Mitchell deJong and the Australian Rogers. 2020 iRacing Rallycross World Championship champion Yohann Harth will be hoping to improve significantly on his seventeenth place finish in the previous year’s standings, while Red Bull Racing Esports Team' Graham Carroll will want to take the fight directly to his reigning champion teammate Job.

Competition in the Porsche 911 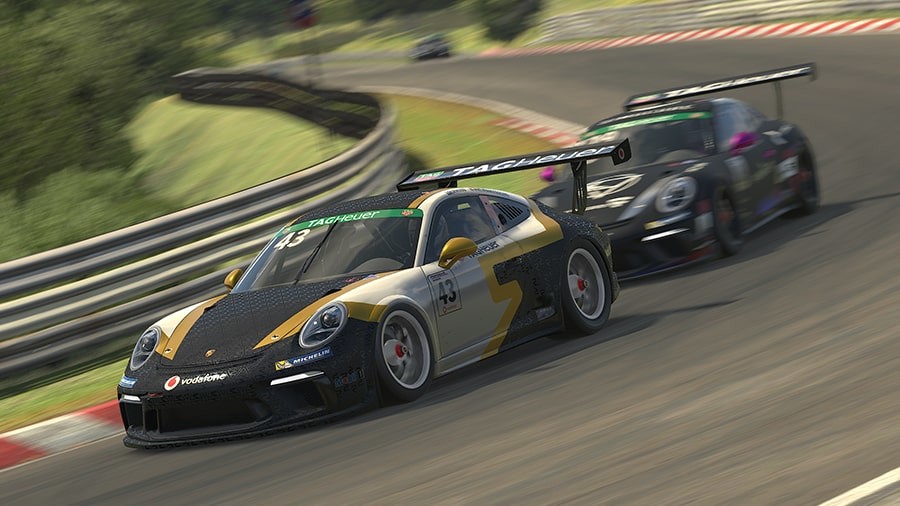 The Porsche 911 look is an unmistakable one, no less so on the track. Photo credit: iRacing

The Porsche TAG Heuer Esports Supercup is a spec series, and as such every competitor will be at the wheel of identical Porsche 911 GT3 cars. The most up to date version of the 911 GT3 features a power output of just over 500 horsepower, capable of taking the car from nought to 60 in narrowly over three seconds.

In terms of top speed, a healthy 312 kph (~193 mph) can be achieved. Despite the custom liveries, the cars retain the iconic look of the Porsche 911 cars, and are a sight to behold when they are out on track.

Every race will be broadcast as a livestream on both Porsche’s YouTube and Twitch channels on Saturday evenings. The first event at the Autodromo Carlos Pace also known as Interlagos in Brazil will take place at 6.45 PM CET on Saturday, January 9.

Who do you think is in pole position to win the 2021 Porsche TAG Heuer Esports Supercup? Tell us on Twitter at @overtake_gg!
Did you like this article? Please click thumb up or thumb down.


Submit
Tell us more
Tags: porsche, esports
By clicking on one of those buttons you are leaving OverTake.gg