Portuguese developer Bigmoon Entertainment has shared some first preview pictures of their upcoming game Dakar 21. There was no large announcement, but the developer simply started posting development pictures on their Facebook page throughout the past few weeks. A fixed release date has not yet been given, but it is said to be published later this year. Bigmoon stated that the game will be available for PlayStation 4, PlayStation 5, Xbox One, Xbox Series X and PC.

The title will be a successor to Dakar 18 which portrayed the 2018 season of the Dakar Rally endurance race, which took place in South America that year. Dakar 21 includes the 2020 and the 2021 seasons, both of which are set in Saudi Arabia. 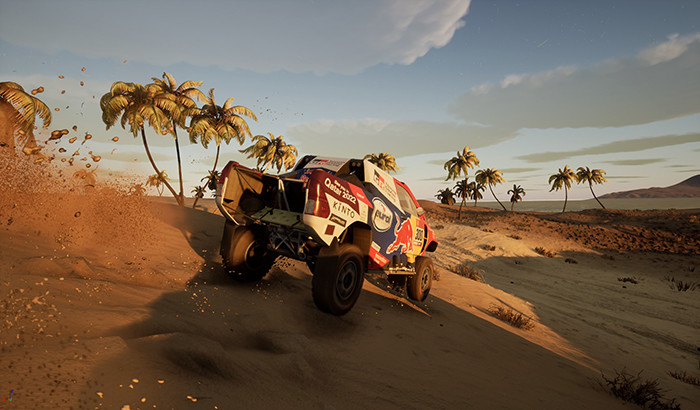 A chance for redemption?

Dakar 18 is the only racing game so far that Bigmoon Entertainment has fully developed. They have also been involved in creating 3D art for WRC 3, WRC 5 and MotoGP 13.

Their first game about the Dakar Rally failed to impress critics and players, receiving mostly negative reception. The title has been criticized for many aspects, mostly for bad driving physics, technical flaws and mediocre controls. Since there are only a few visuals currently available and no in-game footage, it is not yet apparent if the developer has managed to fix these issues.

What is the Dakar Rally?

The Dakar Rally is an annual rally raid that has been hosted by the Amaury Sport Organisation since 1978. The location differs each year, but it always takes place on extremely difficult terrains. In the first iteration, for example, the drivers had to cross the Sahara Desert.

Unlike most rally events, the participants compete with true off-road vehicles and not with modified versions. Vehicles range from motorbikes to off-road cars to trucks, UTVs and quads.

Due to these extreme settings, the Dakar Rally counts as one of the most dangerous racing series. Since its first iteration, 76 people have been killed in the event. Some competitors disappear in the vast terrain, while others die in crashes. Other casualties include spectators and innocent bystanders that live in the area, such as a 10-year-old girl in the 1988 race. The series has been heavily criticized several times for putting innocent residents of these areas in danger and for its environmental impact.


Submit
Tell us more
Tags: gaming, release, rallycross
By clicking on one of those buttons you are leaving OverTake.gg