From legendary items to piles of 'Pit Coin'. With this guide you will complete the new F1 2020 Podium Pass in no time.
Photo Credit: Koch Media/Codemasters

The Podium Pass of F1 2020 is one of the significant new additions to this year's game. The franchise introduced its version of the Season Pass with it, and therefore something to grind for when playing the game. While longevity was always an issue with the F1 games, the Podium Pass has just gone into its fourth season.

Series 4 of #F12020game's Podium Pass is now available in-game, with new challenges and customisation items to unlock in both the free and paid tiers 🏎

Fans are eating up the content, but there is often confusion about which challenges to do when. One thing is for sure: If you want to achieve the primary prizes in Podium Pass series 4, you will need to plan to climb every step of the Podium Pass ladder.

Broadly speaking: There are three main quest types you can participate in.

Here you can see the types of challenges available. Photo Credit: F1 2020

The first is a daily updated challenge called 'Standard'. Challenges that are included here often reward you with a minimal amount of XP. They are usually tied to something casual like winning two races with a specific team or getting a clean lap at a particular track. If you want to complete them, they are most likely manageable in an hour. Yet the reward isn't really worth it. The only upside to them is that they are updated so regularly. Plus, if you don't like a particular task, there is the possibility to replace one every day.

The second category is a weekly updated questline called 'VIP'. If you buy VIP entry to a Podium Pass for 7,500 Pit Coins, you are entitled to some extra challenges that allow you to gain a moderate amount of XP. The value is generally around 600 or 750 XP per challenge. Sometimes, challenges here can be very straightforward. They include tasks like: "Cleanly overtake one opponent while DRS is activated."

If you grind the game, a VIP Pass might be for you. It also offers the player extra rewards for each level of the Podium Pass. If you do enough challenges to complete the pass, then a VIP version pays for itself. Also, the simplicity of some challenges makes them extremely easy to farm.

The final type of challenges is the so-called 'Series' tasks. These types are the main source for your XP income for any player. You should try to complete as much as possible to climb the Podium ladder the fastest.

The Series challenges include four types of tricky categories.

First off are the single-player, non-career tasks called 'Solo'. All categories from Series are only updated at the start of every Podium Pass. So the challenges remain the same over the full 60 days. 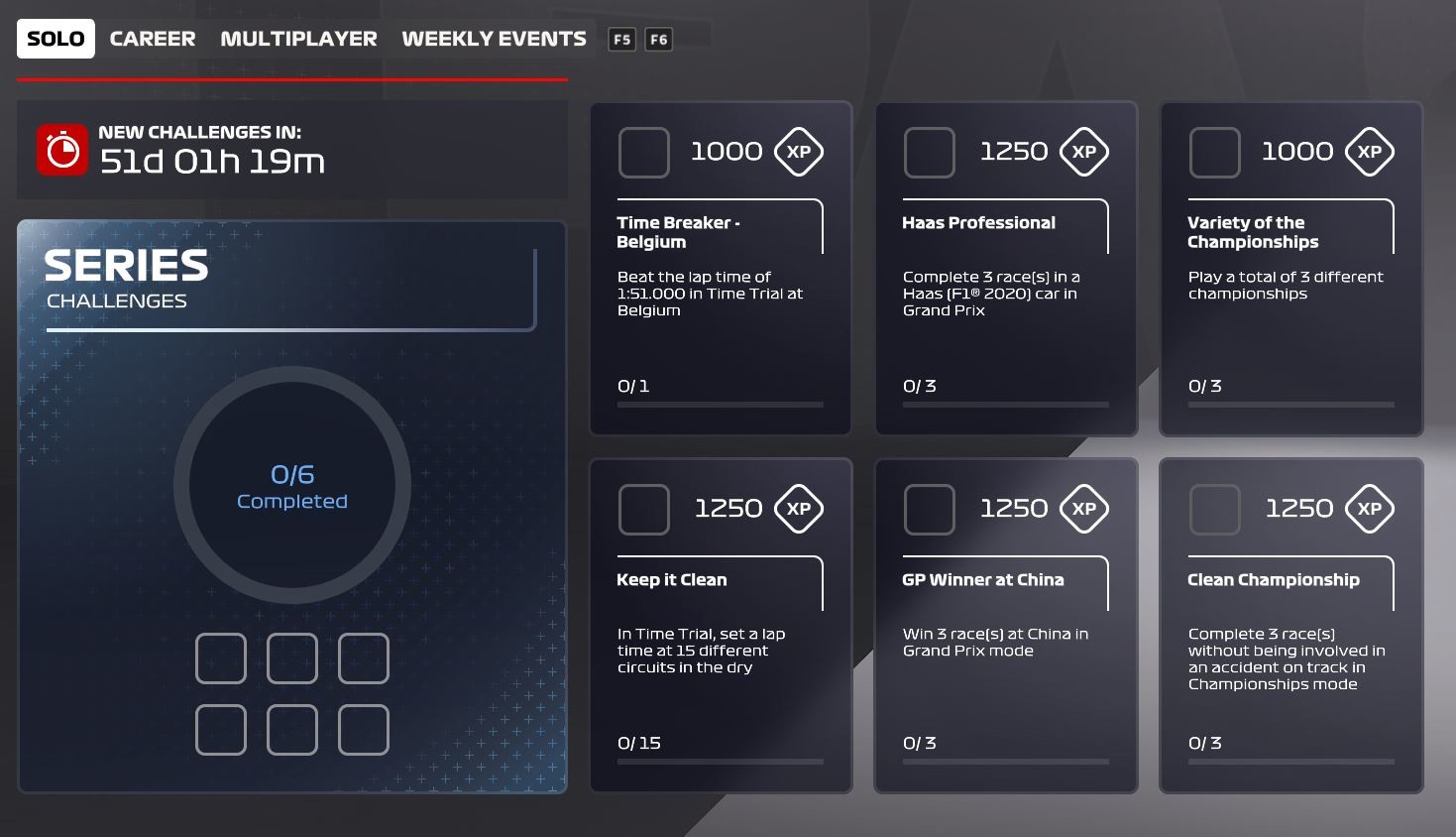 Solo challenges are about keeping it clean. Photo Credit: F1 2020

While the XP payout is excellent, with 1250 on average, some challenges seem harder than others. A 1:51 at Spa is doable, even for average players. Completing three championship races without an accident on track seems a lot more challenging. Of course, you can turn down the difficulty and try to drive a safe race, but even then, the time consumption is greater than with other challenges.

Whether it's My Team or a casual driver's career, these challenges revolve around long-term gameplay. 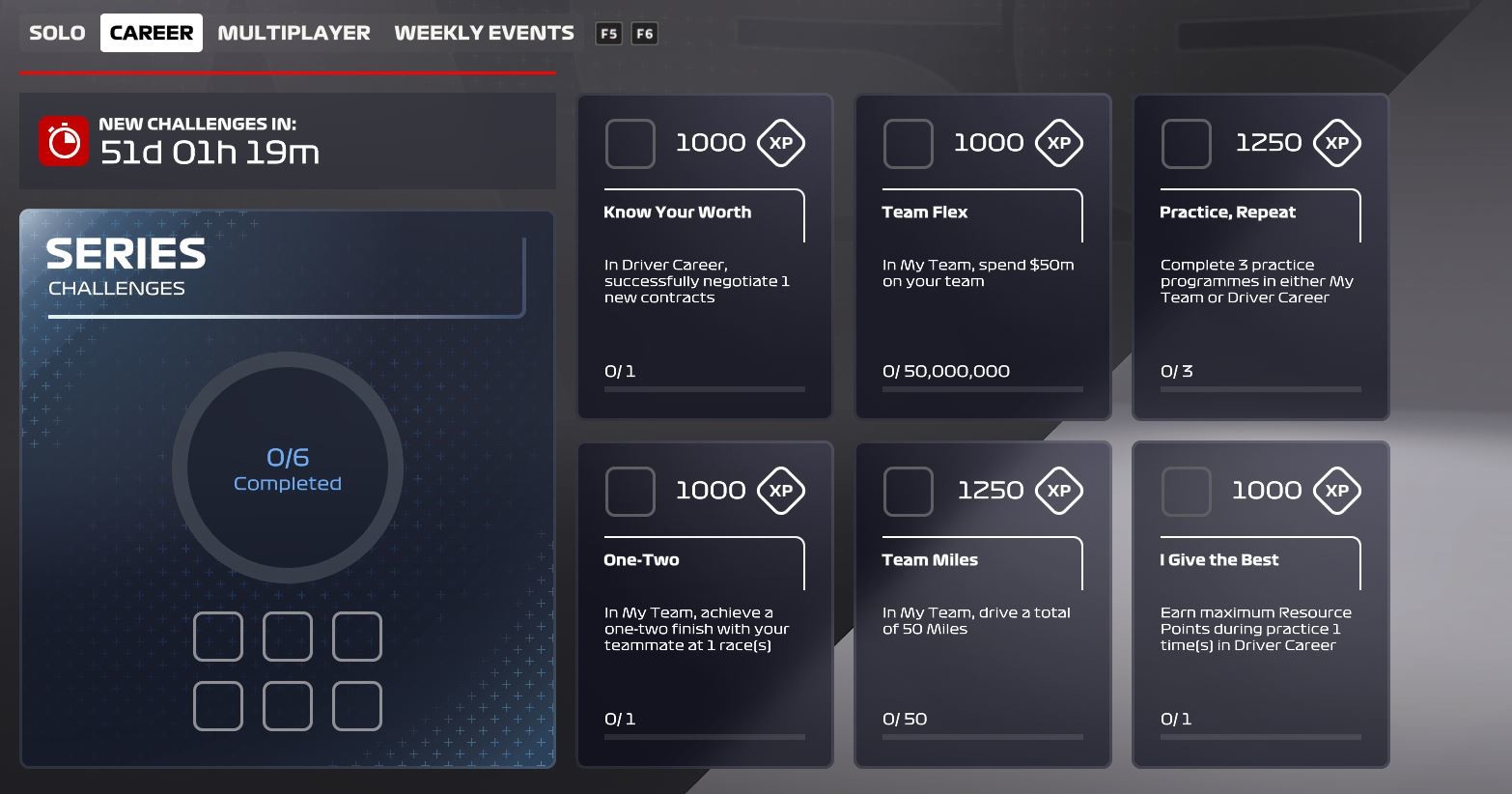 Possibly the most grindy types of challenges. Photo Credit: F1 2020

With the career challenges, players have a real task ahead of them. Most of the tasks offer mediocre rewards, yet require extensive time investment – for example, the 'One-two'. To achieve a double finish in My Team it requires you to have played a minimum of 15-20 hours just to get your teammate up to an acceptable pace.

If you already have a team that is head and shoulders above the rest, some of these challenges might not take too long. But if you start from scratch in both player career and My Team, then these tasks will take far too long to justify the reward and should only be done after everything else.

Playing with your friends or against your foes does not matter in these challenges. Online and Splitscreen races both qualify under this category.

From all of the challenges present in this Podium Pass, two multiplayer tasks seem especially challenging. "Collison Free at Australia" and "Collision Free at Spain". Driving one online race without a crash is hard enough, but three is a steep mountain to climb. Most online lobbies can turn into mayhem very soon after the start. So keeping it clean might well be the biggest challenge in all of the Podium Pass.

Contrary to that, the 'Split Mode Squad' is very straightforward and can even be done solo if you have two controllers. All in all, this category demands some tough grinds from the player, but other challenges are very doable. If you already hold a safety rating of B or if you are ranked Silver or above, the tasks "Rating B Champion" and "Silver Rated Champion" are achievable pretty quickly.

As the name suggests, a new event occurs every seven days in F1 2020. Usually, it's practice and qualifying on an individual track, such as the USA which we had this week. After seven days, it is time to compete against other players with similar scores to you.

The quests here aren't too difficult compared to others. Of course, the time span to complete these is higher. With one weekly event every seven days, some of these challenges will take about three weeks to complete as well. But the overall time spent on these tasks will be less than for others.

So if you want to be the first among your friends to complete the Podium Pass, VIP membership is advisable. Some of the VIP tasks will gain you an adequate amount of XP for relatively little effort. However, it takes 7,500 Pit coins to buy. So the investment of real money might be necessary.

Series challenges will give you the biggest amount of XP but are harder to complete. The 'Solo' quests are the easiest of the bunch and should be done first. If you have an appropriate online safety rating or ranking, you will be faster than others starting from scratch with the Multiplayer tasks. Try to organize your time and find out what you can do simultaneously. That might save you an hour or two.

Overall, there is no substitute for just putting in the hours. To complete this Podium Pass, you will need to play for an extensive amount of time. Quick players might be able to tackle most things in 25-30 hours. If the payout is worth it to you, then try out our tips of how to storm through the Podium Pass series 4.

How fast did you get through the Podium Pass series 4? Tell us on Twitter at @OverTake_gg!
Did you like this article? Please click thumb up or thumb down.


Submit
Tell us more
Tags: f1 2020, tutorial
By clicking on one of those buttons you are leaving OverTake.gg