eNASCAR champion: "I survived heart surgery to get here"

Last year was a tremendous year for eNASCAR regular Nick Ottinger. Together with his team William Byron eSports the American sim racer reached his goal of becoming the champion of the 2020 eNASCAR Coca-Cola iRacing Series in a thrilling showdown in the final race.

.@NickOttinger is the #eNASCAR Coca-Cola @iRacing Series champion, taking home his first title in the series. 🏆

Watch and listen to his emotional reaction following the win, as it clearly meant the world to him. ❤️ pic.twitter.com/fGny41W7hP

After an emotional press conference, Ottinger went off into the sunset for the off-season. Before the start of this year's eNASCAR Coca-Cola iRacing Series we had the chance to talk to king Nick.

OverTake: Hey Nick, thank you very much for taking the time. After a couple of months, how does it feel to be the eNASCAR champion still now?

Nick Ottinger:
It is still a sense of relief for me. Being at it for nine years and staying competitive, I was always pushing to get a championship finally. I know it sounds like a cliche, but it feels surreal. So many hours go by, day turns to night, and you are still practicing. Each year is not about performance. It is about preparation. You need to be prepared to get to that top level. It is just so tough to stay competitive. To think that the hard work not only from myself, but from William [editor's note: William Byron is a real-life NASCAR driver and the owner of Nick Ottinger's team] and the team paid off was just the best feeling. It is a redemption story, basically.

A quick throwback to the eNASCAR final last year: The reason people point out the exciting nature of this race is the chaos that unfolded during the event. For the most time it seemed like a battle of fromer eNASCAR champion Ryan Michael Luza and Virtual Racing School driver Bobby Zalenski. In a dramatic turn of events, Zalenski crashed Luza into the wall allowing the field to shuffle. Nick Ottinger was on a different tire strategy and thus went for a late push for the race win. Multiple yellow flags gave Ottinger the chance to get closer and closer until he was ready to go for it all.

OverTake: Going back to that last final. What went through your mind until the finish?

Nick Ottinger:
It is hard to describe. We were on a different strategy than the others and that gamble turned out to be in our favor. I mean, who could have written a better storyline? From start to finish, it was a fantastic race, and people felt that. You had so many different storylines, and up until right to the end, it was airtight. Cautions came out at the wrong time for some people, even for myself. I'm usually so focused during the race, and I'm very aware of my surroundings even though I am in a virtual car.

I knew I passed Bobby Zalenski the lap before. At that point, I only needed to make sure he doesn't drive straight into me, and I intentionally went higher to be prepared if he wanted to take a shot. But after turn one, there was no realistic spot for him to pass me again. I knew I would hold onto it but especially after turn four, it just hit me. All this emotion afterward was the expression of our hard work. 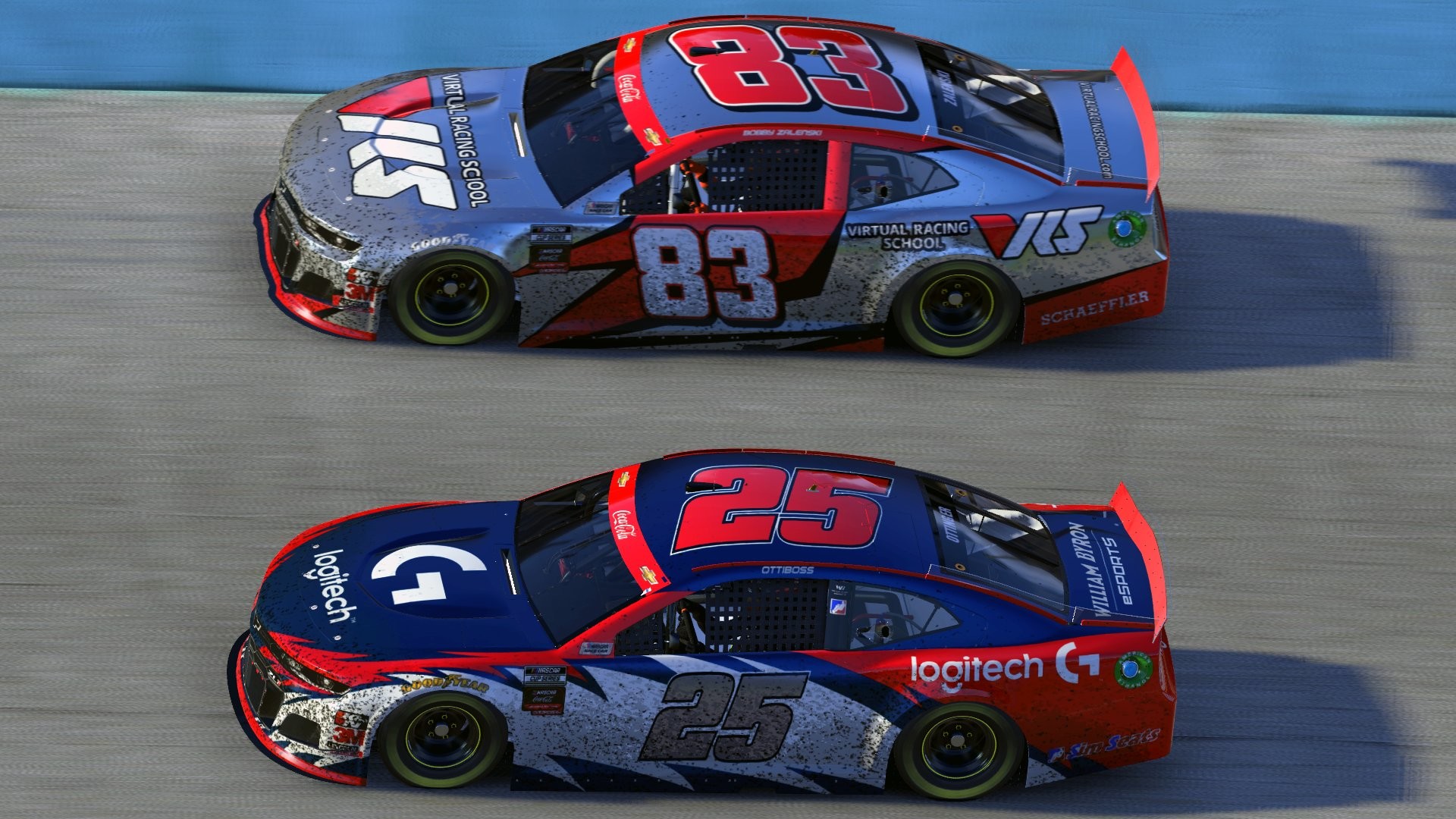 OverTake: Coming into next season, do you think you will have a target on your back now that you are the champion?

Nick Ottinger:
You would be hopeful for being raced the same way if not better than you were the previous year. Last year I didn't have any enemies on the track. Of course, you always have a little bit of a rivalry with others on track if you battle someone for a win, but for the most part, I felt pretty clean last year. People raced me pretty clean but sometimes people race over their heads and try to get more out of the car then there is. So I would wish for respectful racing in general. I am curious by the time Daytona rolls around how people raceme. If they are willing to work with me or try to get around me, I am a champion now.

OverTake: Does the competitiveness help you or put you under pressure?

Nick Ottinger:
It definitely helps me. Ultimately, I love the competitive nature of the eNASCAR Coca-Cola iRacing Series the most. Of course, I hate losing, but if someone is better than me, I can admit that. If I finish second, it's a good day, but I'm not getting paid to lose. I get paid for first places and championships. That's what I expect of me. If I felt I was a 30th place driver every week, I wouldn't want to do it. I would feel like that's a disservice to those who work with me. I like pushing to new heights, and I can't do that if I lose. So I like the competitiveness as much as anybody.

With many new faces coming into the series through the yearly qualifier known as the eNASCAR Pro Series, OverTake wanted to know some details on who to watch.

OverTake: Is there anyone who comes up from the Pro Series this year that you have a close eye on?

Nick Ottinger:
It's hard to say because the Coke series is a completely different world. I think I'd be uneducated if I didn't look at the Pro Series champion Isaac Gann. Even though it's different up here, I have to be realistic and say he is one to look out for. Of course Mitchell deJong, who is an exceptional road course driver and has shown great results in many disciplines. He understands the limits of any car he gets into, and that is dangerous for us. You can't overlook people. After a quarter of the season, we will know who can compete at the top.

On January 22, William Byron eSports announced the driver duo for 2021. A new addition to the team is young American Logan Clampitt. But the best news was the return of champion Nick Ottinger.

OverTake: We heard the happy news that you will stay with your team for the upcoming season. What was the offseason like? We can only imagine you were a hot commodity.

Nick Ottinger:
The thing is, I didn't put myself out there to make sure people knew I was a free agent. I had few offers from other teams, but because of the great relationship William and I progressed to, there was not really another place for me anywhere else. The relationship with William is not only on the business side anymore, we have grown a solid friendship. He has taught me a lot about situations that helped me get better in the car. It is a reciprocal relationship for us, and I couldn't be happier to have him as a team boss. He is so invested in iRacing that it didn't even cross my mind to leave.

OverTake: Lastly, before the next season starts, what are the goals for you?

Nick Ottinger:
I mean, you would love to win every race, but I would love to start into the season with a solid first couple of races. It really builds your morale, and if you fail them, it is tough to dig yourself out of that hole. Also, there are still things I can improve on from last season. So I will be working on them closely. I want to think ahead more. That is a real solid quality for a driver to think ahead as much as possible. Obviously, my main goal is to defend the championship.

A personal one for me is to win more races and really leave a mark in the series. Maybe as kind of a personal story. By the time I was 13, I had to undergo open-heart surgery. I was really into sports as a kid, and I was having a birth defect that caused bad blood flow through one of the main arteries. So at 13, I got my heart valve removed for a pig valve, and they last two to twenty years. It shows the challenges I had to overcome, and I want nothing more but for people to see more of the driver behind the wheel. I had to go through a lot to get here, and I won't go away quickly.

With the next season of the eNASCAR iRacing Series starting as soon as Febuary 8, Nick Ottinger is looking to reproduce his success of last year. We from OverTake wish him the best of luck.

What do you think about the Nick Otting and the upcoming season of the eNASCAR iRacing Coca-Cola Series? Tell us on Twitter at @OverTake_gg!
Did you like this article? Please click thumb up or thumb down.


Submit
Tell us more
Tags: enascar, esports
By clicking on one of those buttons you are leaving OverTake.gg