The famous Circuit de Monaco is one of the most well-known tracks on earth. As it is a key part of the F1 calendar, we players have the privilege of figuring out the tricky track in and out every year. With F1 2020 being out for quite a while, it is time to take a look and dive into the depths of the Monegasque Grand Prix.

With 3.3 km, Monaco is a short track that has incredibly tight and slow sections. Monaco is a street circuit comparable to that of Baku, which is also on the F1 calendar. However, the Azerbaijani track offers a much more open outlook, while Monaco is narrow and slow. 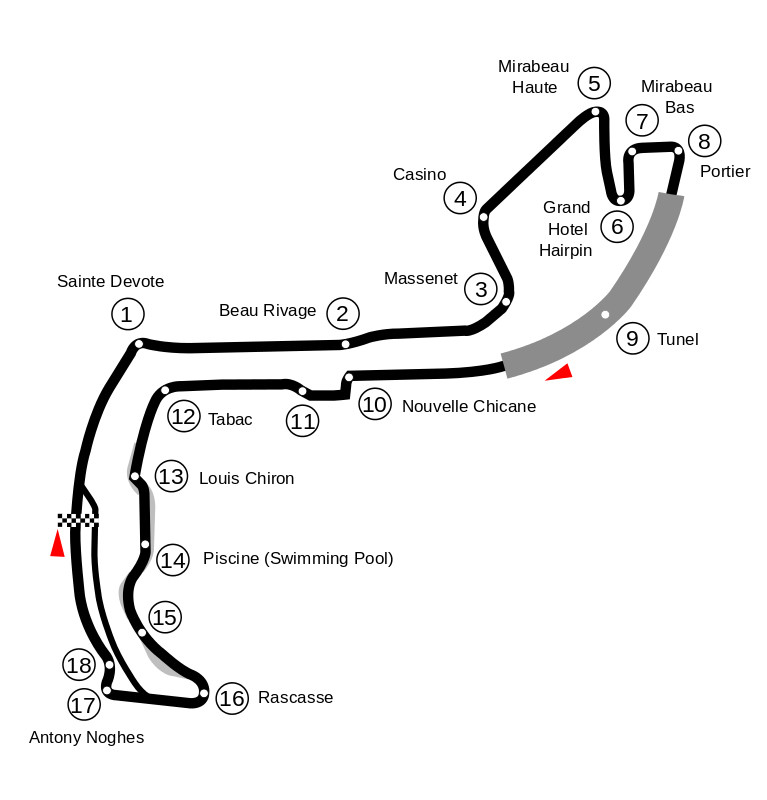 Monaco consists of 18 corners. Most of them are slow ones but turn 13 and 14 are usually taken with near full speed. The same goes for turn 9 at the tunnel. Overtaking spots are few and far between, but one spot to do it is over the start-finish line. The straight is long enough and you carry sufficient speed through it.

“No heroics into Sainte Devote”

Passionate players will surely know the meme of Jeff, the race engineer. Going into a race in Monaco on F1 2019, the voice from the off would almost always say the phrase: "No heroics into Sainte Devote please, we are amongst the pack and need to make it out in one piece." This happened so frequently that it sparked a whole line of jokes that followed.

But there is truth to the statement. Sainte Devote is the Circuit de Monaco's first turn and certainly the most dangerous for some of the first lap hunters out there. If you are too ambitious right from the start, the chance of an accident is high, as we probably have witnessed many times in online lobbies. 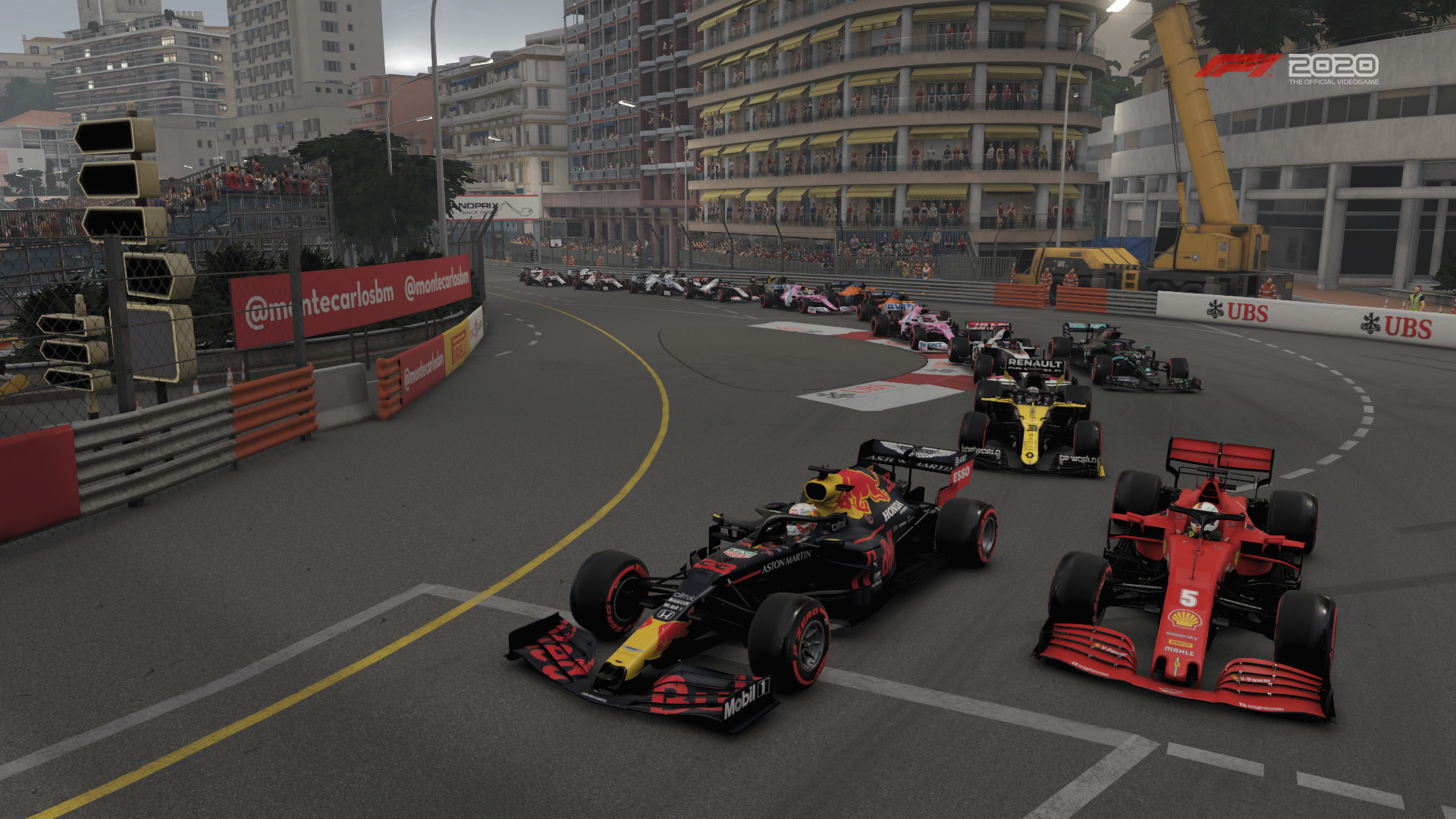 The famous first turn can cause plenty of chaos. Photo Credit: F1 2020/Codemasters.

As the cars approach turn 1, usually a queue of cars starts to build. That is due to the low speed the cars can carry through the corner and its narrow layout. Overtaking is almost impossible here if you want to avoid contact. This doesn't stop people from trying, though. If you want to finish Monaco in one piece, then 'no heroics into Sainte Devote' might be an excellent place to start.

Turns 2 to 5 are usually rather straight forward. There is a small difference in gradient but other than that there is nothing too risky about this sector. Try to stay clear of the wall as much as you can and don’t be too ambitious.

Coming into turn 5, it is a different story. If you do a hotlap, you might get through here very quickly, but in a race, the risk of a queue is high again, especially on the first lap. Be careful and try not to be impatient. If you accelerate too forcefully, be it only by a slight margin, you could damage your front wing and need a replacement.

Turn 5 is super narrow and turn 6 is the Grand Hotel Hairpin. 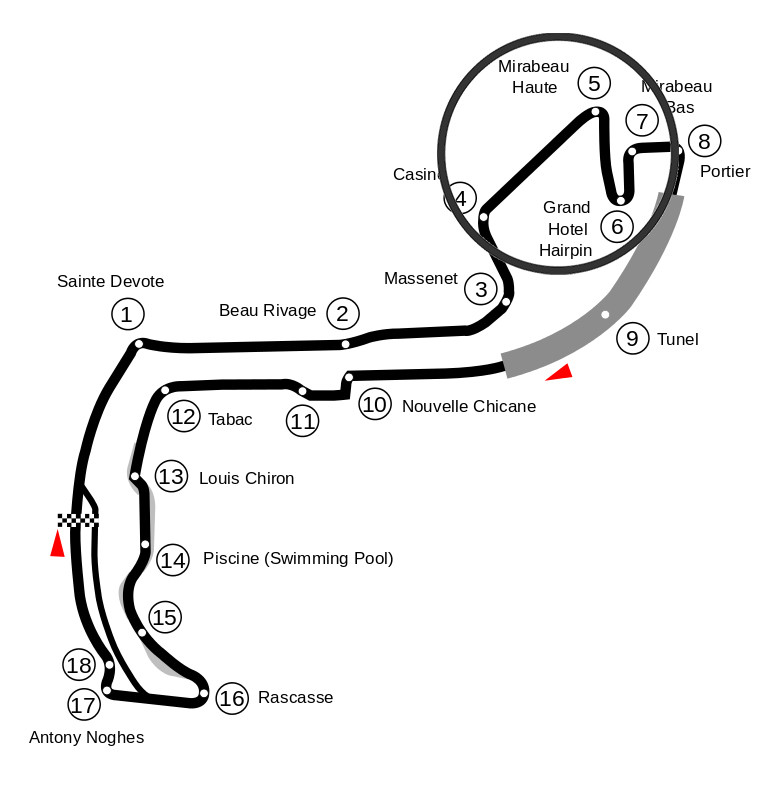 This turn allows for almost no speed. It is usually taken in first gear and takes a long time to get used to. An excellent guiding point is the corner entrance. Try to stay clear of the inside curb as it might make it harder for you to turn or stop you completely. As the corner once again is air-tight, there is no other option to take it. 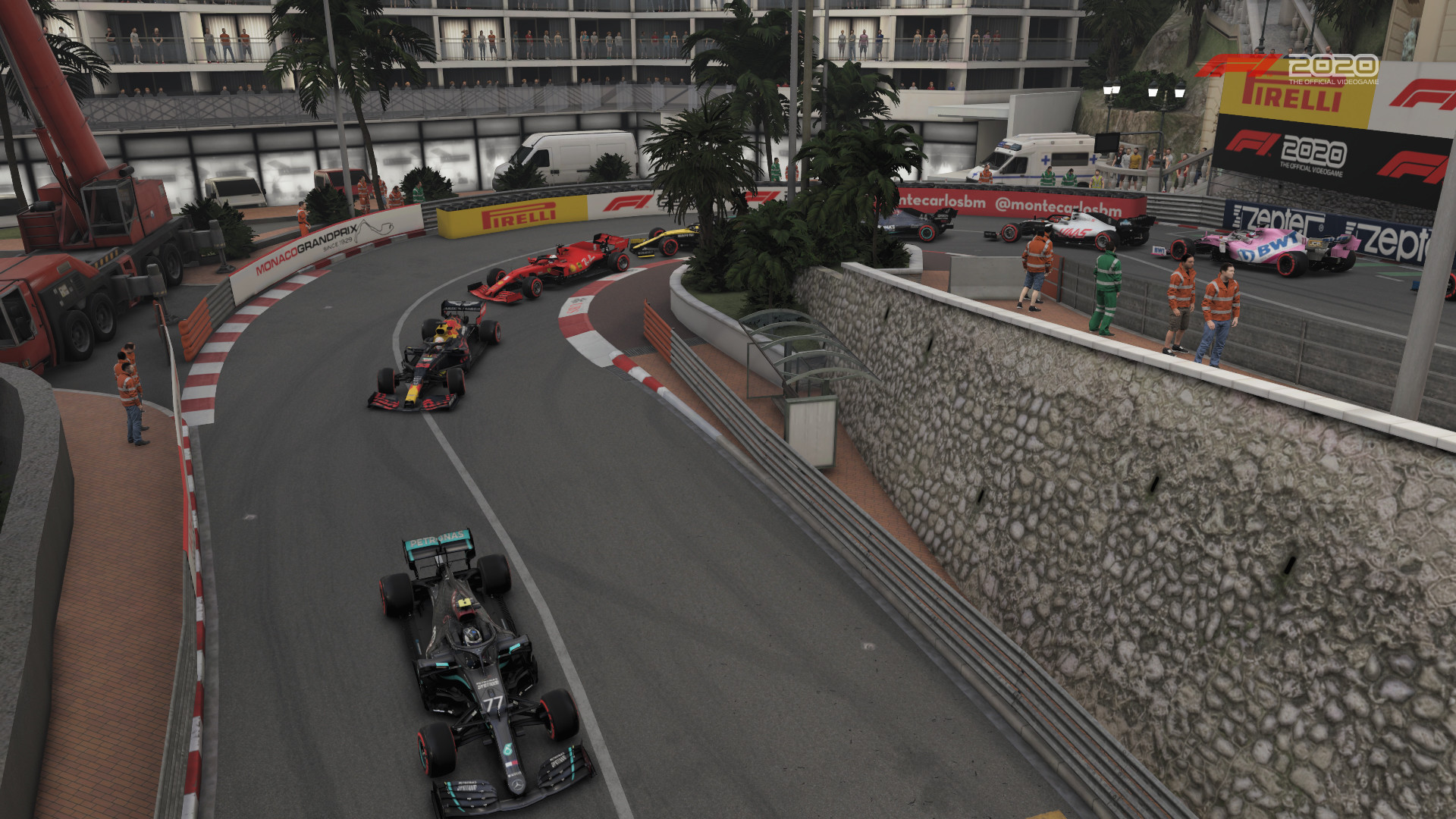 As for overtaking, there might not be a worse spot than this on the track. Regularly a train of cars either damage their front wing here or get stuck and lose multiple seconds to the ones ahead. Grand Hotel will take a lot of time to master.

Here's one thing you might not suspect on a track like Monaco, which is very prominent amongst the F1 games. The problem of track limits comes into play. 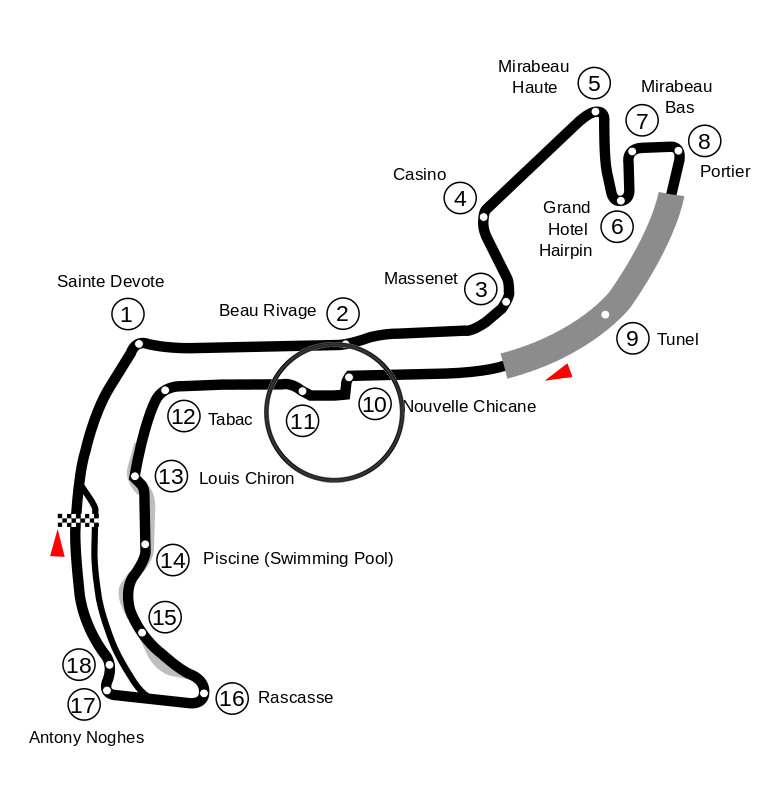 You take these turns after braking all the way down from full speed. Photo Credit: Wikimedia/Rumbin

At the entry and exit of the Nouvelle Chicane at turn ten, there is a run-off zone to the right. To tackle the corner correctly, you will need to take a bit of curb on the inside. If you are just a tiny bit too far off the track, a warning will come your way.

If you collect two or three of those, you will find yourself penalized sooner or later. Because of the few overtaking opportunities and the potential to be held up behind a slower car, a time penalty can cost you much more than you thought. 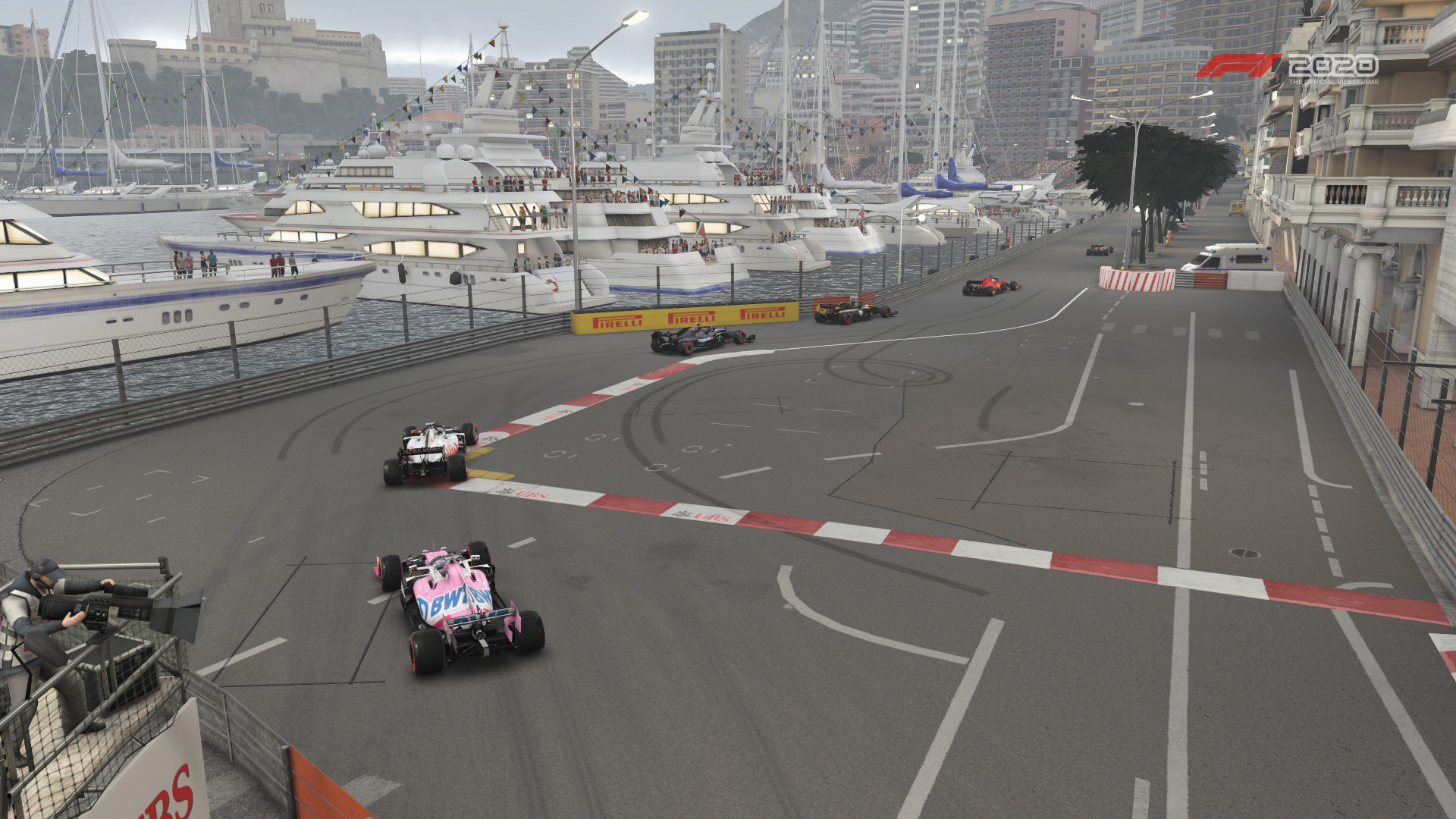 Nouvelle Chicane is a balancing act of the trickiest type. If you go through it too slowly, you will lose time. If you are too fast, you risk a penalty and a potential crash. If you nail both the entry and the exit with not too much curb, you will have a sorrow-free ride through there.

Before we can end our lap, we have to overcome Monaco's last fierce part; the feared Rascasse corner. 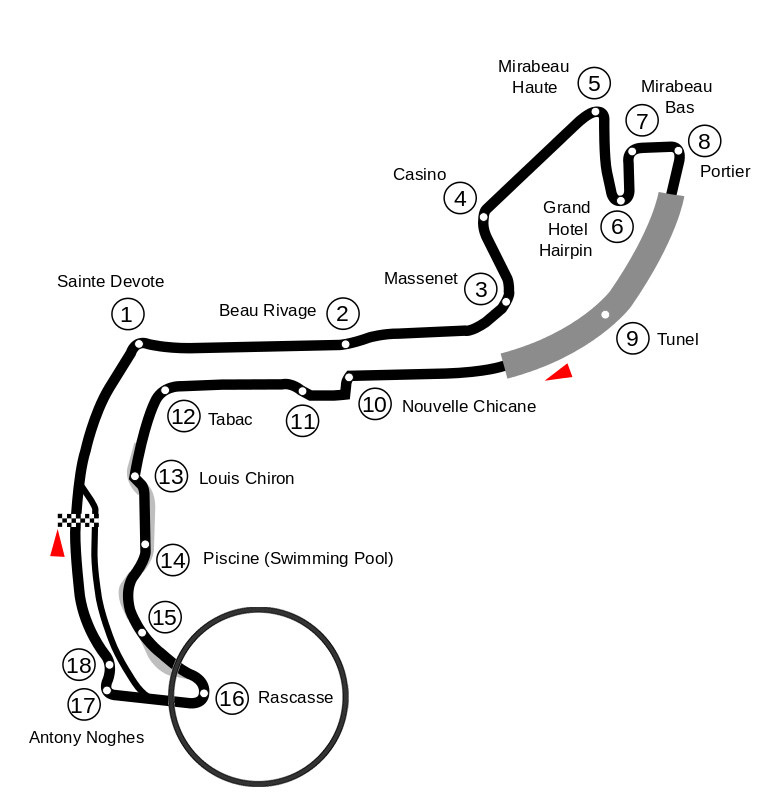 Rascasse offers one of the few hard braking zones after full speed on this track. The turn is a sharp right that makes it easy to carry too much speed into this corner and either lock up your tires or hit the wall. 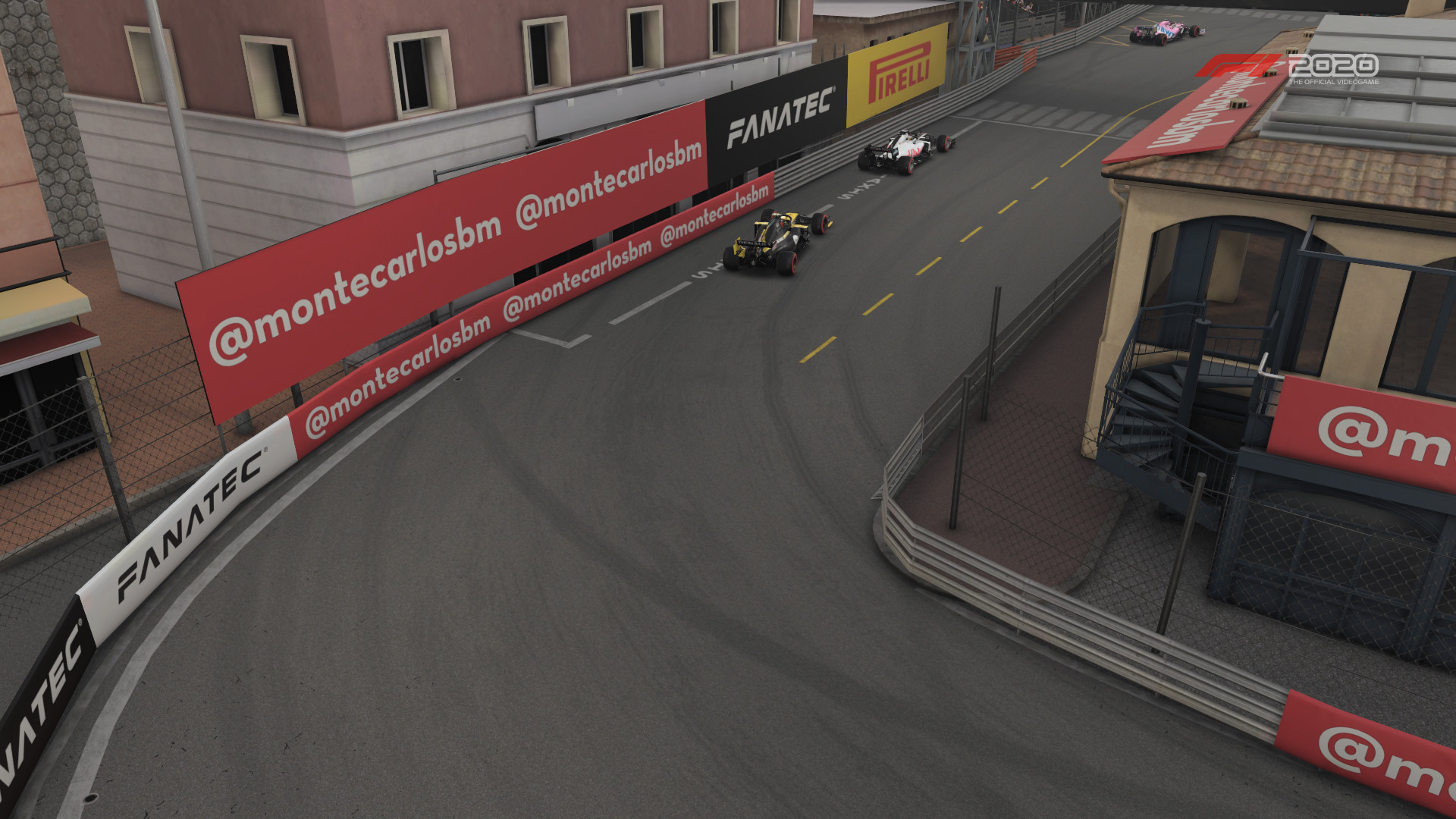 A careless turn in will be punished at Rascasse corner. Photo Credit: F1 2020/Codemasters.

You are best advised to brake earlier than later if you are unfamiliar with the corner. It is possible to carry some speed through here, but it will take practice. Be prepared to take a wider turn as the next corner is another right-hander as well. You should also care for the initial entry into the corner. Your front wing can frequently dink the wall and get damaged.

Monaco's street circuit certainly is one of a special kind. Its narrow layout and tight corners make it harder for you to do something right than mess up. To get a feeling for the track, it is necessary to practice for quite some time. Maybe more than for other circuits.

If you drive a hotlap format, some variables can be neglected. There will be no traffic, and thus some sections like Grand Hotel will be easier to take. But in a race, there is always the possibility that you will get stuck in a train of cars. You need to stay patient to escape unharmed.

Monaco requires full concentration as the slightest mistake will leave a mark on your car. Because the overtaking opportunities are almost non-existent, you mustn't have to pit lap one and rejoin at the back of the field. If you stay as clean as possible and avoid car damage, you will be in a good position for any race at Monaco.

What is your favorite part of the famous Circuit de Monaco? Tell us on Twitter at @overtake_gg or in the comments below!
Did you like this article? Please click thumb up or thumb down.


Submit
Tell us more
Tags: f1 2020, tutorial, gaming
By clicking on one of those buttons you are leaving OverTake.gg