MotoGP: The ups and downs of esports racing on motorbikes

Passion and training made AndrewZH MotoGP Champion of 2019 – these were his hardest challenges.
Photo credit: MotoGP

When talking about motorsports and racing, most people immediately think about Formula 1 and NASCAR – or, when talking about esports, their respective virtual counterpart in the F1 games or eNASCAR. In both cases, racing is generally associated with gripping action on hot asphalt, professional athletes aiming to push their four-wheelers to the top. Especially in esports, we can get so worked up in F1, iRacing, rFactor 2 and countless other games, that another crucial but less represented discipline doesn't always get the limelight it deserves. Swap four wheels for two and you'll know what we're talking about.

Motorbike racing is an undisputed and thrilling category in the real world – and so it earns its place in esports racing as well. As one of the biggest tournament organizers of the discipline, MotoGP made the leap into virtual racing in 2017. Ever since, the MotoGP eSport Championship on the official MotoGP game is an annual highlight in the world of esports motorbike racing.

But after all, what is it like competing in a virtual MotoGP event? What does the setup of an esports racer on motorbikes look like? We took a closer look into the scene and spoke to 2019 MotoGP Champion Andrea 'AndrewZh' Saveri to understand the merits and challenges of virtual racing on motorbikes a little better.

Fairing bashing, determined performances and a lot of drama! 😮

For esports racing in cars, an important component of the racer's performance is the setup they race with. Even for non-racers, this is quite easy to imagine: a monitor, a console or PC completed by a steering wheel and usually pedals – the additional gear specifically for esports racing. WHowever, when driving a virtual race on a motorbike, the simulation's means are a little harder to imagine. In real-life, the vehicles are steered not only with the handlebars, but the entire bodyweight of the driver – how can this be enabled in virtual racing?

The simple answer is: For the most part, it can't. Although there are indeed first attempts at generalized motorbike simulation rigs – for example the Moto Trainer seen below – they are not really affordable or put into professional practice just yet. For the time being, MotoGP esports racers simply use controllers to excel on the virtual racing track.


The MotoGP Esports Championship uses the official MotoGP 20 game compatible with various platforms. The versions for PC, PS4 and Xbox One are eligible for the virtual series, meaning that drivers only need one of the mentioned media and their preferred controller for the racing action. With the required equipment looking almost minimalistic compared to car sim racers' setups, motorbike enthusiasts might face an entirely different racing situation from them. 2019 MotoGP Champion AndrewZH told us about the positive and negative sides of both worlds:

In my opinion, [both disciplines] are very similar in several aspects, perhaps in car races an esports racer needs to work more on the setup, but I feel that it’s easier to keep a constant race pace there than in MotoGP eSport. In MotoGP, on the other hand, I think it is more complicated to be neat and precise, which is what makes it special for me. In the end, it's the concentration that is crucial to perform well in both kinds of races.

For comparison, let's imagine handing a professional car sim racer a simple game pad and asking them to perform in an accurate simulation game. If we're honest, most candidates would simply laugh at the request. While racing with a controller is absolutely feasible, a majority of pros in virtual racing would swear on steering wheels to enable their best performances. The reason: The better the wheel, the more adequate the force feedback. Ultimately, this is the base for the driver's responses to and control over their car.

So, while esports racers on motorbikes have the financial advantage of the simpler setup, there is a downside to that. Without the entire feedback process through the vehicle underneath them, one of the biggest challenges in the esports category is undoubtedly precision. And with fellow contenders hot on their heels, drivers obviously master more than just the technical side of things. AndrewZH sums up the most challenging parts of his career:

Being precise and neat on the race pace, managing the pressure and constantly being in order to stay at the top level every year is really tough for everyone.

Going pro in any discipline, no matter if real-life or esports, is never easy. It requires an outstanding amount of passion and dedication – and AndrewZH has both of these. Having been interested in motorcycles and video games since he was a child, playing MotoGP was a hobby of his long before 2017, when he first thought about becoming a professional racer.

I thought I could get near [the leaderboards] or even improve those records, I decided to give it a serious go and in a few months of training I managed to be up there in front of everyone. Then in 2018, at my first try, I qualified at the MotoGP eSport World Championship finishing in third position overall. [My] result improved one year later in 2019 when I became the world champion. 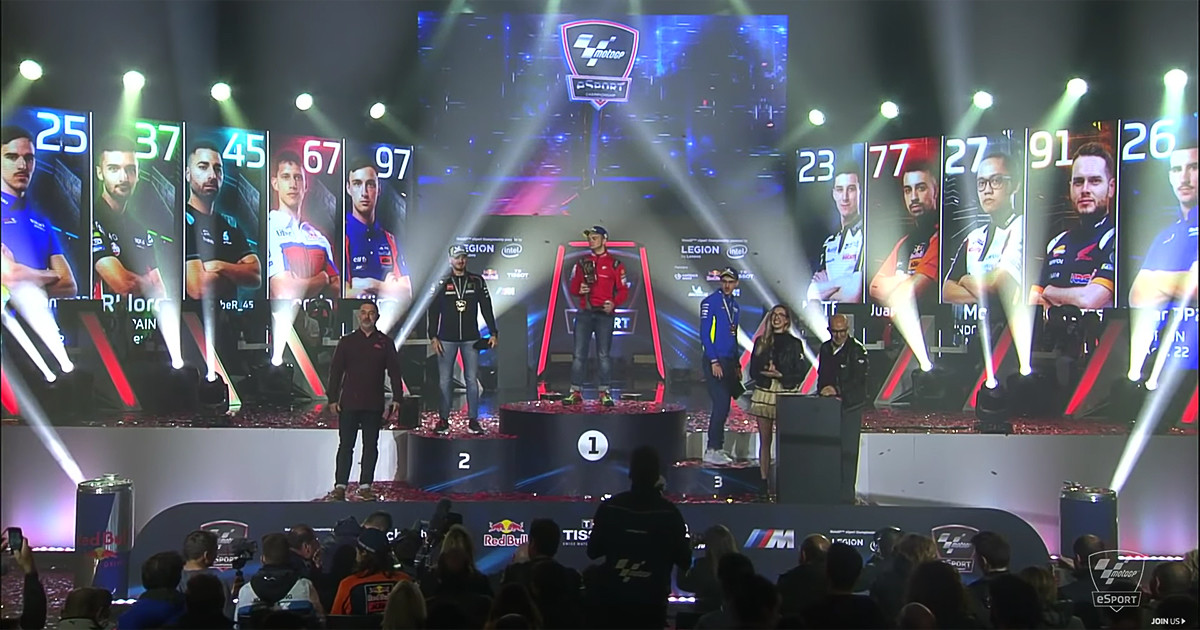 AndrewZH and his fellow contenders after the race that made him MotoGP Champion in 2019. Photo credit: MotoGP eSport

For AndrewZH, winning the 2019 championship in Valencia was by far the most rewarding moment of his career so far.

It was a moment where work, dedication and willingness have fully paid off. Every day I strive to improve myself to relive that experience. It is something that words alone just can’t describe.

While the former champion keeps on fighting to win back the trophy from last year's victor Adrian 'Williams_Adrian' Montenegro Sanchez, he knows exactly which virtues will lead him to the podium in the end.

[...]Passion, commitment, and willingness. If you are passionate about the real counterparts you get to understand the video game even more as we are talking about simulation and not arcade games; in fact, you can apply in-game whatever you see happening in the real races. Another quality is to be able to maintain a constant focus, you should always strive to improve your own performances and never give up on this.

If by now, you have fallen to the fascination of MotoGP yourself, there are plenty of other things you can learn from former champion AndrewZH! No matter if you're a complete beginner or need to fine-tune the details of your performance, his tutorials on OverTake will teach you just what you need to know. Check them out below:

What do you find most interesting about virtual racing on motorbikes? Tell us on Twitter at @OverTake_gg or in the comments down below!
Did you like this article? Please click thumb up or thumb down.


Submit
Tell us more
Tags: competitive, tournament, esports
By clicking on one of those buttons you are leaving OverTake.gg