The rally game that was created in a camper van

Out there, it is only you against the elements and your own fear. You drive your car through mud, sand and on narrow forest roads. While you push the pace to the maximum, you do not know what lies beyond the next corner. As you pass the spectators by just centimeters, one small mistake is enough to end in disaster.

Rally is unlike any other motorsport on this planet. It is fast, dangerous, and extremely challenging. The game Art of Rally paints a minimalistic yet beautiful picture of the sport. Just like the art style of the game, the story about its development is unique and fascinating.

“Vancouver is one of the most expensive places in the world,” Dune Casu states. Buying a house in his hometown is more expensive than it is in London, Los Angeles, or New York.

In 2015, this fact caused the Canadian a dilemma: he had just released his first game, Absolute Drift, which he developed while still living in his parents’ house. “I wanted to move out after the release,” the 30-year-old remembers. But finding a new home was difficult and so he came up with another idea: buying a camper van and converting it into a mobile home. “In the beginning, it was just a traditional metal cargo, a bare shell. I added a kitchen, a bed, and solar panels as well as power and storage,” the programmer recounts. After some first testing trips, a long journey started which ended in the release of his second game, Art of Rally. 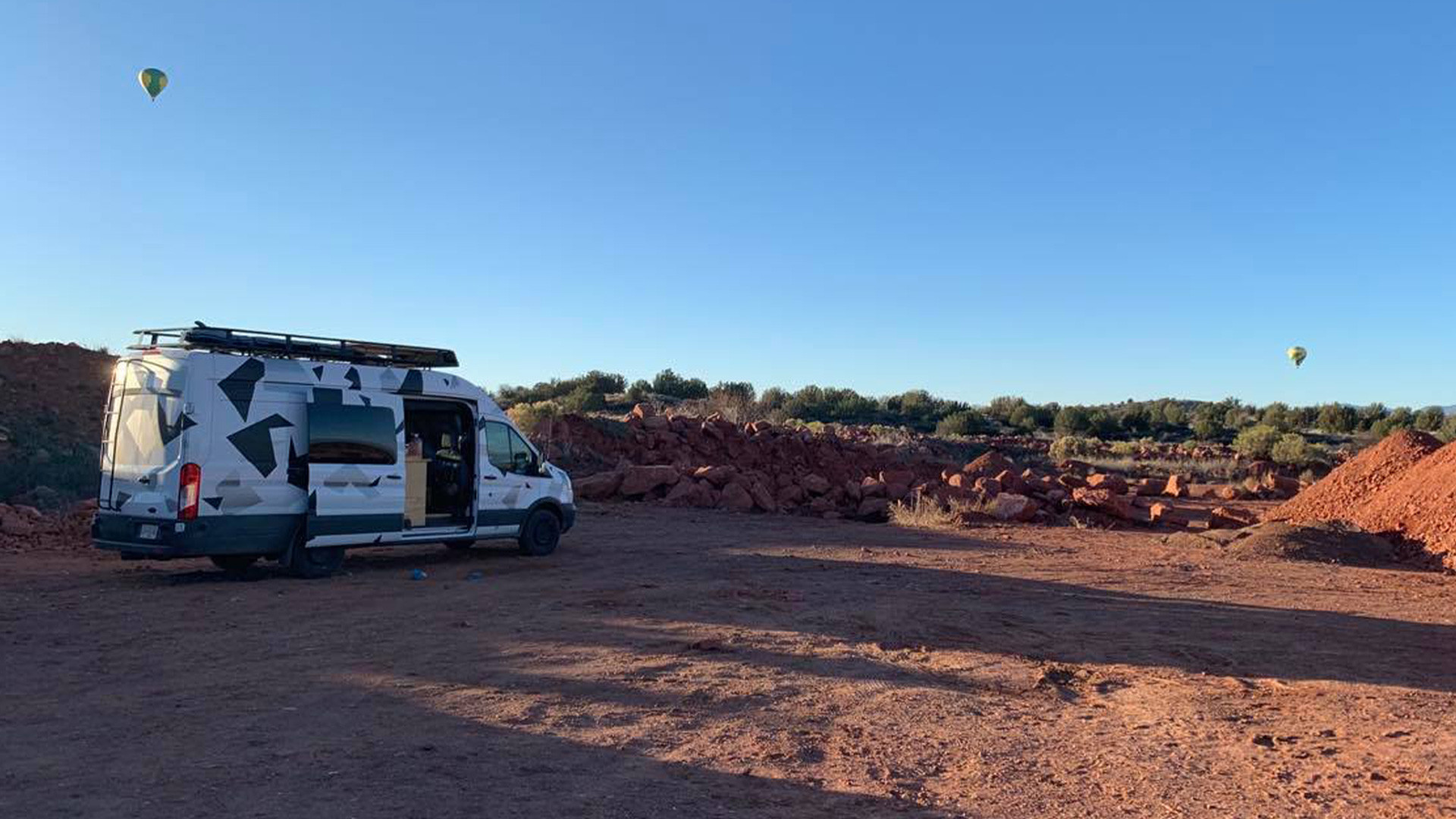 This van was Dune Casu's home and workspace for some time. Photo credit: Dune Casu.

“At first, I mainly took the van out to take part in a mountain bike racing series,” Dune says. The Canadian has been passionate about the sport since growing up. “At the same time, I’d be working on the game in the van.” His mobile home took the developer all across the North American continent. “I travelled around Canada, the US and Mexico and had crazy adventures,” he says.

On his road trip, Dune would visit the most amazing places:

I really enjoyed Colorado, Utah and Arizona. I spent a lot of time there. It’s just very dry and good weather and also you have lots of sun for your solar panels. And the sunsets are gorgeous. In Mexico it was fun too. You would just be on the beach all by yourself working and hanging out. It was pretty amazing, I miss it. 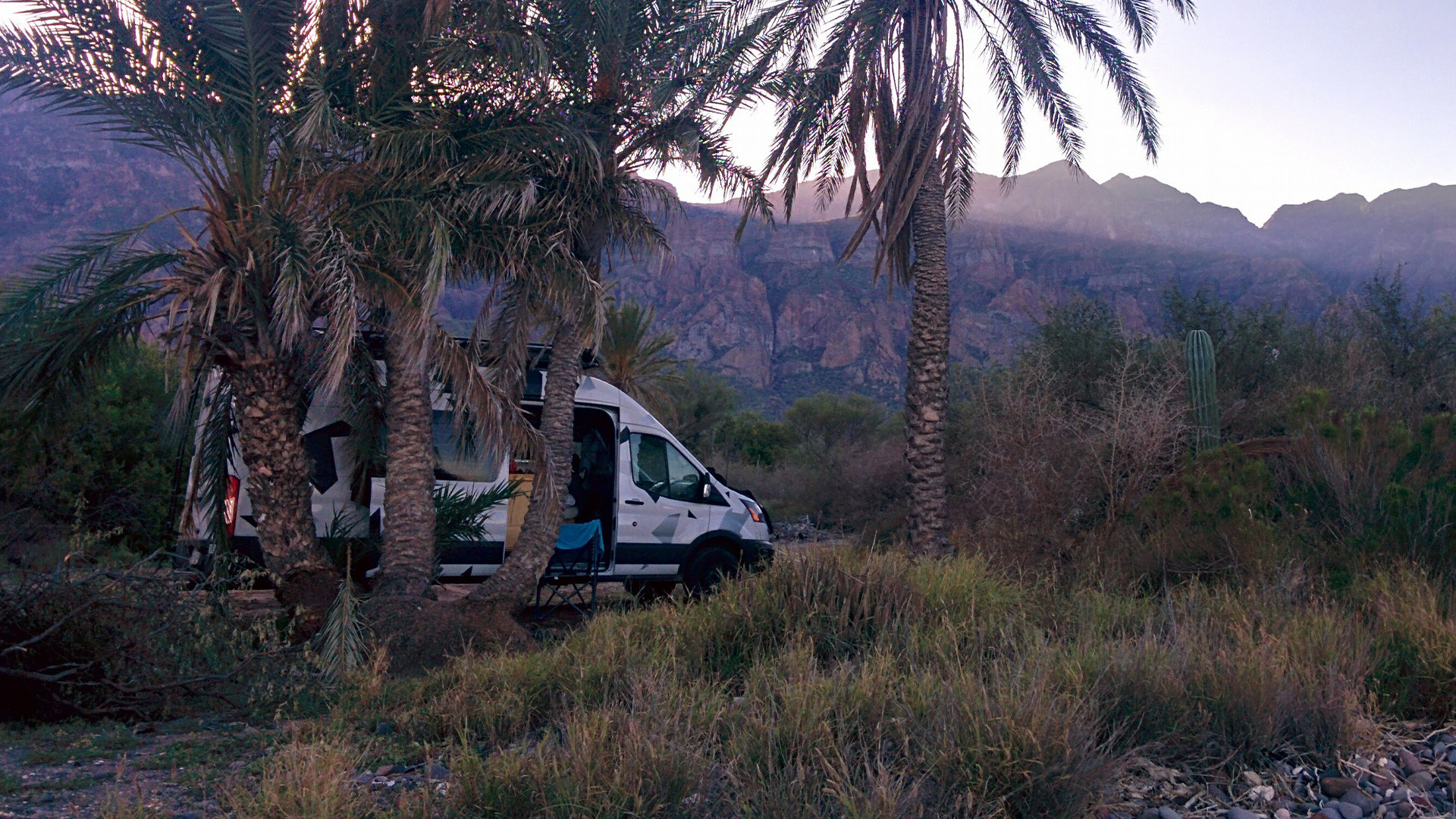 The developer had a workplace others could only dream of. Photo credit: Dune Casu.

Every now and then, Dune came home again to see his family and polish his project. “Half of the game was made in the van and the other half in different places. Basically, I would do a big round trip and come back to my parents or to my sister. I worked there for a few months and then go again,” the Canadian reveals.

Dune Casu: A rally fan all along

Being out in wild nature on four wheels: Dune’s way of living matched perfectly with the motorsport he was creating a video game about. His adoration of rally had been there ever since, he excitedly explains: “I played a ton of Colin McRae Rally games. And DiRT 3 is one of my favorite racing games of all time.” 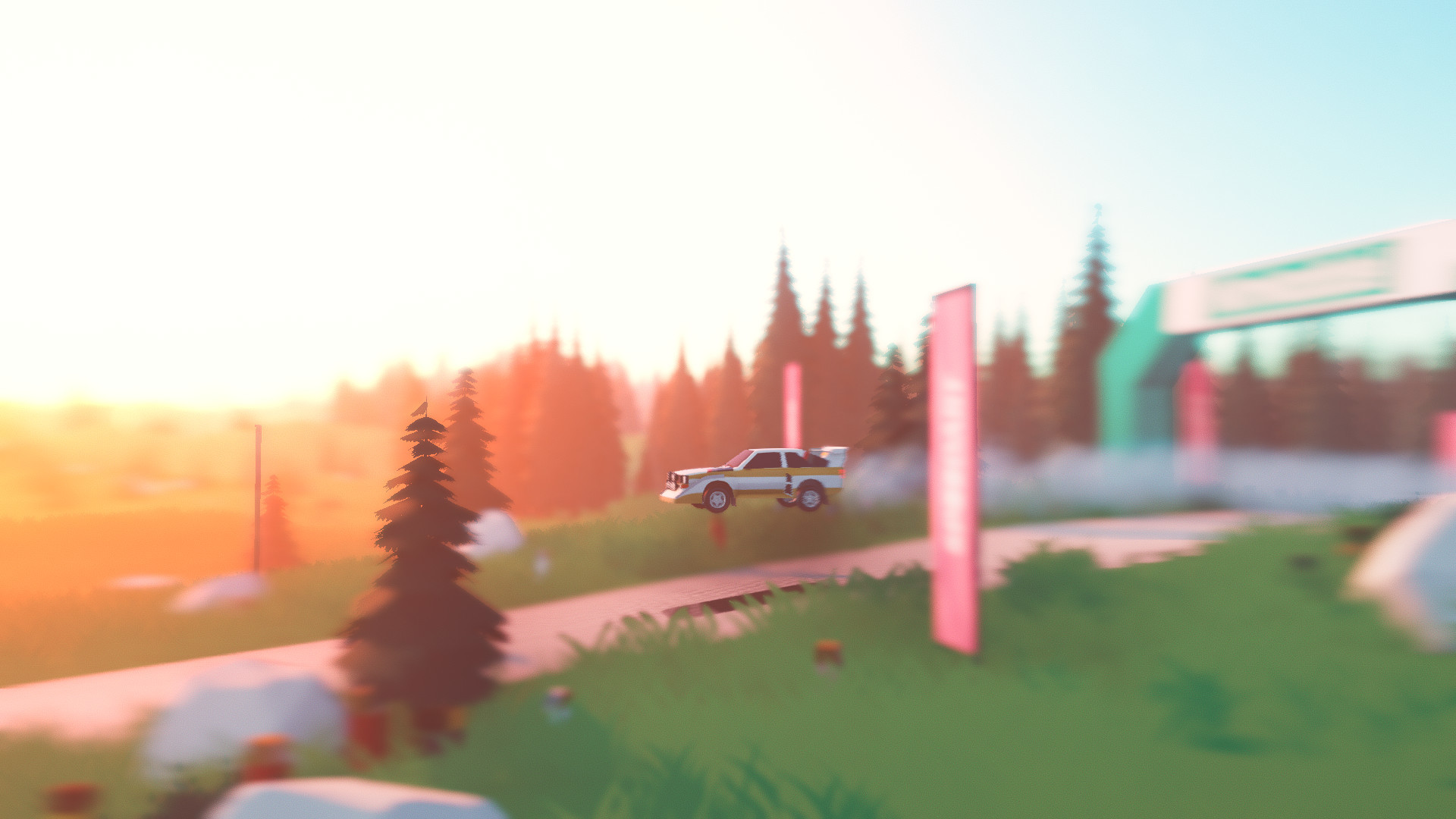 Dune's love of rally can be found in every detail of Art of Rally. Photo credit: Dune Casu.

The young Canadian has also been a motorsports enthusiast since childhood, but could not afford to follow that passion. “My friends had some karts and stuff, but it was just completely out of my realm,” he remembers.

With all those passions, it is no surprise that Dune would sooner or later start developing a rally game. His passion for the sport was reignited during the development of Absolute Drift, he reveals: “I watched this web series about the Subaru rally team in America. From there on, I was just enamored with rally and wanted to make a game about it.”

Little vacation and no backups

Back on the road. Even though Dune visited deserts, beaches, and the mountains, he would not spend his entire day just sightseeing and relaxing. “I was definitely having fun and doing different activities,” he recounts. “But I put most of my time into developing the game. So, if I went rock climbing in the morning, for example, I would come back and work in the evening. I was pretty disciplined.” 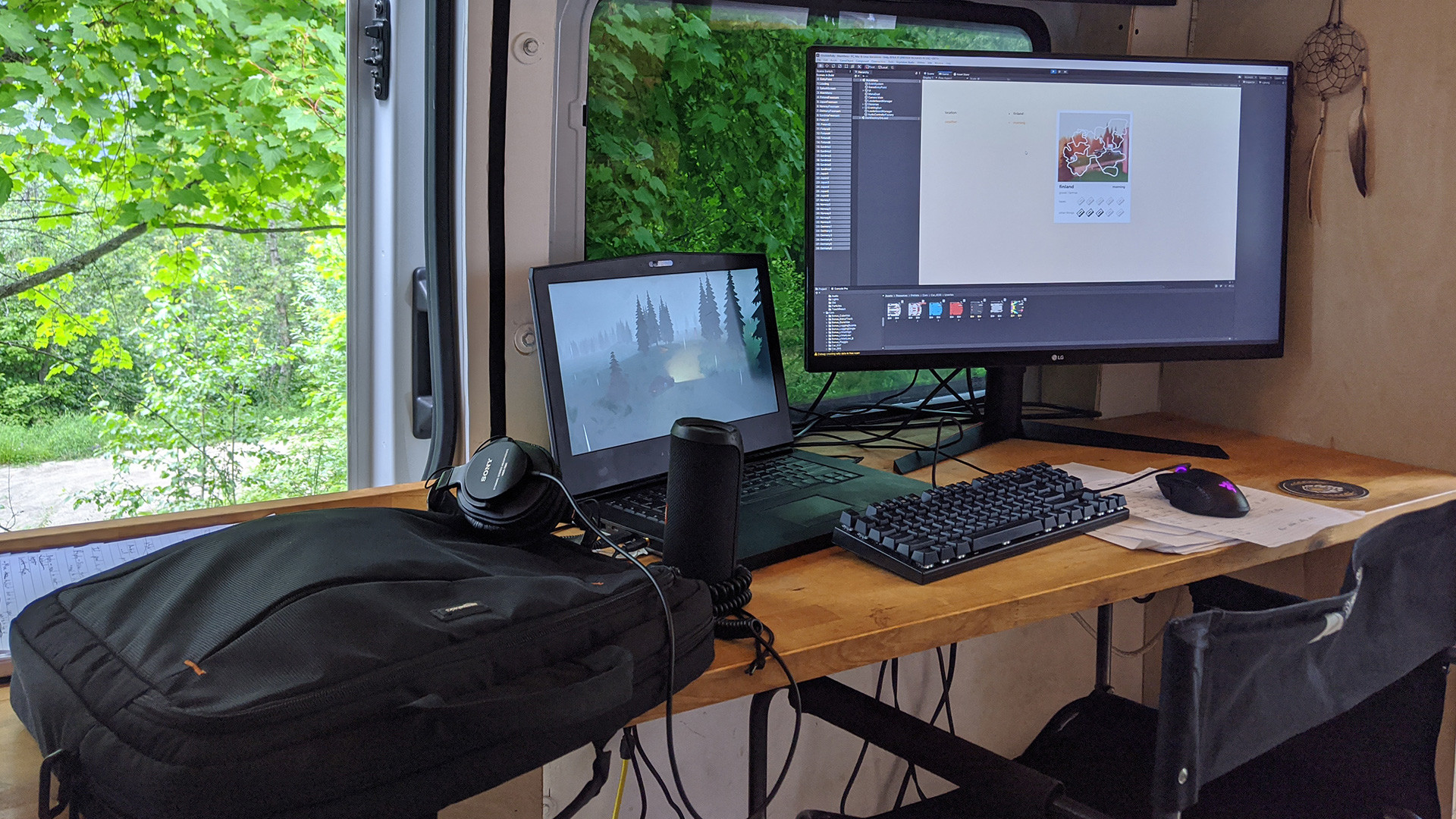 But working in a mobile camper also led to some problems. “I did not know how to hotspot my phone back then which means I had no internet for a long stretch of time,” Dune tells, laughing. “It meant that I could concentrate even more.”

However, Dune was not able to upload a backup of his work for certain timespans. “I was always worried about work. I faced lots of different weather types. In Mexico it is extremely humid and hot, which can wreck laptops. If anything broke, my plan was to rip apart the laptop and take out the hard drive.” Of course, as soon as Dune found Wi-Fi, he would upload his work to save it.

How Dune’s journeys influenced his game

All the experiences Dune had on his journeys with the van left their positive marks in Art of Rally. “A lot of the nature we saw definitely influenced the game. And also the lighting. That stuff is complex! To actually know how all the lights look helped. But I am still learning about it, too,” Dune admits. 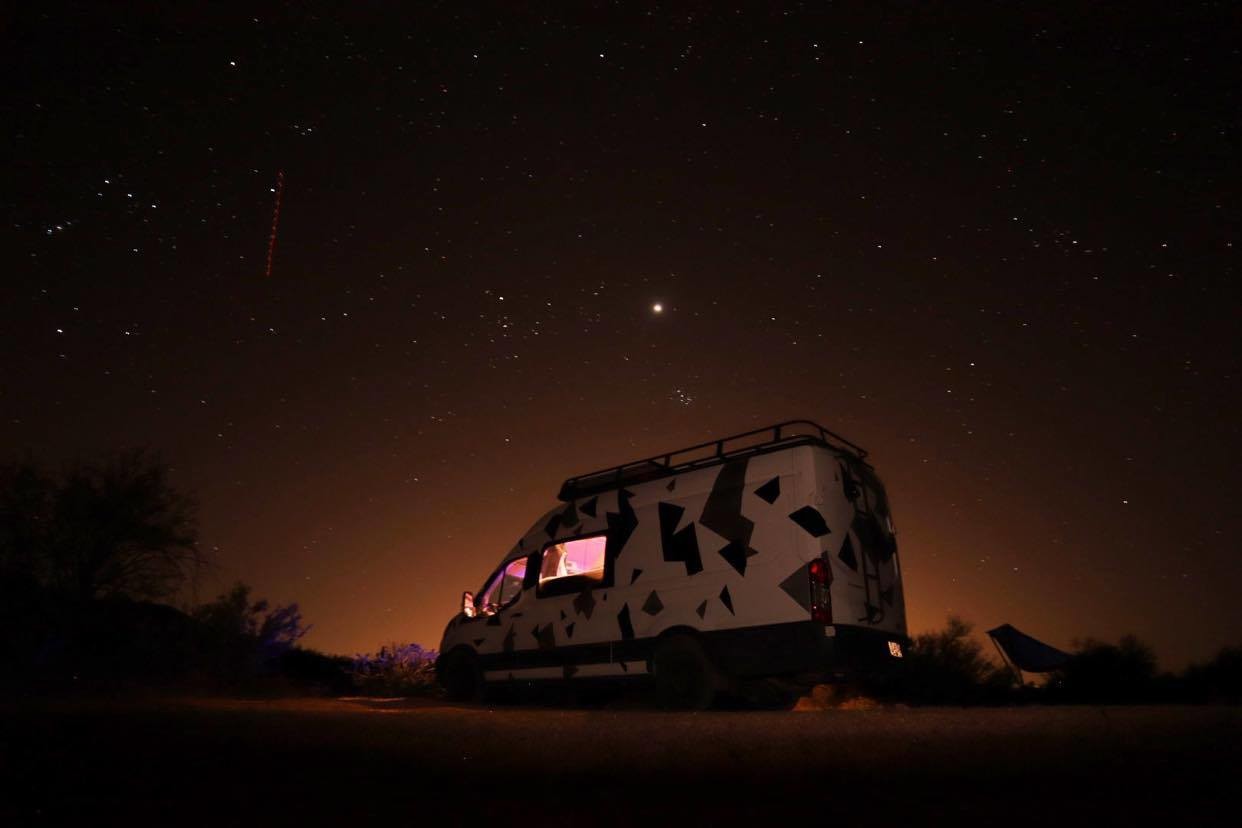 All the things Dune saw on his road trip influenced the development of his game. Photo credit: Dune Casu.

Besides his road trips with the van, Dune Casu also travelled some more to gain the knowledge he would need to create a rally game. In New Zealand, he visited a rally driving school to get a feeling for the cars. “They had all these old WRC cars from the nineties,” the developer recounts. Never having driven a rally car before, Dune was able to learn the basics of the sport there, and also about its dangers. “If you make one mistake, you’re in the bushes or spinning out. I almost crashed a few times in New Zealand,” he remembers.

Nevertheless, the developer was hooked and went on to learn more in a DirtFish rally school in the US. “That is where I got my actual foundation for rally skills. I felt a lot more confident after the few days I spent there.”

In the final phase of his project, Dune gathered a small international team which helped him to polish the game. But in the end, Art of Rally tells the story of its development.

Dune’s journeys with the van inspired him to create blooming landscapes. His rally school visits contributed to the challenging handling model. And most importantly: his passion for the sport can be found in countless details you barely find in any other game in the genre.

The outcome is a minimalistic, beautiful and unique love letter to the good old days of rally.

On to the next adventures?

Today, Dune Casu no longer lives in his camper van, but has found himself a solid place in Vancouver. It might take some time until he goes on his next road trip. “We are still finishing Art of Rally. We are going to add more updates,” he says.

But his mobile home and development studio won't just sit there gathering dust. “Once the summer rolls out and the updates are all out, I have plans to get back in the van again,” the Canadian says, smiling.

Art of Rally was released in September 2020 for Windows, Linux and Mac.

How did you like the story behind Art of Rally? Tell us on Twitter at @OverTake_gg or in the comments down below!
Did you like this article? Please click thumb up or thumb down.


Submit
Tell us more
Tags: meta, personality, interview
By clicking on one of those buttons you are leaving OverTake.gg