How to hit the ground running as an iRacing beginner

iRacing can seem overwhelming. We are here to show newcomers the way to go.
Photo Credit: iRacing

The world of sim racing is rich with all kinds of great games and challenges. One of these challenges is to get into the scene in the first place. Even for experienced gamers that have put hours of time into games like F1 2020, iRacing will present a different task. So let's take a look at how you can start with iRacing in the best possible way.

To be brash, sim racing is an expensive hobby. Especially sims built to resemble realism as much as iRacing can cost you a dollar or two in the process. The first expense that needs to be covered is equipment. While games like F1 are very controller-friendly and allow players with gamepads the opportunity to compete against rigs, iRacing is different. While the possibility of using an X-Box or PlayStation controller exists, you won't find success in that. With a wheel and pedals is how iRacing is meant to be played.

Of course, you don't need to buy the most expensive equipment possible immediately. There are plenty of second-hand sellers and discounts on online retailers that make wheels and pedals affordable. Take a look at some of our hardware reviews to find the wheel to fit you.

iRacing also demands a subscription to get racing. The prices there can range from $13 a month to $110 a year, depending on what kind of membership you choose. Naturally, there are some things that come with this subscription. In total, 16 tracks and 22 cars are unlocked by completing the purchase of an iRacing subscription.

This is not all the content the service offers. Most of the cars and tracks are purchasable via the store. As you progress through the game you might have the itch to go beyond the free content. If that is the case, you can check out our guide to get a small overview of the prices and possible expenses that come your way.

If you have decided to invest your money in iRacing, you might be thinking it is time to take on other players on track, right? Theoretically, that is possible. However, much more advisable is a considered approach that includes being on your own for the first time.

If you open up the iRacing UI, you can easily set up a lobby to race against AI opponents. This has the upside that you won't face any punishment if you end up ramming into someone or ruining your car. Practice will be mandatory. Especially if you are unfamiliar with your hardware setup or the car you drive. If you go to the section AI racing in the iRacing UI, it will allow you to create a private lobby. The settings you need have also been covered by us in the past as well.

Typically, the starting car for a lot of racers on iRacing is the Global Mazda MX-5 Cup. Your best option is to take a track from the starter pack and the Mazda to get into the groove. 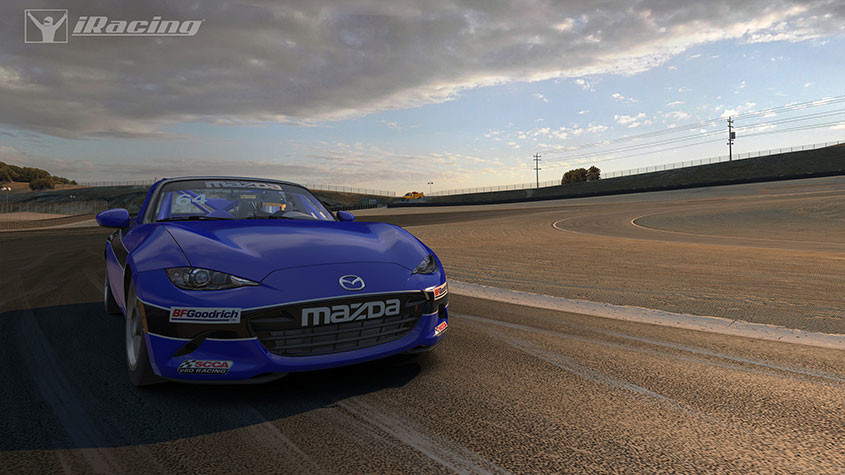 The MX-5 is a great car to drive first. Photo Credit: iRacing

Once you have gathered a feeling for the car or your hardware, you can join a practice session. Be careful though, because punishments are dished out here as well.

Once you feel like you are ready and set up well enough, you should make yourself familiar with iRacing's online races' rules. Many say iRacing is the strictest sim out there regarding how to deal with bad behavior. So a look at the 'Sporting Code' is necessary.

Adding to that, it is crucial to understand iRacing system of ranking. There are two types of ratings that each influence your standing in the iRacing realm.

The Safety Rating (SR) is mainly used to determine which drivers race cleanly, and which don't. Safety Rating can influence your license class. If your safety rating is high enough, you will go up a license class at the end of the season and vice versa. Your SR will take hits if you are involved in more accidents, so try and stay clean as much as possible.

There are five standard license classes on iRacing: Rookie, D, C, B, A. Also available are WC and Pro, but since this is focused on beginners, there is no need to worry about these at the start. License classes allow you to partake in specific series or races. A loss of a license class can mean the inability to race a previously raced series. 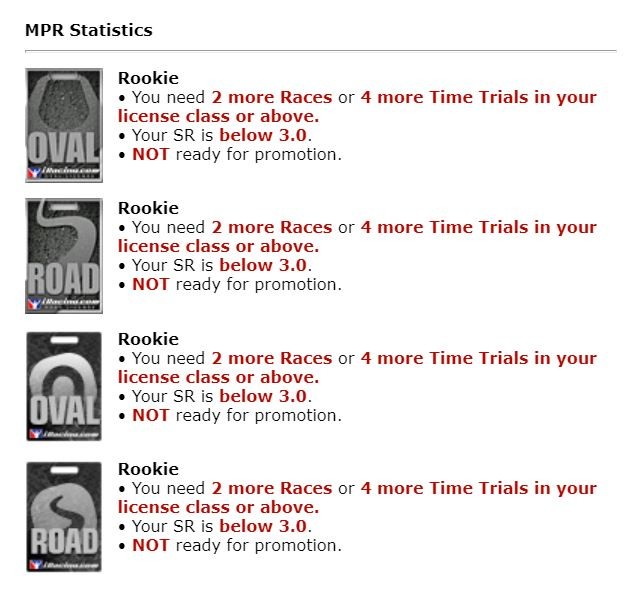 There are criteria from iRacing that show when a player is eligible for promotion. Frequently the licenses of beginners look like this:

iRating is iRacing's attempt at an Elo-system. You start with a value of 1250. Based on how well you do, you can gain or lose rating. A higher iRating means better competition. If a lobby is overfilled, it can get split. The higher your iRating, the more likely you are to end up in the top split.

You gain iRating by playing well in races with a good Strength of Field (SoF). This term explains the relative iRating the lobby has. So let's say ten racers have around 3,000 iRating, the SoF might be 3,000. If you have 2,000 iRating and place in such a lobby, you will gain a substantial amount of iRating. The same goes the other way around. If you bin your car in the first lap of a lobby with a weak SoF, you might see your rating drop by quite a bit. In short: Beat better players to gain iRating.

Take part then take over

iRacing runs four seasons each year, with each of them lasting 12 weeks. Different series will take part during this time, and once you have done your research and preparation, you may want to join one of them.

Many series are based on car classes and have a schedule of tracks that are raced during the season. You can usually see the program before joining the series. To proceed, it is necessary to have a car from the required class and every single track that the series is visiting. There are different types of restrictions a series can have.

A series starting screen can look like this. Photo Credit: iRacing

Fixed Series only allow a particular setup that every driver has to race. This way, every car essentially has the same prerequisite.

Multi-Class Series don't only feature one class of car. There are multiples of them racing at the same time on track. Often it is something like LMP 2s and GTEs.

Team Series is what the name suggests – a squad-type competition. Usually, series like this include endurance races, which can be very tricky to handle for beginners.

More than anything, iRacing is a learning experience. Some say that sim racing has problems with accessibility for newcomers, and there is certainly truth to that. iRacing is not built for casual racing game fun. It is a time-intensive hobby, and if you are used to games like GT Sport or F1 2020, you will need to adapt in a lot of situations.

Starting from the payment side, it is vital to have the hardware to support your endeavor of starting iRacing. A wheel and pedals don't have to cost a ton of money but will be more expensive than a gamepad in most cases.

You will have to look out for the content you need. Often there will be discounts on iRacing for subscriptions or specific content. If you stay patient, you will save some money. It might take some time to get used to iRacing. Start by racing the AI or on practice servers. After that, you can sort your way through the world of the series and ranks.

iRacing is challenging, but a whole lot of fun once you get rolling. So if you made the choice, you can follow these steps to get started.

What do you want to know about iRacing? Tell us on Twitter at @OverTake_gg or in the comments down below!
Did you like this article? Please click thumb up or thumb down.


Submit
Tell us more
Tags: tutorial, iracing
By clicking on one of those buttons you are leaving OverTake.gg