MotoGP 21 – What does a pro expect from the game?

With the official, real-world MotoGP season well underway, sim racers don't have to wait much longer to lay their hands on the virtual counterpart of the infamous two-wheeler series. The MotoGP 21 game will launch on the cross-gen platforms of the PlayStation and Xbox as well as on PC and Nintendo Switch on 22 April.

Developer Milestone is not shy to promise fans an "unprecedented experience" with the next generation of their simulation series. And the new game will surely introduce some changes. Features such as the "Managerial Career" modus and new customisation options for bike and rider definitely lean more towards casual gamers, whereas adjusted tyre wear and temperature alongside penalty laps might have a bigger impact on professional racing. We asked MotoGP eSport pro Cristian 'Williams_Cristian' Montenegro Sanchez what he wishes for the most in the next instalment of the series and what might change for the professional scene once the new game has launched.

The most authentic and realistic MotoGP™ experience is coming.
Be ready to live the emotions of the official 2021 season, managing all the aspects of your race, like a real champion. MotoGP™21 will be out on April 22.#MotoGPvideogame #MotoGP #riders #racinggamers #racinggames pic.twitter.com/ZbICU2NNcW

Where Milestone left off

To get a better idea about what to expect from the upcoming MotoGP 21, we first need to look back on what its predecessors had to offer. From a professional's point of view, MotoGP 20 as well as MotoGP 19 both had their peculiarities, Cristian explains. In the leap from 2019's edition to the 2020 one, the pro player noticed a significant change in brake timing. While MotoGP 20 allowed riders to brake rather late and accelerate all the more quickly, MotoGP 19 worked quite differently in that regard. Cristian has a clear preference for this year's edition as well:

Being honest, this game was really difficult for me and for my riding style, because I had to brake so late and accelerate so aggressively. I’m used to riding with a good corner speed, but for this game, I had to choose a Honda over my preferred Suzuki. [For the new game, I would] like a similar style like at the beginning of MotoGP 19, before it had its update.

Cristian criticises that the 2020 game gave drivers clear boundaries, boxing them into a sole technique that worked in the game. Because of that, he's not able to show the riding style he's most comfortable with. This was something that further decreases the degree of realism in the game. Being able to brake late and accelerate quickly favours a certain riding style. Some riders benefit from that more so than others, who have to adapt to these in-game physics and are naturally at a disadvantage. According to Cristian, this wouldn't be the case in real life, where "you can be really fast with different riding styles".

More realistic driving physics would therefore solve this problem and bring MotoGP 21 closer to realism – making it a better simulation per definition. Milestone's announcements for the new game suggest that this is exactly what the developer aims for. Especially the prospect of introducing more accurate brake temperatures for players to manage by themselves might be a game changer. However, opinions might differ in regards to realism in MotoGP 21, which is why we also asked our community on Twitter about how important increased realism in the new game would be for their experience. This is what the masses have decided on:

How important is realism in the upcoming @MotoGPeSport title #MotoGP21 for you? 🤔🏍

What will change for professional MotoGP?

Some more time will pass until the new MotoGP game can be implemented in the official esports series. Despite that, we were obviously curious about what might change in the professional world when the new game is introduced. Considering new animations for fallen riders that have to retrieve their bike as well as an introduced Long Lap Penalty, there might already be some aspects that could make MotoGP competitions a lot stricter and more challenging. Cristian offered another factor that might shake things up a little:

I think [the game] will give us the chance to choose different tyres depending on the track, conditions, et cetera. This year you must use hard rear tyres, so I think this will change, become more interesting and also funnier, because we will have to choose the right tyres.

In addition to this point, Milestone already announced an updated tyre wear system as well as new fuel management in MotoGP 21. As two more factors that add to the game's realistic approach, they definitely increase the challenge pro racers will deal with. In the light of this, we are most likely in for what Cristian fittingly describes as "interesting and also funnier" competitions. 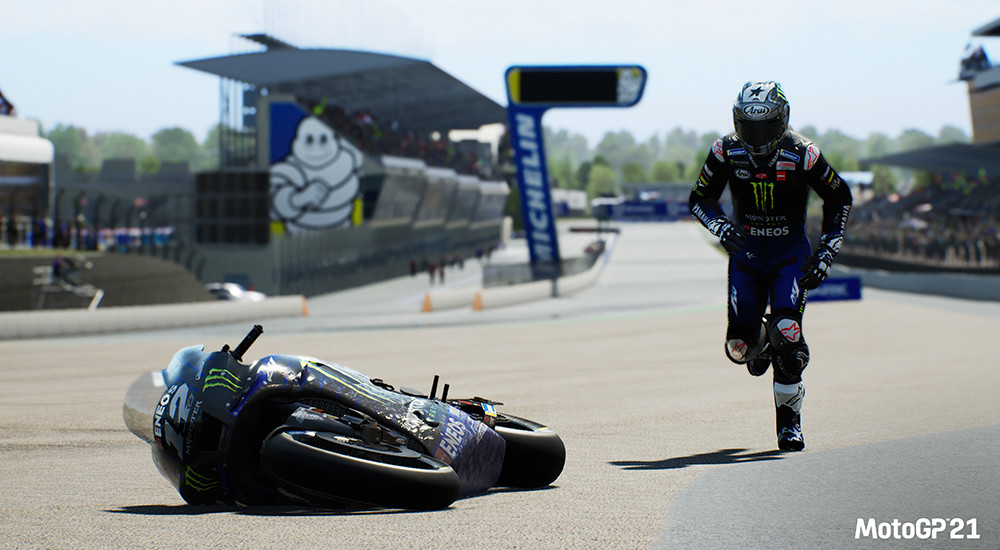 Bike retrieval animations instead of a simple respawns make it more difficult for riders to continue where they left off. Photo credit: Milestone

Outlook on the coming season

Cristian – certainly like many others in the MotoGP eSport scene – looks forward the most to the more realistic approach of Milestone in this season's game. More challenging physics that, at the same time, enable multiple riding styles are the core of what the pro hopes for in MotoGP 21. Apart from the upcoming game, this year's professional esports season also means a little bit of a relief, thanks to new motivation for the esports racer:

I hope to have fun driving this year, since I have suffered a bit in that aspect last year. I will also try to entertain the spectators, have great races and give a show – and then, as always, the goal is to try and win the championship or at least have a chance to win until the last race. I want to achieve a great result for myself and the team I will represent.

With that, Cristian perfectly summarises everything we wish for the new MotoGP game to offer once it is released and applied in the professional esport.

What do you absolutely want to see implemented in MotoGP 21? Tell us on Twitter at @OverTake_gg or in the comments down below!
Did you like this article? Please click thumb up or thumb down.


Submit
Tell us more
Tags: interview, esports
By clicking on one of those buttons you are leaving OverTake.gg