The ORL and FuturEsports Nations Cup is a whole new type of competition for F1 2020. Here are all the details you need to know.
Photo credit: Jacob Hancox / Codemasters

Outside the F1 Esports Pro Series and Challenger series, there has generally been very little esports-level competition on the Formula 1 games by Codemasters. The upper echelons of league racing have often included some of the very best drivers, but these leagues have been without prize pools or unique tournament structures. However, the Nations Cup by Online Racing League and FuturEsports is looking to change the competitive scene surrounding the F1 game series.

What is the Nations Cup?

The new tournament brings nationality-based teams from around the world into competition, pitting them against each other in a series of races. Each team can be made up of four drivers, with only two drivers per team taking part in each race. Points scored go directly to the teams’ standings, with no driver’s title being up for grabs.

Six rounds of racing will see the field compete in eighteen races, three per event. Each Sunday from 2 May until 6 June will feature an evening of Nations Cup action. The first two events will feature a format with three twenty-five per-cent distance races and two short qualifying sessions to decide the grids for the first and third races of each day. The second race’s starting order will be ascertained by reversing the order of top fifteen finishers in the first race. 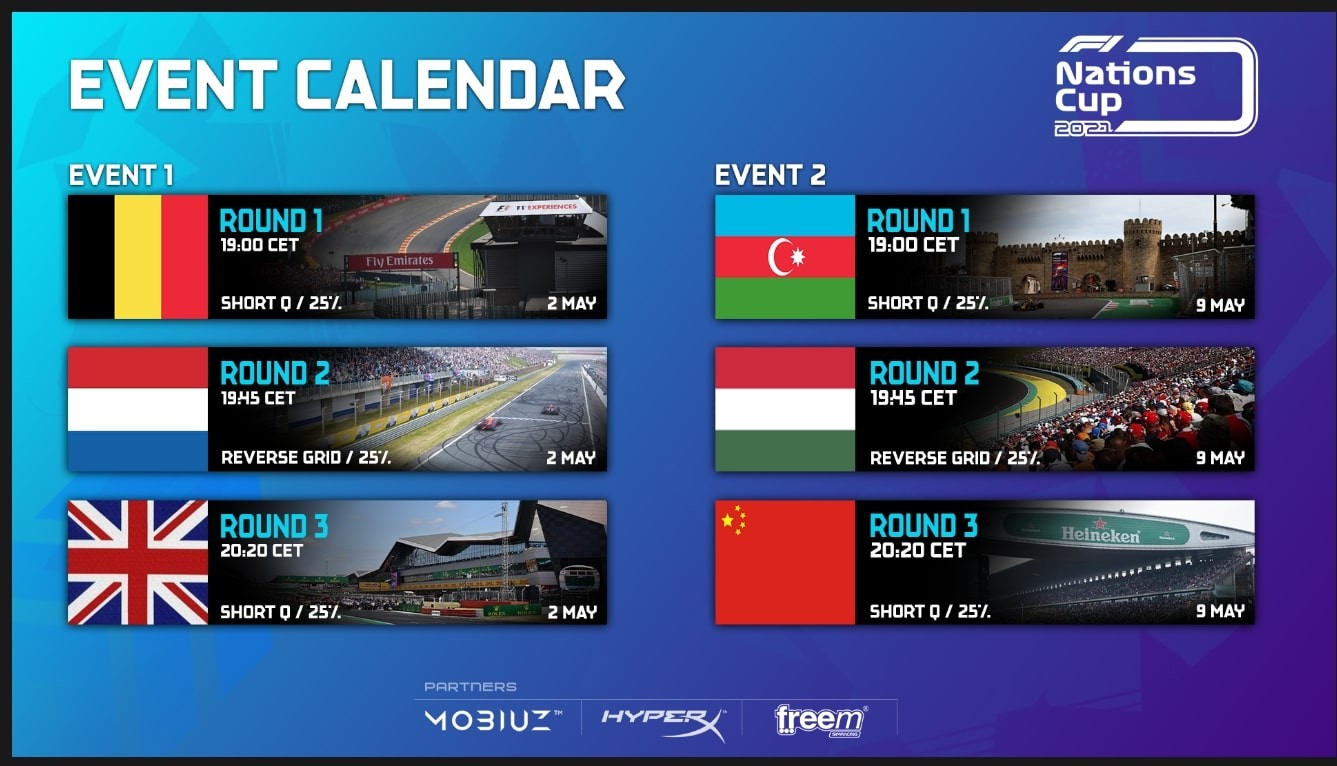 At the end of the competition, the top three nations will win a share of the prize pool. The winning team will receive their choice of either high-quality monitors or €2,000, as well as other sim racing peripherals such as gloves. According to Heikki Knuutila, owner of Online Racing League and organiser of the event, these prize pools may potentially grow over the course of the season.

Regarding the event as a whole, Knuutila said, “It’s certainly going to be interesting because there is no drivers' championship and it’s all about teamwork as we’ll only count points for each nation. It’s one of the first times that something like this has been organised on a game from the Codemasters’ series. Something new for everyone.”

Who is Taking Part?

Several automatically qualified teams have been revealed thus far, including squads representing Hungary, France, Italy, the Netherlands, Spain, Poland. The French outfit features both Renault Vitality F1 Esports drivers Nicolas Longuet and Fabrizio Donoso Delgado, and could well be a prime contender. Another team likely to challenge the top is the Netherlands, who have F1 Esports Pro Series champion Jarno Opmeer in their ranks.

Team Spain are also in with a shout, as F1 Esports drivers Alvaro Carreton of Williams and new Mercedes signing Dani Moreno will be leading the charge. The wealth of talent doesn’t stop there, with F1 Esports Pro and Challengers drivers past and present in each and every competing team.

Outside the auto-qualified teams are the three teams who fought their way into the Nations Cup through the two qualifying events. Team Europe, effectively a Spanish B-team, and Team Finland both claimed advancement from the first qualifying event. The second last-chance qualifier saw the Turkish team winning by a comfortable margin to progress into the Nations Cup itself.

Who do you have your eyes on for the Nations Cup? Tell us on Twitter at @OverTake_gg or in the comments down below!
Did you like this article? Please click thumb up or thumb down.


Submit
Tell us more
Tags: esports, competitive, f1 2020
By clicking on one of those buttons you are leaving OverTake.gg