How NFT trading is taking over racing games

At the end of May 2021, the “70th Anniversary Apex F1 car” was sold for $370,854. Where in the world will the car be standing in the future, you will ask? The answer is: nowhere. The vehicle was sold as a unique digital good, an NFT, on a browser game. It marked a new record for being the most expensive selling of a digital good in a racing game.

Big news 📰! A new record has been broken for the highest paid @f1deltatime car which is the 70th Anniversary Apex being resold for 3M $REVV ($370,854 USD at time of writing) making it most expensive now to date! 🤩🥳😮#animoca #blockchain #NFT #dapp #crypto #cryptonews #gaming pic.twitter.com/nrjYzdYZ1J

NFTs are taking over digital trade by storm. Suddenly, everything on the internet seems to be on sale. Things like the Nyan Cat gif, the first tweet ever posted or the entire work of Canadian musician Grimes are being sold for hundreds of thousands of dollars.

The trend is just arriving in racing. Formula 1 already has an official trading game based on NFTs. And MotoGP and Formula E are soon to follow. But there is also one major issue with NFT games that is a violent contrast to the promise of racing becoming environmentally sustainable.

How do NFTs work?

Before we discuss how NFTs are entering the world of racing games, let’s quickly recap what they are. NFT stands for 'non-fungible token'. A non-fungible asset in the real world is something that is unique, like the original of a painting. In the digital world, non-fungibility works a bit differently. Let’s take the example of Nyan Cat. The cute gif has been around the internet for years and has been viewed and shared millions of times. How do you own the original of something like this?

This is where the tokens come into play. Instead of selling the ‘original data’, an NFT is a certificate given out by the creator of digital art to confirm you are the rightful owner of the original. This certificate is stored on the blockchain to secure its truthfulness. NFT buyers can collect their tokens like trading cards to build an impressive collection or try to re-sell them to gain revenue.

Most NFTs also include a fee so content creators earn a share of the selling price each time the NFT is traded. However, NFTs are not linked to copyright, which means the owner of the Nyan Cat NFT, for example, cannot stop others from sharing it.

If you want to dive deeper into the topic, we recommend watching this short video by the Wall Street Journal:

NFTs are revolutionising the market for digital art. And the world of racing wants to claim its share as well. In February 2021, the Aston Martin F1 team announced its sale of NFTs of videos of their new F1 cars in action.

They are the only F1 team to be active on the NFT market so far. However, Formula 1 itself has already launched its official browser game F1 Delta Time in 2019. The game is centred around collecting and trading virtual items like drivers, cars, or components. Each of them is unique and some are rarer than others.

The goal of the game is to get the best car possible. A fast vehicle will win you races in the digital competitions within the game. But a big motivation to get a good car is to earn REVV, the in-game currency of F1 Delta Time.

One way how players earn REVV during certain time periods is by staking their cars. This means they transfer the ownership to F1 Delta Time and are unable to trade or use their cars in the game. The rarer the car, the more REVV revenue the stake is going to create. The other way to earn money is to sell your unique car. The NFTs of the vehicles can also be traded on popular platforms using the crypto currency Ethereum.

Blockchain entrepreneurs since then have showed more and more interest in the game. In December 2020, poker player Tony G invested $77,414 to buy the “Bahrain Edition 2020” car for his virtual racing team. And at the end of May 2021, F1 Delta Time broke another record with its $370,854 car sale.

Like so often in racing, Formula 1 is leading the way towards new technologies. But other racing series are soon to follow. Animoca Brands, the company behind F1 Delta Time, already announced they are working on official NFT games for Formula E and MotoGP. The business is booming. But there is a huge issue with NFTs that a contrast to one of the major guidelines of all those racing series.

The environmental impact of NFTs

Environmental sustainability has become an essential topic in racing. Formula 1 plans to be net zero carbon by 2030. MotoGP is also reworking their structures to “create a greener championship”, as the official website says. In September 2020, Formula E became the first sport to be certified net zero carbon since its inception.

But their entries into the world of NFTs are contrary to their environmental goals. We already mentioned that NFTs are being verified and traded using the currency Ethereum on the blockchain. To keep the security of the transactions, the blockchain uses a security system called proof-of-work. To add a new “block” of verified transactions, computers around the world, called “miners”, try to solve a complex puzzle. The first miner to solve the puzzle is rewarded with a share of tokens or some Ethereum.

However, this system is incredible energy inefficient. Every computer except for the one solving the puzzle basically uses their energy for nothing. At the end of May 2021, Ethereum mining had an annualised power consumption of electrical energy comparable to Iraq, according to estimates from Digiconomist. The currency also had an annualised carbon footprint of 23.18 megatons of Co2, which is comparable to the Dominican Republic. 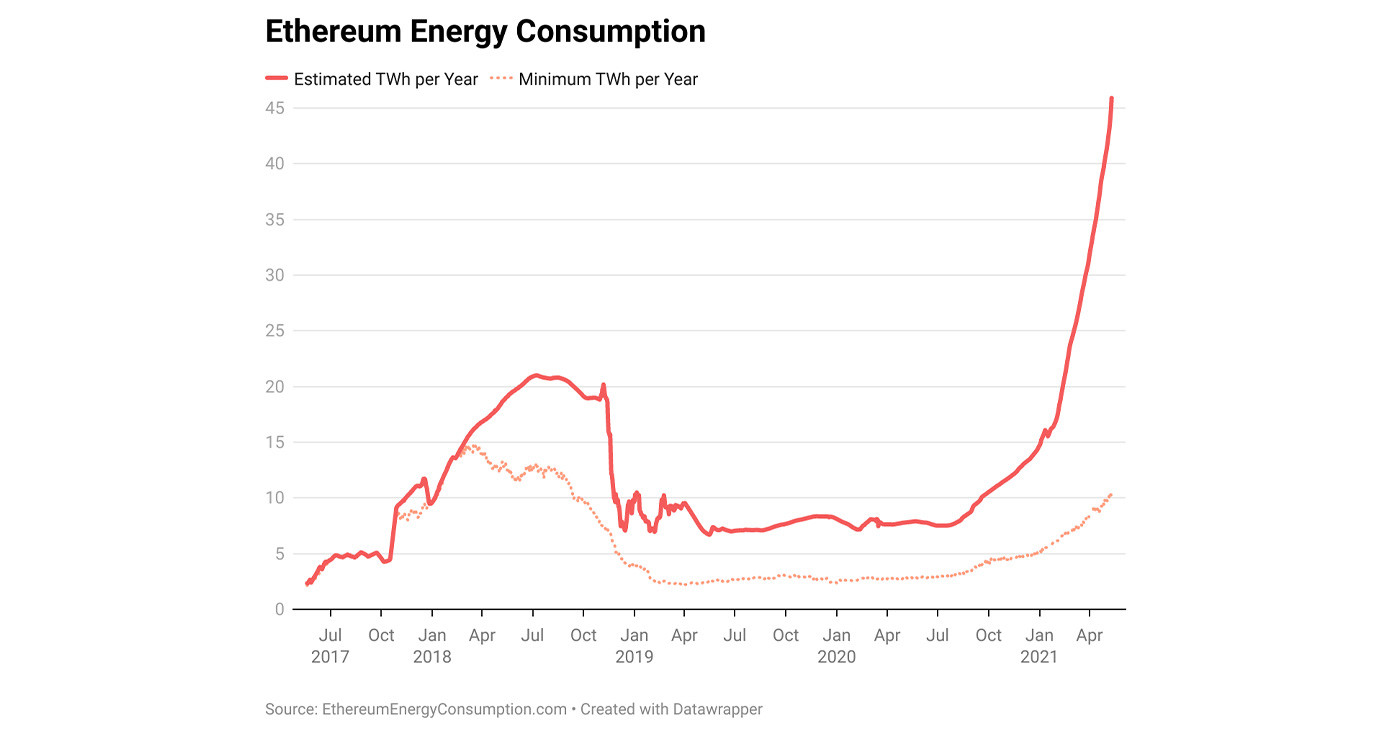 Let’s calculate it down to the user level. A single transaction with Ethereum currently has a carbon footprint of 48.09kg. That is about as much as driving 260 kilometres (160 miles) in your car.

NFT companies often claim they are not causing the emissions directly, but rather use a system that was operating anyway, with or without them. The other side argues that the booming NFT market is pushing the emissions of Ethereum even further. “Many NFT transactions send a stronger economic signal to the miners which may lead to increased emissions,” Susanne Köhler, a researcher on sustainable blockchain technologies, told The Verge. F1 Delta Time’s developer Animoca Brands left an interview request on the topic unanswered.

With their entry into NFTs, Formula 1, Formula E and MotoGP are creating a broader audience for the energy intensive NFT trading. Whether or not they are creating emissions depends on the point of view. However, the racing series through their web games can play a big part in creating sustainable change within the field of crypto currencies.

Leading the way to ecological change?

Ethereum is currently trying to change from the proof-of-work system to the proof-of-stake system, which would reduce the energy consumption of the currency by 99.95%, experts estimate.

However, the switch has been in the works for years and there is no final date for it to happen yet. There is also a very big problem for the currency. Ethereum needs to convince everyone taking part in the blockchain to change from the old to the new system. Otherwise, the system could split up into multiple chains, which would cost Ethereum its strength.

Formula 1, Formula E and MotoGP could lead the way by proactively encouraging users to change to the proof-of-stake system. NBA is already making an example on how to do it. Their NFT marketplace Top Shot already operates on a proof-of-stake blockchain called Flow.

NFTs are a big chance for motorsports to earn money and let their fans take part by owning unique content pieces. The online games are helping to establish NFTs for a broader audience by adding a form of gamification to the trade market.

However, NFTs are currently running on a system that is very unfriendly towards the environment. But with their name and influence, Formula 1, Formula E and MotoGP have the chance to raise awareness of the issue and lead the way into a new era of eco-friendly blockchain technology.

What is your opinion on NFT trading? Are you playing or planning to play an NFT game? Tell us your opinion by tweeting at @overtake_gg or leave a comment down below!
Did you like this article? Please click thumb up or thumb down.


Submit
Tell us more
Tags: formula 1, formula e, motogp, meta
By clicking on one of those buttons you are leaving OverTake.gg