News
Reading time: 3 minutes
A leaked screenshot of an Amazon page for a new Thrustmaster wheel, called the T-GT II, seems to reveal that the new model will include T-DCC and T-RTF.
Photo credit: Thrustmaster Amazon

First of all, the name of the potential new wheel appears to be the Thrustmaster T-GT II. This would make it a continuation of the T-GT model, which was born from a partnership with Gran Turismo. Most of the description alongside the Amazon listing seems to be the same or similar to the T-GT. It talks about a leather-wrapped with 25 action buttons, as well as a 40-watt high-speed brushless motor.

However, where it gets really interesting are the patented technologies that might be held within the T-GT II, should it exist. Listed among these are a few familiar aspects, such as the T-LIN which is designed to provide linearity in the force feedback, and also the T-DFB. Much more interesting are the listings which have never been seen before: the T-DCC and T-RTF. 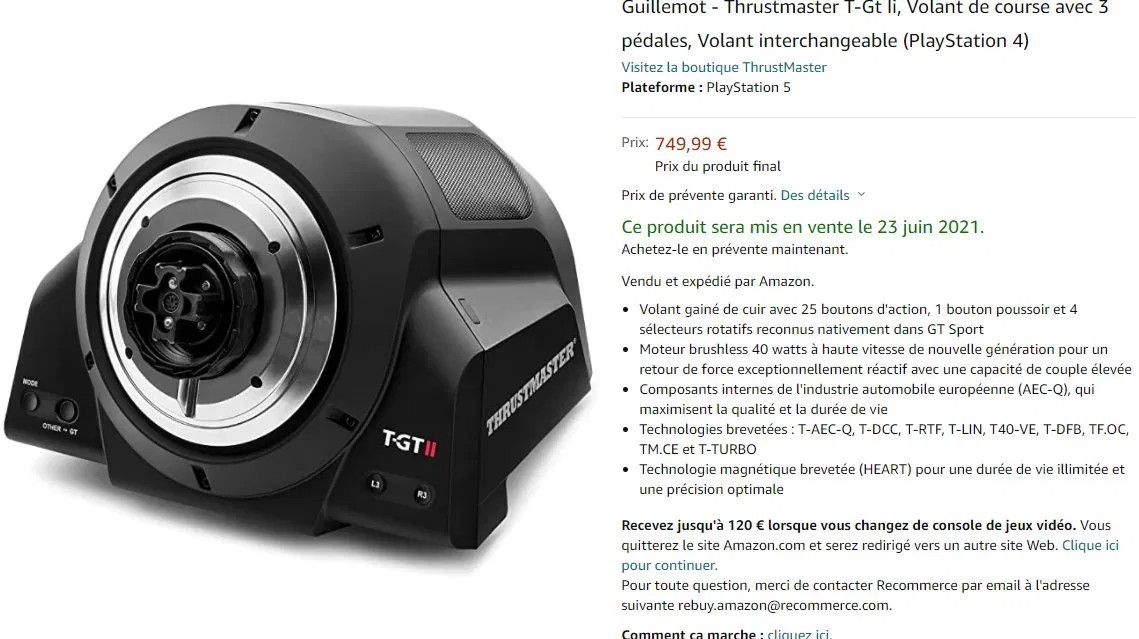 Both the T-DCC and T-RTF have been teased on the Thrustmaster twitter page. Speculation abounded about both, with fans wondering what they could be. It was initially thought that the T-DCC would refer to a whole new wheel, perhaps called the T-700.

However, if this image is genuine, then both the T-DCC and T-RTF are not full-fledged products in and of themselves, but rather technological innovations which will be a part of future Thrustmaster products. When one considers the hype around Fanatec’s recent push for affordable direct drive, it seems likely that one or both of these new technologies might relate to direct drive in some way.

Sadly, no more information on these technologies is available yet. What we can tell you, though, is that the image shows the new T-GT II costing €749.99. Even if the image is genuinely, some of the information may be false or incomplete.

What do you think about the leak? Tell us on Twitter at @OverTake_gg or in the comments down below!
Did you like this article? Please click thumb up or thumb down.


Submit
Tell us more
Tags: hardware
By clicking on one of those buttons you are leaving OverTake.gg