Alma Corse: Aiming to field a sim racer in F4

There have been many tournaments that result in a driver going from sim racing to the real thing, such as GT Academy and World's Fastest Gamer, providing opportunities for sim racers to compete in real motorsport. Well, here's another one, a team that aims to make an everlasting impact in racing: Alma Corse.

We got in touch with the person who heads up Alma Corse, named Alessio Romito. He aims to build a sim racing championship and award one competitor a chance in a real racecar. All you need to take part is a subscription to iRacing, the Dallara F317 car and a payment upfront directly to Alma Corse of about €49 that goes towards funding the race team, with the aim of competing in an FIA Formula 4 event as early as next year.

We sat down with Alessio to talk through Alma Corse’s mission and what they can guarantee for the winner.

OverTake: So Alessio, what is the mission of Alma Corse?

Alessio Romito:
We have a very simple mission. To democratise motorsport. Make it more accessible, creating opportunities for talented drivers as well as engineers and mechanics who have not had the chance of taking their first steps into motorsport. This could be for a variety of reasons, maybe for a driver it’s because of budget or for mechanics and engineers it’s because of lack of experience or opportunities due to coming from a different background whether it be income, gender or ethnicity.

With motorsport being a small world, you can understand how limited the opportunities are for all sorts of people, so our mission is to create opportunities for these people and ensure we can be agents of change in this sport with our small means and our small team and send a message that a small group of people can achieve something concrete then imagine what we can do with more awareness from the big players in the sport and industry.

Everyone must play their part to increase #DiversityandInclusion in #motorsport.

This is why Alma Corse is committed to providing ad-hoc opportunities to women and other under-represented categories in the sport. #womeninmotorsport #makeitreal pic.twitter.com/ahYHKUqo1i

OverTake: How did this begin?

Alessio Romito:
It started around a year ago. I was finding myself at the end of a Master’s degree in Business Administration which is focused on motorsport and the supercar manufacturing industry in Bologna. All my colleagues and I were looking for jobs in motorsport and we were all getting a similar experience.

The big teams are too inaccessible and usually don’t care unless you’re already in the company somehow. Smaller teams (F4, F3, F2) are too small and often family-run organisations, even the most successful ones. It does not create opportunities to allow people to get their foot in the door of motorsport.

So it started with the realisation of ‘if nobody wants me in motorsport then I will do it myself’. That’s how the idea of creating a racing team began and from that point onwards, the realisation that this was something that was achievable then the concept went through different iterations, working with different people and we ended up with this format.

OverTake: We are currently in the beginnings of your mission, what are the things you have learned this early on?

Alessio Romito:
Something we were very well aware of before was that money makes the world go round especially in motorsport and it’s incredibly tough to raise any amount of money, it doesn’t matter whether it’s a thousand euros or 100,000. It is incredibly difficult to get to race any sort of money when all you have is a decent idea and good people to work with.

What we learned is that it’s incredibly difficult to find committed individuals who want to be part of the journey. Finding the right team and relying on the right individuals, it has been something I underestimated in the beginning. Believing we can do it ourselves and putting the weight of the world on our shoulders, you start thinking of all the things you need to do to run a team, it quickly adds up and can become like a full-time job.

I learned this fairly early on when we attempted to start a team last year and it failed because I didn’t have enough people to rely on and work with. All the people who told me 'Yes I’ll be there!' and things didn’t turn out so well. So to find the people who actually show up and help was what ultimately helped us progress to the point we are at now. 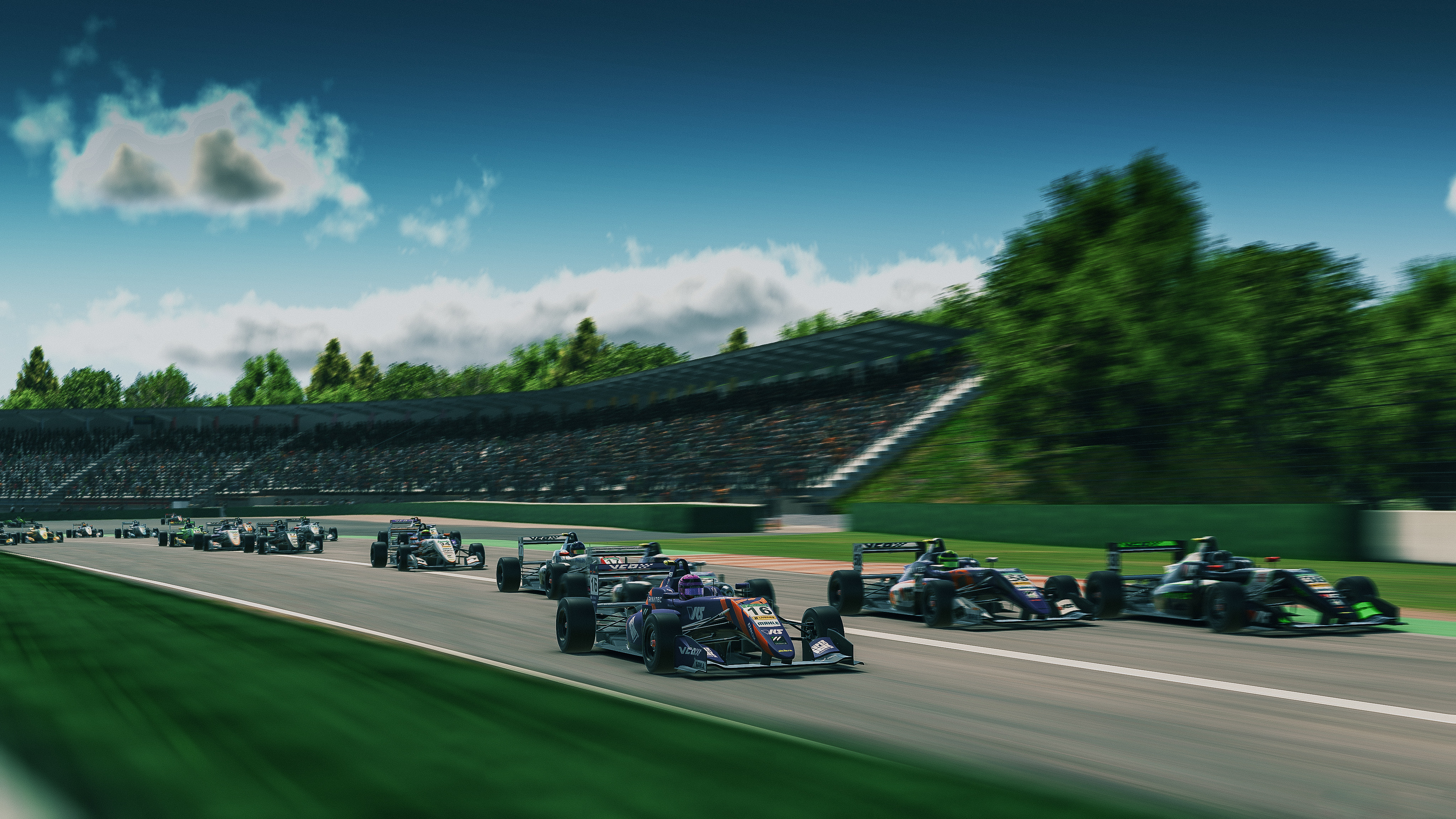 OverTake: From your market research, you decided to pick the Dallara F317 on iRacing to host your series. What made you settle on this car and sim over others?

Alessio Romito:
Different reasons, some from research and some from what we believed would make our life a little bit easier. Starting with iRacing, because that is something that we have been criticised for, we want to democratise motorsport yet for our planned sim racing series we use the most expensive commercial simulator that you require a subscription.

We chose iRacing because it had the biggest community and we need those numbers to be financially viable so naturally we need to drift towards paying customers (to fund the real racing) and we’ve seen a higher willingness to pay from iRacing customers because they’re naturally more inclined to spend money on their sim racing hobby. We need the money to get off the ground and we saw we can find that in the iRacing community with much more ease compared to other games. We still want to cover other games and communities in the future.

What also attracted us to iRacing is the ease of setting up tournaments and server time. For us, since we don’t have a big team and we mostly working in our free time on evenings and weekends, so if I can spend ten minutes to arrange a championship instead of an hour, it makes a big difference.

As for the Dallara F317, we wanted a single seater because we aim to race in Formula 4, we know there is an F4 equivalent car in iRacing but it’s not as popular as the Dallara F317 and the feedback we’ve seen is that the F3 car is great at testing the skills of the drivers. It teaches you how to drive with a lot of downforce, about warming up tyres and brakes and generally it’s a car a lot of iRacing players will have in their garage already.

OverTake: At what point in the process are you with setting up an F4 team and what can you guarantee for the person who wins the shootout as well as others who participate?

Alessio Romito:
To build an F4 team by our estimations, you need something around 500,000 euros to spend on acquiring the car, the facilities, to pay people who work for you a liveable wage. It is a level of funding to us that is at the moment just unattainable.

We decided to cut down this dream into smaller, more achievable pieces and this meant narrowing down the scope for our first year to a single race weekend entry, which is something we estimated as being in the ballpark of 20,000 – 50,000 euros which should be a little more realistic for us. It’s still a lot of money and we have exactly zero right now. That’s why we set this as a crowdfunding goal, we want to be completely transparent with everyone who pledges their money to compete with us.

We have taken steps in analysing what needs to be done, we’ve established contact with teams from many different FIA-certified F4 championships where we can purchase a car and let them operate it to lower our costs. We’ve also got our eye on other potential options such as Electric Race Academy, British Hillclimb, Italian TCR if we can't get the money to do F4.

We are legally a non-profit organisation, none of us get a salary so all the income goes into the team, and trust from our competitors in the sim racing competition is vital, we don’t want to do anything to jeopardise that trust.

The goal for year one is to have a sim racing tournament in which the top selected drivers then go to test the car and the winner will be decided and will be able to compete in a real-life motorsport series. We want to ensure that the drivers who get to have tracktime, that one of them will indeed get to race.

We also hope to provide incentive to other competitors who don’t get the chance in the real car with other prizes such as tutoring and hardware among other things. The way we're organising the crowdfunding is to have stretch goals to compete in more and more expensive series if we are able to secure the necessary funding. So that the more participants we have, the bigger the prize will be. We wanted to avoid that but it's impossible without outside money

OverTake: Finally, what’s the aim of Alma Corse beyond getting a sim racer into a real-race seat?

Alessio Romito:
As a team, we operate in the opposite way of other teams. Whilst other teams in the lower categories take on pay drivers which fund the team’s operations and the salaries of the members, our aim is to create a different model where we don’t have to hire pay drivers and we instead fund the team through other means. To ensure this is a viable business model.

We also aim to provide an eye-in on the world of motorsport, and give people an opportunity to play a role with influencing the team if you become an associate or a competitor. It is a fantastic opportunity to garner an understanding as to how a team operates through the content we have planned through livestreams and videos during the race weekends. Finally, we’d like to increase the diversity within the members of the team, and also giving those of different backgrounds a shot in the test as well in which the winner will earn the race seat.

Our hope is that this model can become a sustainable and financially viable means of running a team.

Romito aims to use the summer period to build up the Alma Corse competitor list with the real season beginning in September, with the intention of having six events in twelve weeks. Thankfully, you won’t have to splash any cash on the tracks as all the circuits that you will compete on will be free, including the ever-popular Laguna Seca Raceway in California, the incredible Oulton Park circuit in Britain and also Okayama in Japan.

To find out more, join Alma Corse’s official Discord and maybe you will end up competing in an F4 car.

Will you be taking part in Alma Corse's tournament? Tell us on Twitter at @OverTake_gg or in the comments down below!
Did you like this article? Please click thumb up or thumb down.


Submit
Tell us more
Tags: interview, competitive, iracing
By clicking on one of those buttons you are leaving OverTake.gg