After a highly successful first rendition, the Le Mans 24 Virtual is rumoured to make a comeback as part of an official ACO-sanctioned championship.
Image credit: @24hoursoflemans on Twitter

On the weekend of June 14 last year, the peak of all the virtual racing action took place with the landmark Le Mans 24 Virtual event. Whilst that race was held on rFactor 2, one year earlier there was another ACO-sanctioned virtual racing event that took place on Forza Motorsport 7, the Le Mans Esports Series Super Final.

Whilst the Le Mans 24 Virtual was the one 24 hour race like the real thing, the Le Mans Esports Super Final took the round-the-clock format and flipped it on its head. They had nine races in a 24 hour period with a variety of different cars and tracks, which was a remarkable test of mental strength. The Le Mans Esports Series Super Final was the amalgamation of a fully structured championship made up of qualifying events.

It went on to have a second season but it was heavily compromised by the pandemic, and the structure of the Super Final had to change to compensate for the fact that unlike the year before, the drivers weren't all in one location. Since Forza doesn't have a driver-swap feature, the event took place over four days with three races per day.

With the partnership being formed between ACO, Studio 397 and Motorsport Games, rumours have emerged that a third season could be in the making.

Le Mans 24 Virtual to be jewel in the crown of new virtual series?

The ACO and the World Endurance Championship look set to be going ahead with the Le Mans Virtual Series. The cooperation, which has yet to be officially announced, would be a full-on championship and could include the second rendition of the Le Mans 24 Virtual.

An info image was leaked on Discord which allegedly listed details about the team registration. Supposedly, teams will be asked to pay an entry-fee of €2,500 for the full season. The teams that are selected to participate will be considered based upon their previous performance and committment to the Le Mans Esports Series. There will also be a reserve list should the series be overly-subscribed. This, too, is still to be validated by an official source.

The structure of the LMVS could be reminiscent of traditional endurance racing series, with the single endurance race per round and teams running either an LMP2 or GTE car, unlike the LMES with multiple races per event and loads of different cars.

If this series is set to go ahead, expect an announcement in the leadup to this year's 24 hours of Le Mans on the weekend of 21-22 August. 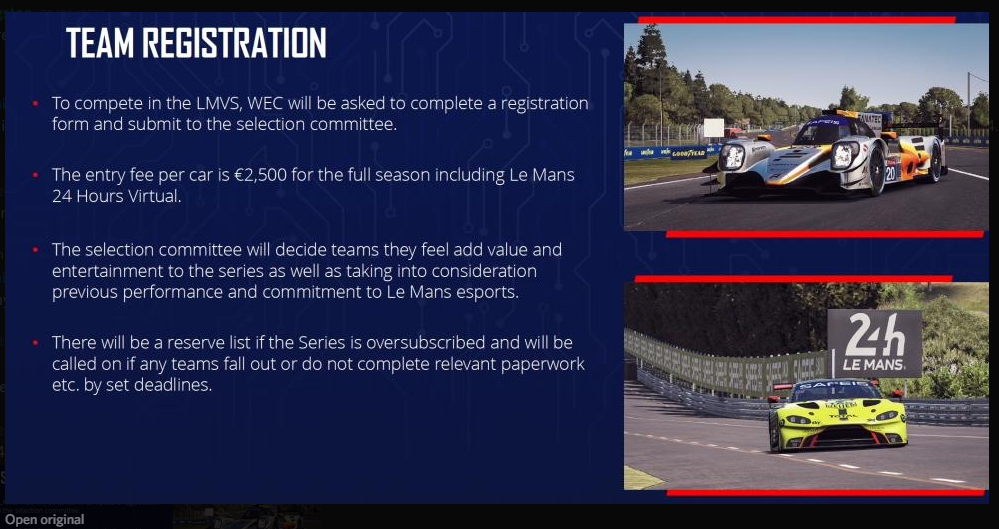 What do you think of the Le Mans Virtual Series? Tell us on Twitter at @OverTake_gg or in the comments below!
Did you like this article? Please click thumb up or thumb down.


Submit
Tell us more
Tags: le mans, esports, rumour
By clicking on one of those buttons you are leaving OverTake.gg