My Team mode in F1 2021 gives you a lot of choices. Which teammate to choose, how to develop the car, which title sponsor to go with? All these questions and more are answered in this guide.
Photo credit: Codemasters / EA

While Braking Point may be the hottest new game mode for F1 2021, My Team is still the best long-term experience the game has to offer. As soon as you start up a new My Team save, you’re bombarded with choices you’ll have to make. So, whether you’re totally new to My Team or you just feel you’ve never been able to get the most out of it, here is our guide on getting started in F1 2021's My Team career mode.

Well, cash is mostly king in My Team. It helps you to sign better teammates and to improve your team’s various departments. At the start of the game it’s also important that you have enough money to sign with a good engine supplier. The main way to get money is through sponsors, and you’ll get the most through your title sponsor which you will have to select at the beginning of every season. 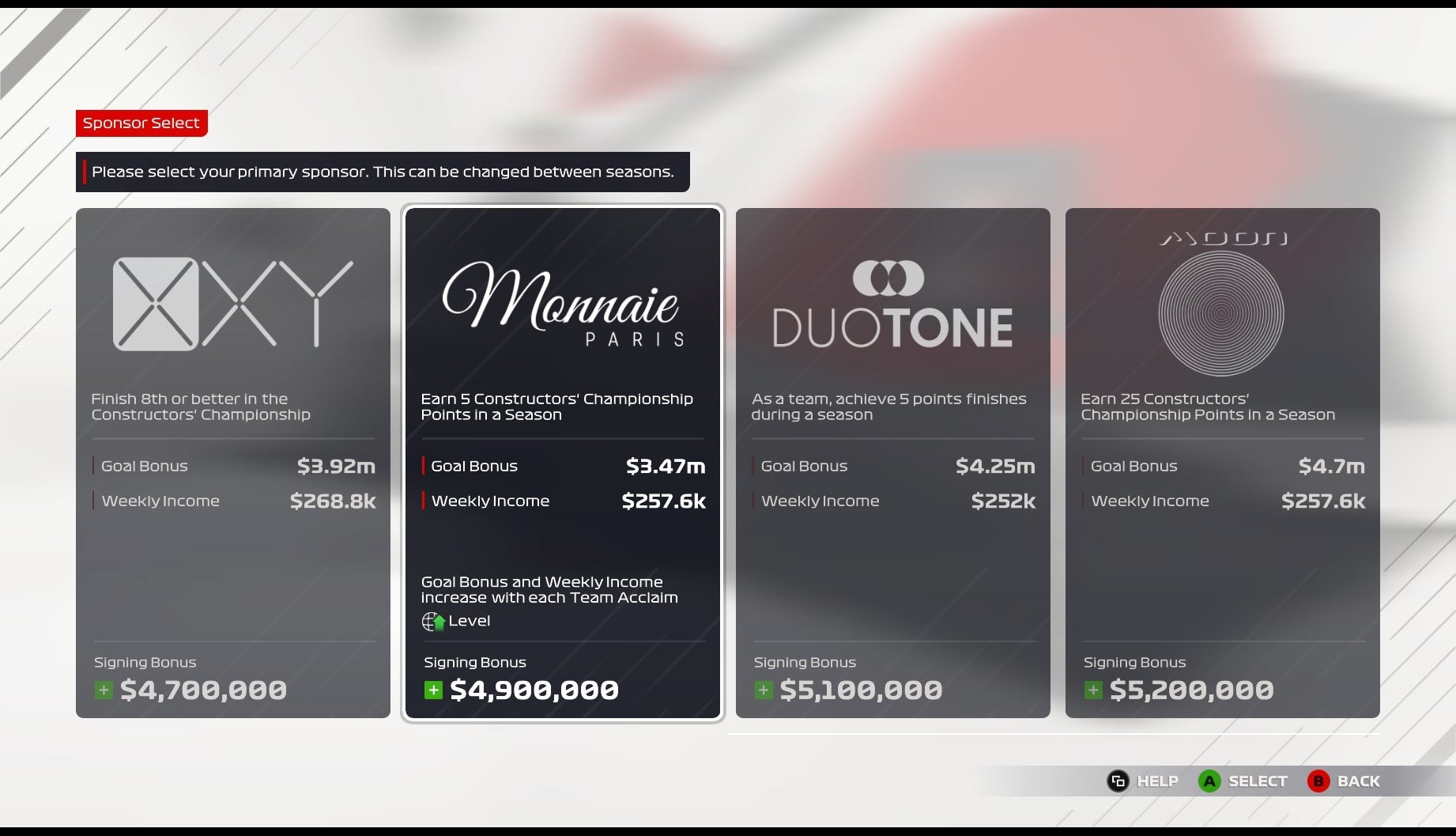 Monnaie Paris is a solid sponsor to start with. Photo credit: Codemasters / EA

When it comes to selecting your first title sponsor, remember to watch out for the signing bonus. A large signing bonus will mean that you can sign both the best engine supplier and teammate available, giving you a nice leg-up at the start of your first season. Each sponsor has a goal it wants your team to meet, and if you do meet it, the sponsor will pay you another lump sum in addition to the weekly payments it will also make. Monnaie Paris is a solid option with an attainable goal, decent weekly income and a big signing bonus, but there are several good options here.

Next up is your engine supplier. If you’ve taken a title sponsor with a good-sized signing bonus, then you can feel free to select whichever of the four engines you would like. Mercedes is a good option, as it provides the best overall performance and is cheaper than the Ferrari option, while also only being slightly more expensive than Honda. 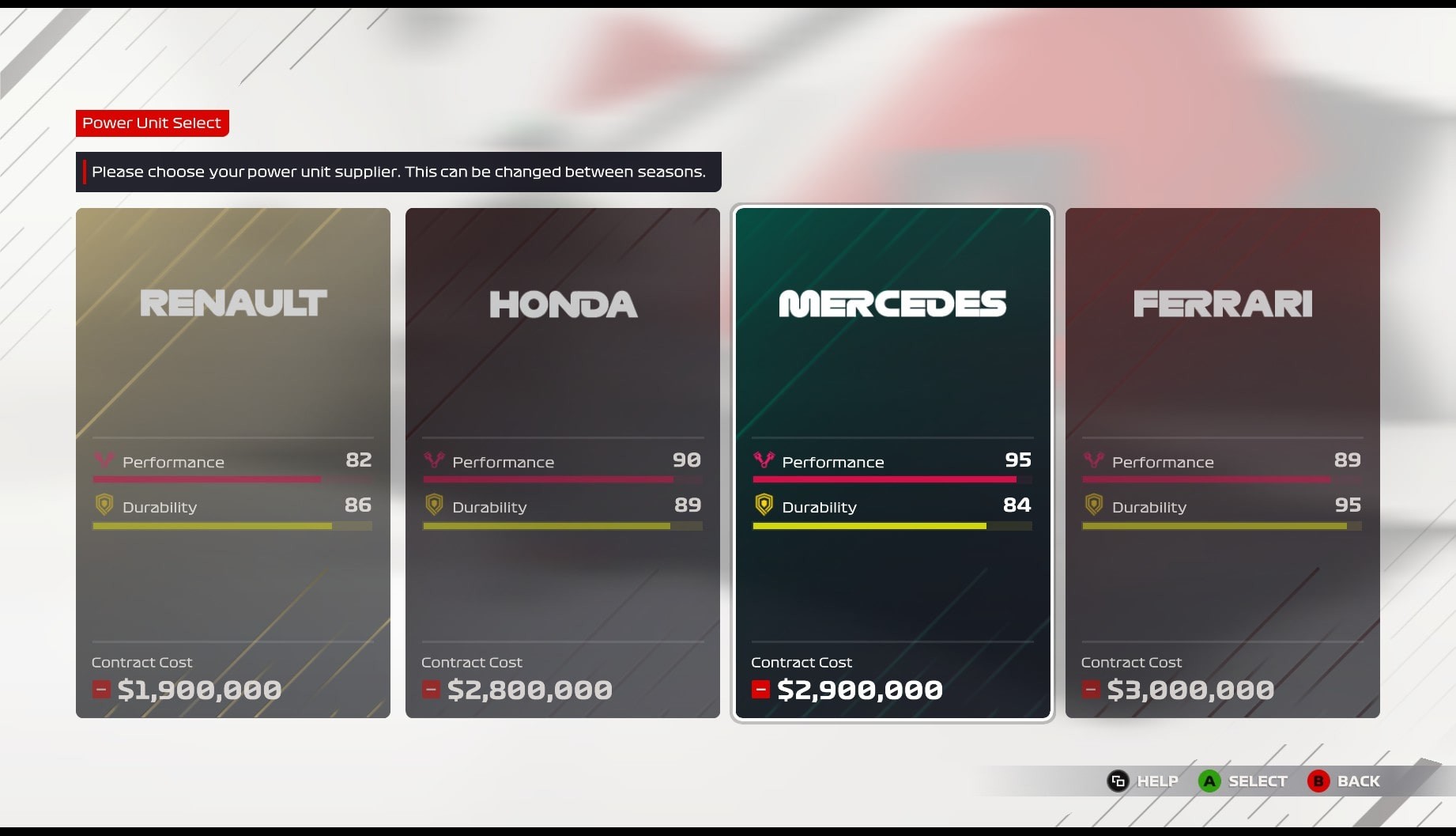 What Mercedes lacks in reliability it makes up for in POWER! Photo credit: Codemasters / EA

The lowered reliability of the Mercedes engine shouldn’t be too much of an issue, as you should be able to manage it throughout the season and taking grid penalties here and there isn’t a big deal.

When it comes to picking your teammate, you should easily have enough money left over from your sponsor’s signing bonus to choose whoever you would like. Experience is the stat you want to focus on here, as it’s very unlikely that your teammate will be fighting for points any time soon. At least with a high experience rating, they will be helping your resource point generation rather than simply being dead weight. Keep an eye on the driver’s focus rating as well, as this determines the extent to which they are performing to their potential. 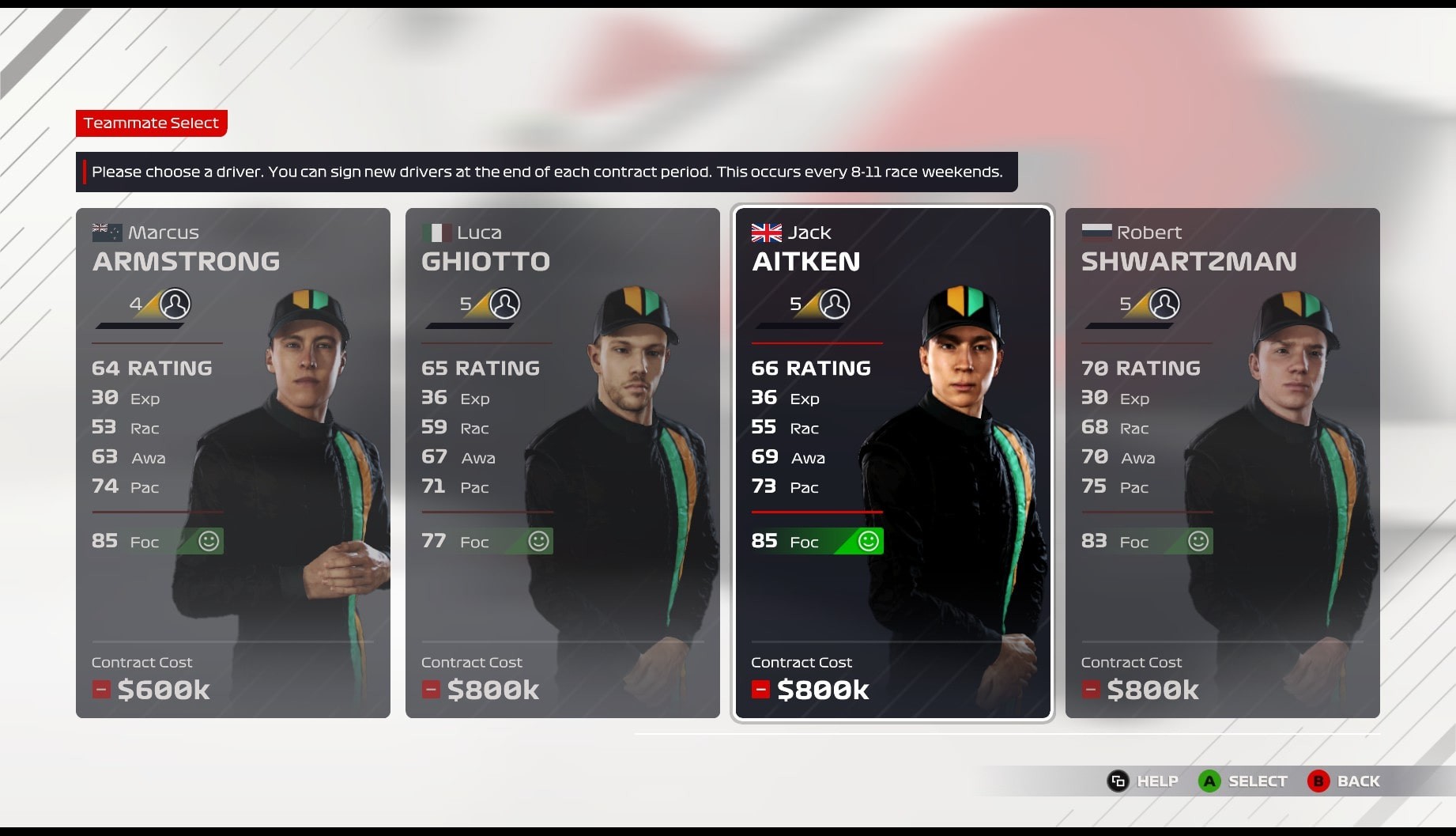 You won’t always be given the same eight options, so sometimes he won’t be an option, but Jack Aitken is an excellent choice here. Jack comes with an experience rating of 36, good by the standards of the other drivers on offer. This experience doesn’t come at a cost to his pace either, as Aitken possesses a pace rating of 73, which is enough to mean that he won’t be an embarrassment compared to the rest of the field. Whoever you select, going for the driver training camp activity at the very start of the game is always a good idea!

Acclaim: your ac-claim to fame

Your acclaim total is a valuable thing. It determines how much money you can get from sponsors, as well as the number of sponsors you can have signed at any given time. As such, it’s important to improve your acclaim as much as possible early on so that you can get the financial ball rolling. Interview answers and departmental activities can help you to boost your acclaim, as well as good performances on track of course!

Finally, the last thing you should know before you get started is where you want to be allocating your resource points to get the most out of your car in the races to come. The My Team car by default has two great flaws - it is heavy, and it is draggy. Therefore, the most important areas to develop are your chassis’ weight reduction and your drag reduction in the aerodynamics section. 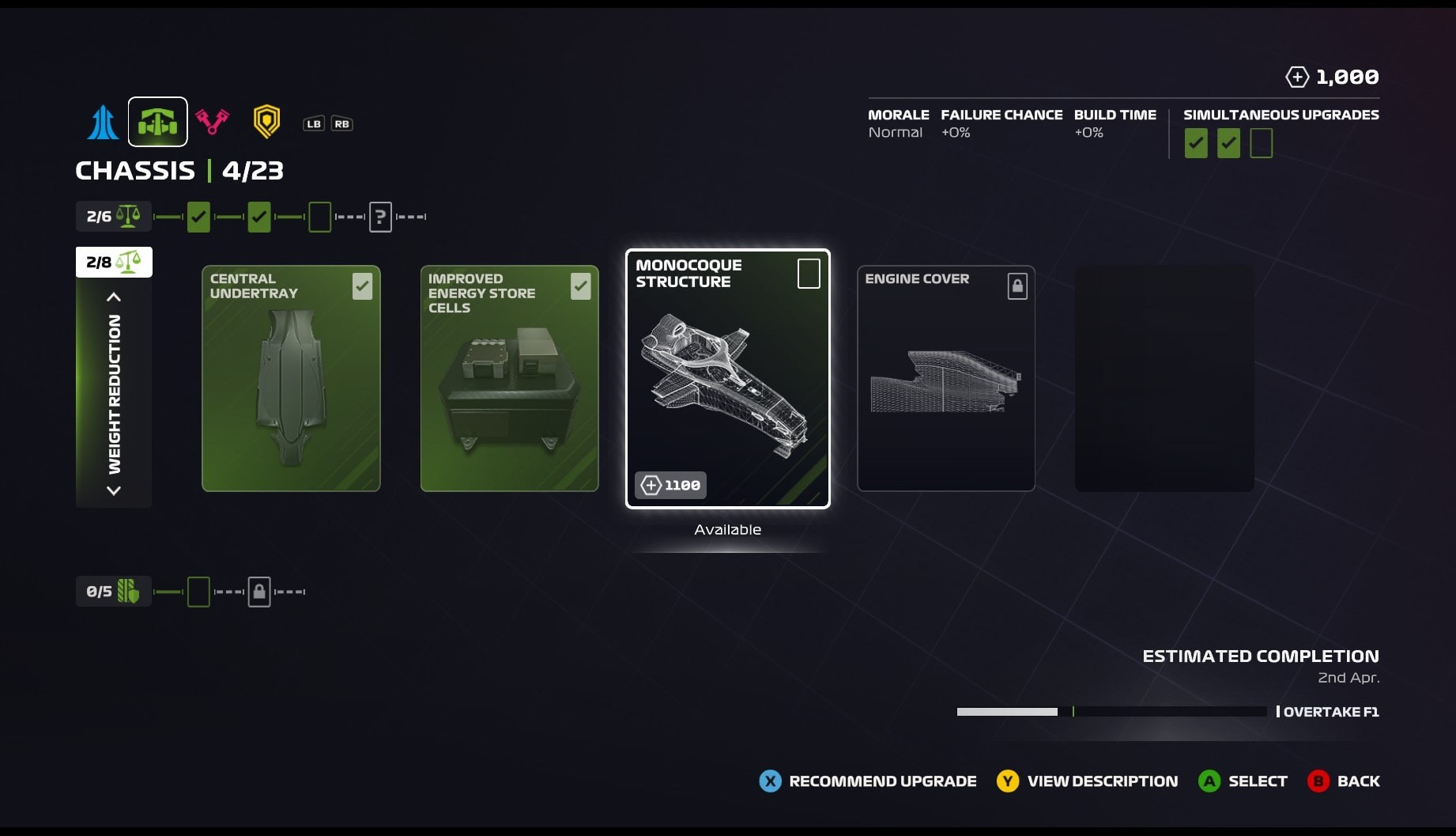 You can get a head-start on these by correctly answering the questions that Will Buxton asks you in the first interview. If you tell Will that you have been focusing on developing a light car, you will get a couple of weight reducing upgrades right off the bat! Putting some early focus on the chassis and aero departments with the departmental activities will also help you here.

Did you find this guide helpful? Tell us on Twitter at @OverTake_gg or in the comments below!
Did you like this article? Please click thumb up or thumb down.


Submit
Tell us more
Tags: tutorial, formula 1, codemasters
By clicking on one of those buttons you are leaving OverTake.gg