When F1 game developers Codemasters announced they were developing what was being referred to as an F1 kart full-on arcade game, some people laughed and scoffed at the concept. But even today, F1 Race Stars has made an undeniable impact in the F1 gaming world, and players still go back to it from time to time.

There are still some people who have never heard of this game, and that's a crying shame. So what was it that made this game so special, why do F1 game players still find themselves going back to it, and should Codemasters consider making a new version?

What made F1 Race Stars unique?

In F1 Race Stars, the teams and drivers featured are from the 2012 season. So you had current drivers like Lewis Hamilton, Fernando Alonso, Kimi Räikkönen, Sebastian Vettel, Daniel Ricciardo and Sergio Pérez all racing for their 2012 teams McLaren, Ferrari, Lotus, Red Bull, Toro Rosso and Sauber respectively. You even had Michael Schumacher in his farewell season for Mercedes.

Along with the twelve teams with their two drivers, you could also select two fictional teams. These were TecNova-Star, with fictional drivers Ruby Power and Jessica Chekker, and Satsu-Aceler, with two other fictional drivers, Josh Merit and Kira Hoshihara.

You can race 15 tracks (four added later as DLC) based rather loosely on the tracks from the 2012 season. However the mere locations are where the similarities end as if you race on Abu Dhabi, you can enter Ferrari World and ride the famous Formula Rossa roller coaster's track. Or if you drove the British Grand Prix track, it will go through a load of aircraft hangars since Silverstone was built on an airfield. 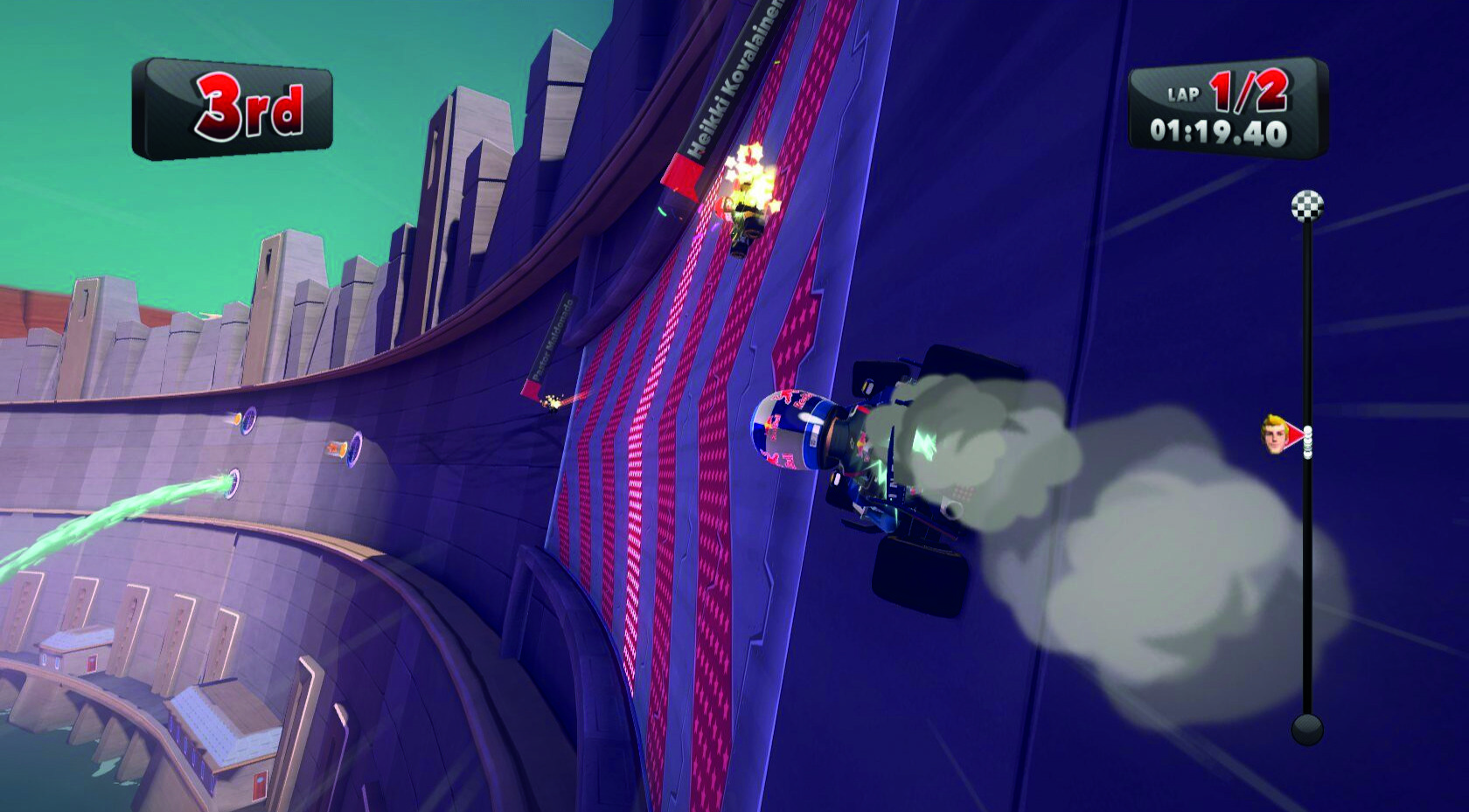 Players tackle the whacky surroundings of the majority of the 2012 season's host countries. Photo credit: Codemasters

Each of the tracks has some blue arrow covered roads which acts as a KERS charging system on their corners which give players a boost after reaching the end of the pieces of track. The speed of the boost is increased if players tap the brake and accelerate buttons on their game controllers several times while staying on the arrows.

There are also Item Boxes, where players are able to use weapons to get ahead. If their car gets hit by a weapon, it will get damaged, meaning that the players will have to go to one of three separate pits to maintain top speed.

Power-ups that you can get include wet weather where everyone slows down apart from whoever enables it, there's a safety car feature to slow up the drivers who are right at the front, and also the ability to make your car all silver which makes it impervious to damage. Overall it is a very relaxed and fun take on the ever serious world of F1. But it wasn't without its downsides.

The big problem of the game

The issue with F1 Race Stars was that it was trying to blend very opposite ends of the racing spectrum in an attempt to appeal to both sides. On the one hand, you had the people who are F1 fans who would prefer the more realistically-based handling models as appose to full on arcade games.

On the other hand, there were those who didn't have the slightest clue how to be quick in those sort of games motorsport fans lean more towards, and preferred the chaos of something like a Mario Kart game. These players didn't care for realism. 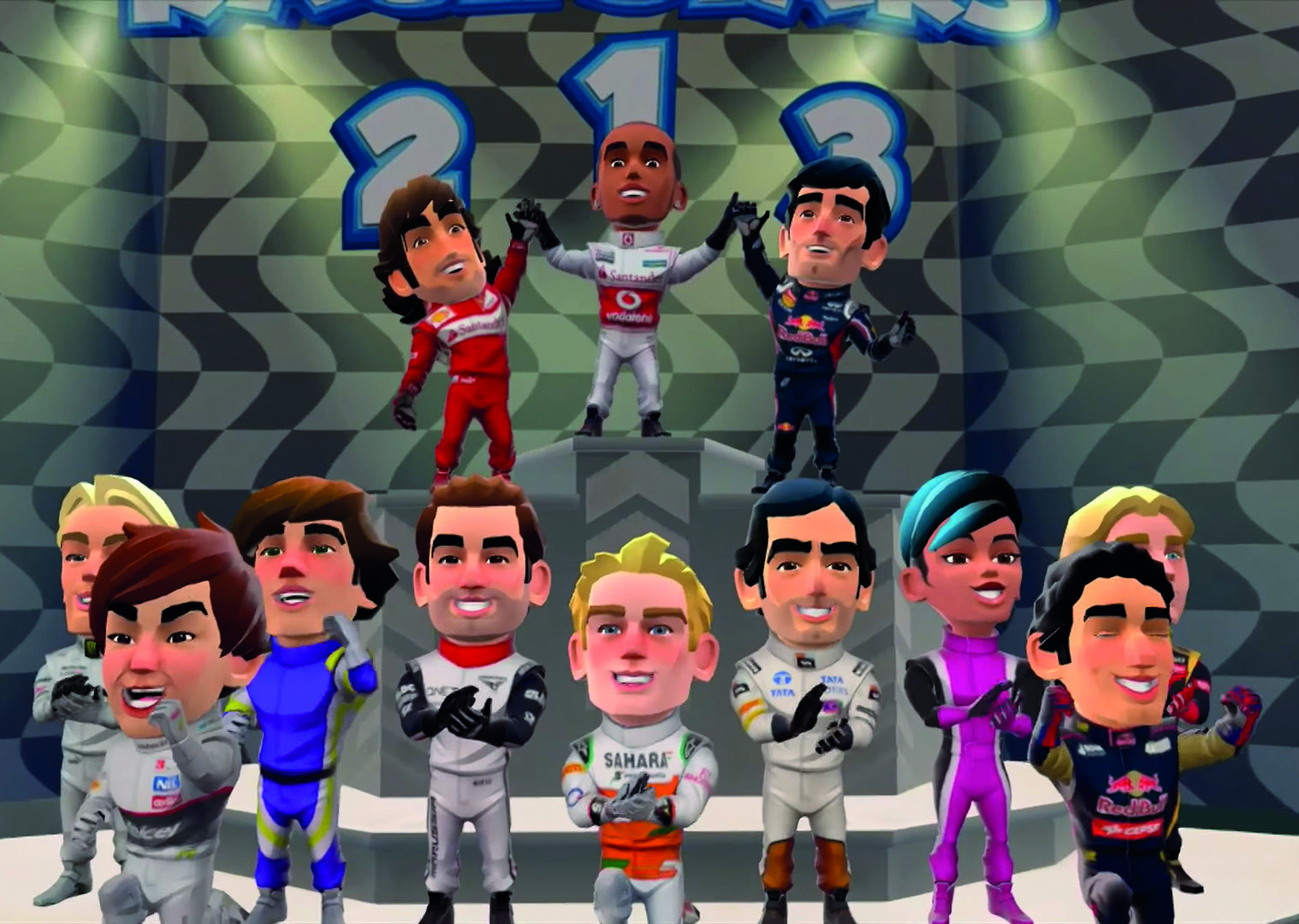 The design of all the drivers is pretty spot. Photo credit: Codemasters

This attempt to ride the thin line between both sides is most apparent when it comes to taking corners in the game. The developers didn't want to go down the same route as a majority of kart games where you drift around a corner to go faster because as we all know, drifting isn't faster in real motorsport.

Should they make a new one?

Yes, they absolutely should have another crack at it. Especially in this day and age where F1 has entered a new digital age with personalities who are directly involved in the gaming and streaming scene like Lando Norris and Charles Leclerc among others. However they should make improvements.

The design of the characters, environments and all the power-ups don't need to be changed. However, the controls could use a makeover to cater to the needs of arcade fans who are not used to hitting the apex correctly: instead of the understeer-heavy handling model or drifting, the same button that's usually used to drift in a Mario Kart for instance, could be employed to help the car turn further into a corner. That would make it so much better.

Maybe F1 Race Stars will not be an annual release like the core-game series but at the very least it would be great to have at least one game per every generation of gaming console. So right now, we could have a follow-up for PlayStation 5, Xbox Series X/S and Nintendo Switch.

It won't sell so well to warrant a yearly release since the F1 and motorsport fans will have the F1 games among other various motorsport titles, and the kart arcade community will have a plethora of other games like Mario Kart and Crash Team Racing to satisfy them. But you can't deny the appeal that F1 Race Stars has and let's hope that Codemasters can see the everlasting impact this game had on the F1 gaming community and be compelled to make a sequel.

If you haven't played F1 Race Stars, you should. You can play it on Xbox 360, PlayStation 3, PC, Nintendo Wii U and on your Apple devices.

What would you like in a new F1 Race Stars game? Tell us on Twitter at @OverTake_gg or in the comments down below!
Did you like this article? Please click thumb up or thumb down.


Submit
Tell us more
Tags: review, formula 1, mario kart, opinion
By clicking on one of those buttons you are leaving OverTake.gg