The Hungaroring is a tricky circuit to master. Using this guide will help you on your way to doing so.
Photo credit: Codemasters / EA

With the real-world Hungarian Grand Prix weekend now underway, you may want to try the circuit out in F1 2021. Known as Monaco without the walls, the Hungaroring is a tough, technical circuit with plenty of long corners to contend with. In order to have a smooth and fun experience, you’ll need a setup for the track. Thankfully, that’s exactly what you’ll find below! Do note that the emphasis for this setup is on drivability and handling rather than outright pace, so you’ll find that this setup works better in a race than in time trials.

The bread and butter of any setup in F1 2021 are the wings. These are the most impactful settings in the game, so it’s crucial that you get them right. Running 9-9 wings should give you enough downforce to take the many types of corner in Hungary without too much understeer without piling on the drag. This latter aspect is important because it is very difficult to overtake at Hungary, so running lower drag than the competition can give you an edge. If you find yourself understeering, try adding a bit more wing angle. 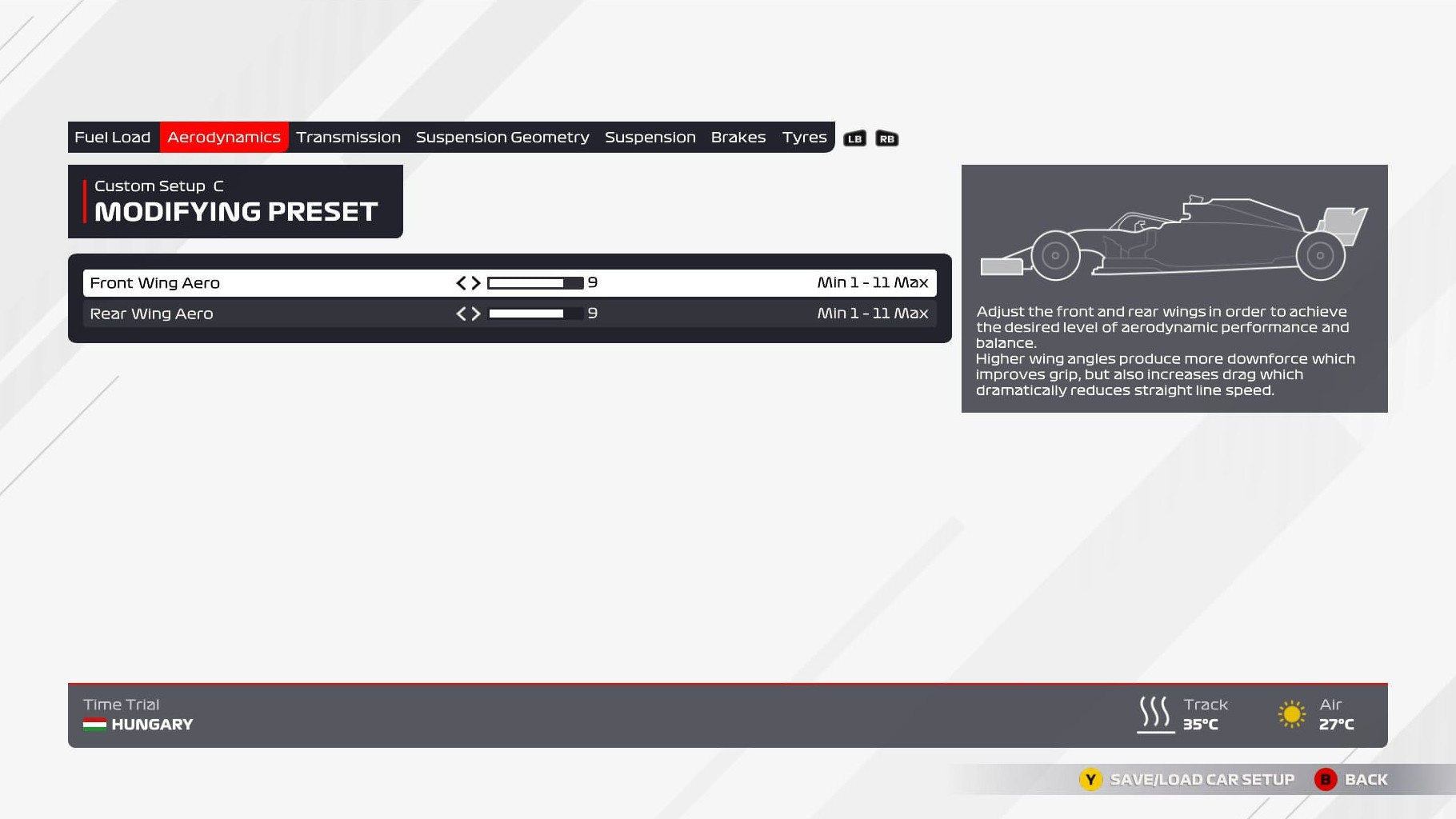 As for the transmission, you’ll want to run an on-throttle setting of 65% with an off-throttle setting of 50%. The on-throttle differential setting should give you good traction out of the slower corners without leaving you with a squirrely rear-end. As for the off-throttle, running the minimum percentage gives you a car with good manoeuvrability as well as helping to limit tyre wear. 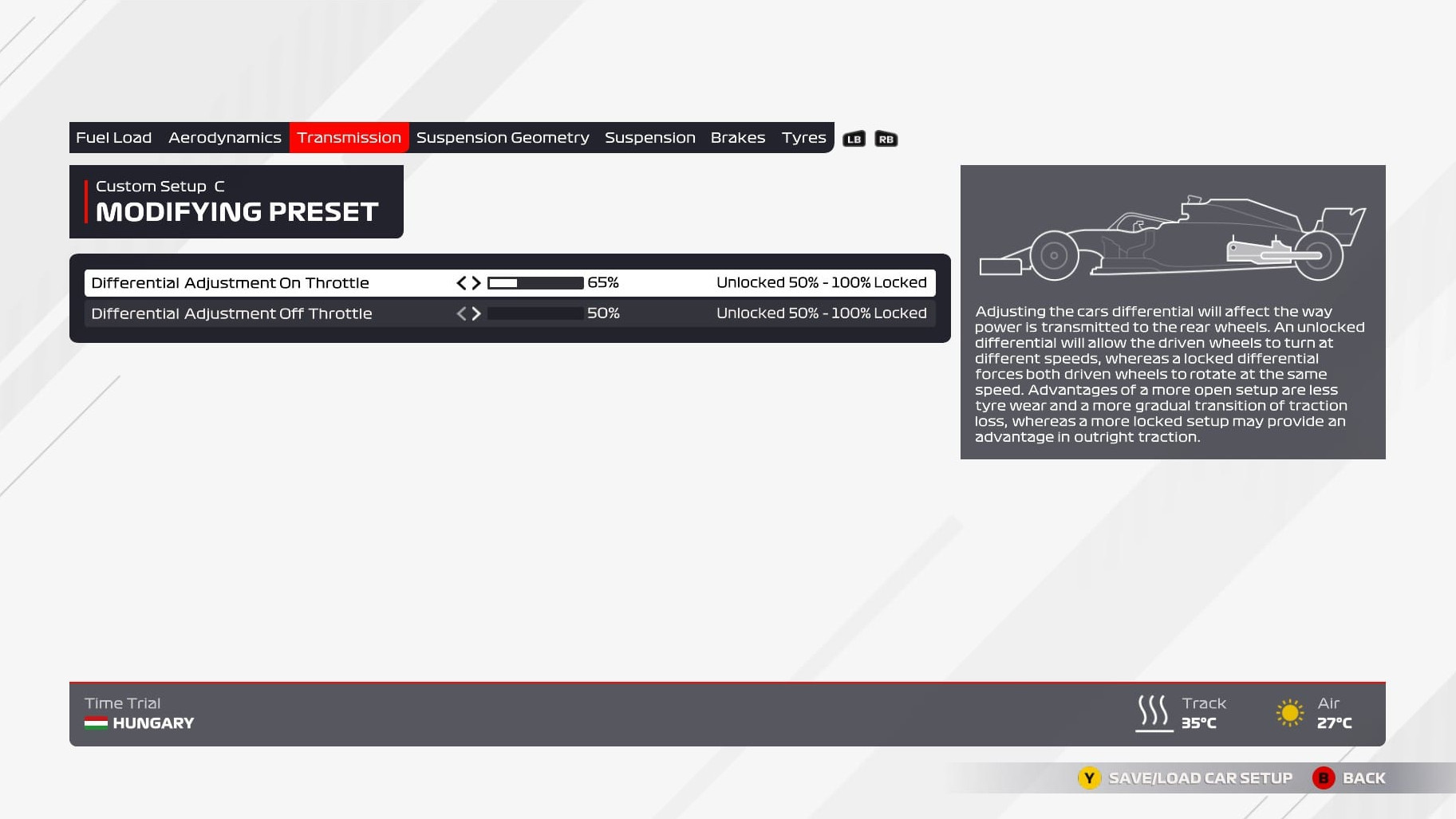 When it comes to the suspension geometry aspect of the setup, there is a trade-off to be made between outright performance and tyre management. The front tyres take more of a beating than the rears in Hungary, and as such it’s a good idea to run the lowest front camber angle possible, -2.50. While running higher levels of front camber would help in the long corners, the effect it would have on the tyres would not be worth it in a race situation. As for the rear camber, -1.60 strikes a good balance. 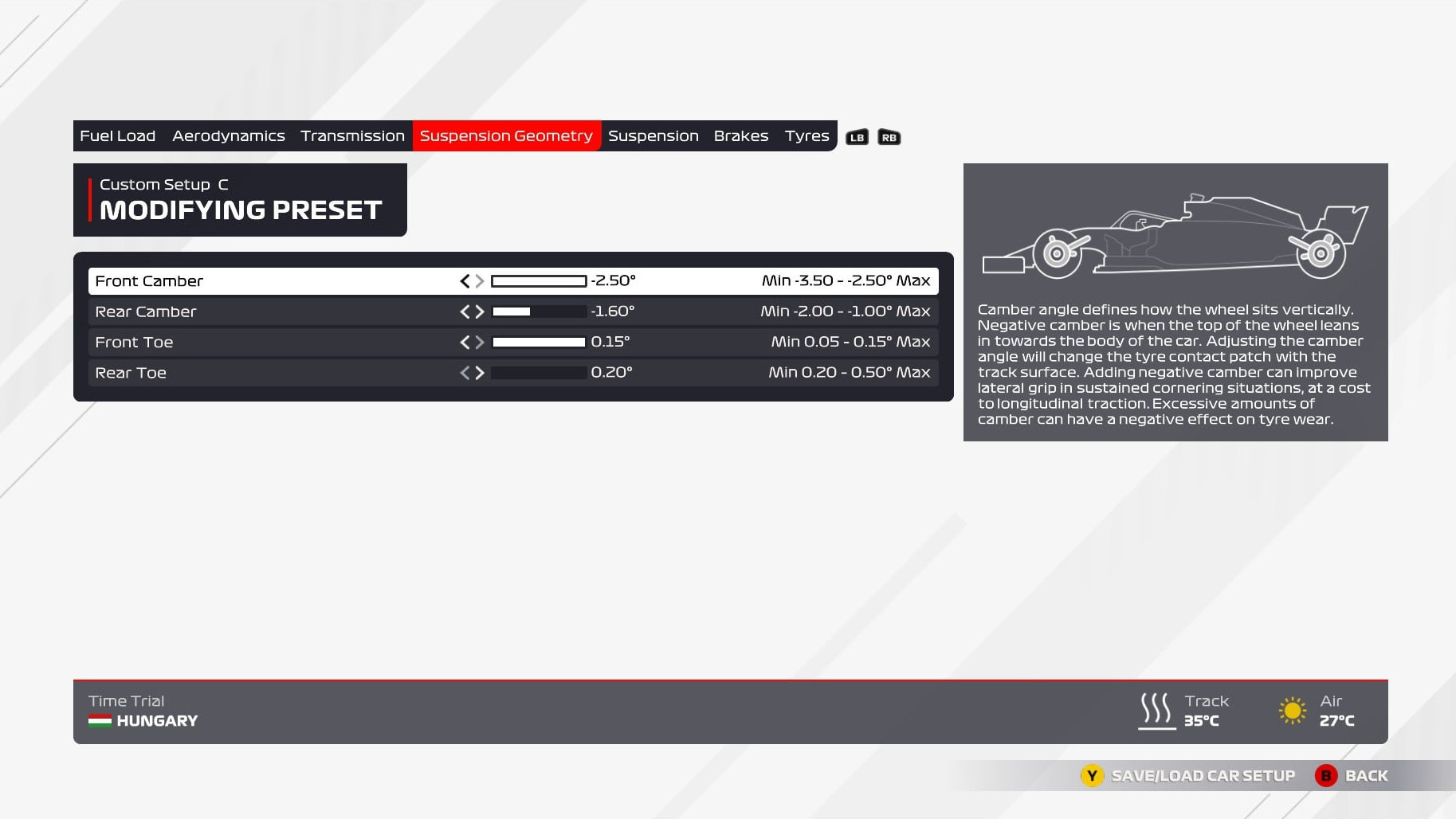 Toe angles are somewhat less impactful, but still important. At the Hungaroring, it is a good idea to run the maximum front toe angle of 0.15. This gives you a nice, responsive front end. Running high levels of front toe tends to risk stability, but this doesn’t become a significant issue in Hungary with this setup. For the rear toe, going in the opposite direction and running the minimum angle of 0.20 is the way to go.

As with the suspension geometry, the stiffness of the suspension itself is something which requires compromise. Running 7-1 on the front and rear specifically is a good balance. The front setting is high enough that the car is sharp and responsive, but not so high that it over-stresses the tyres. Going with a soft rear suspension makes the car feel a lot more stable and a lot easier to drive, without costing too much in terms of lap time. 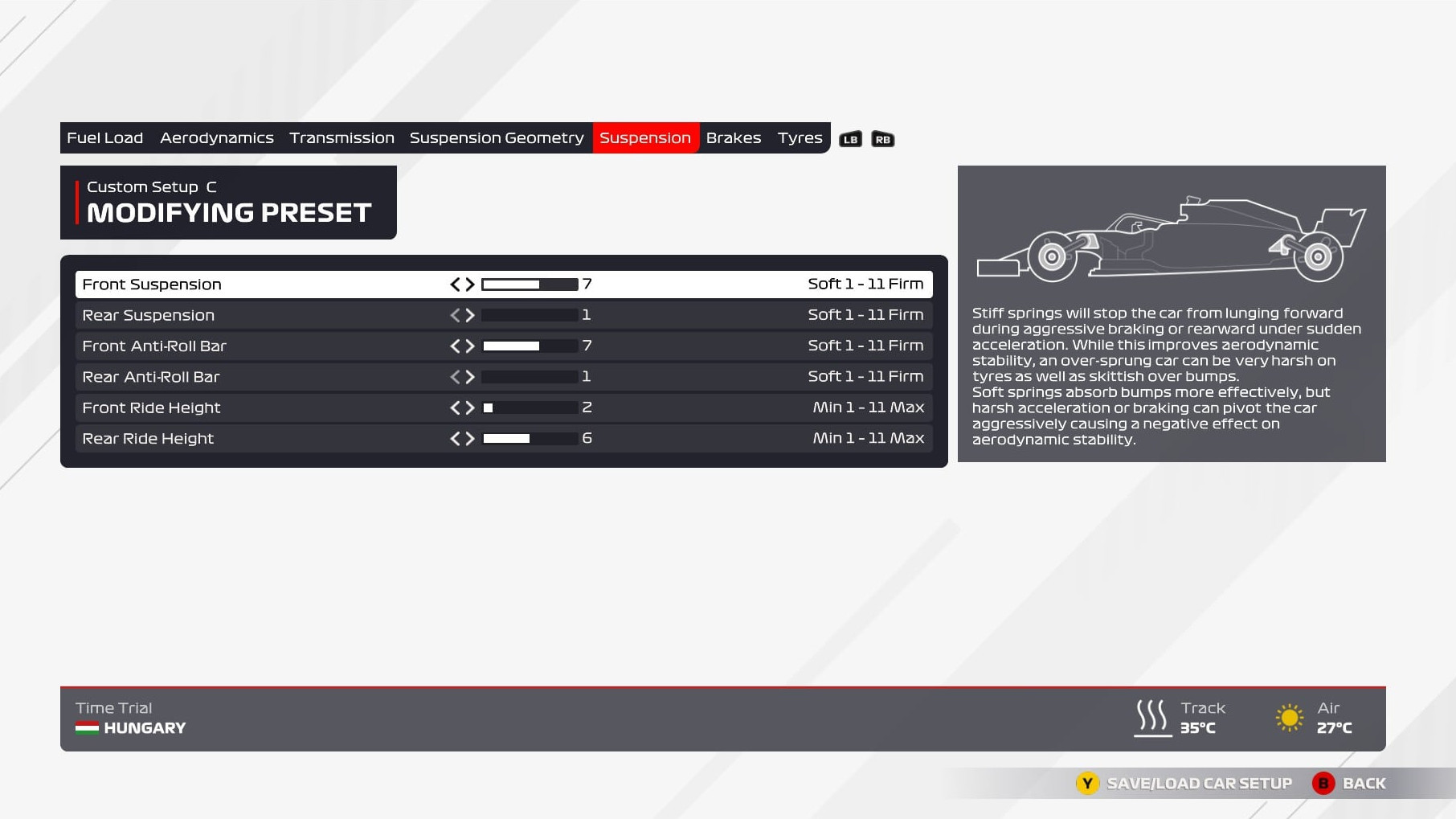 The anti-roll bars should also be run at 7-1. The somewhat stiff front setting prevents the car from washing out wide in the second half of some of the longer corners, but any higher than 7 will likely cause tyre overheating and excessive wear. The rear setting, as with the suspension stiffness itself, is designed to provide comfort and stability.

In general, it is a good idea to run as low ride-heights as you can get away with. Too low, and you’ll find kerbs and bumps on the track surface will unsettle the car and make your life difficult. At the Hungaroring, 2-6 gives you enough clearance without ruining your aerodynamic performance.

Next up are your brake settings. At most tracks, running the maximum brake pressure is usually the way to go, but in Hungary knocking a few percent off down to 97% makes the difficult braking zones far more manageable without losing too much of your stopping power. As for the brake bias, 56% is low enough to prevent too much front locking, but any lower and you’ll struggle to keep the rear end under control in the braking zone for turn 6 in particular. 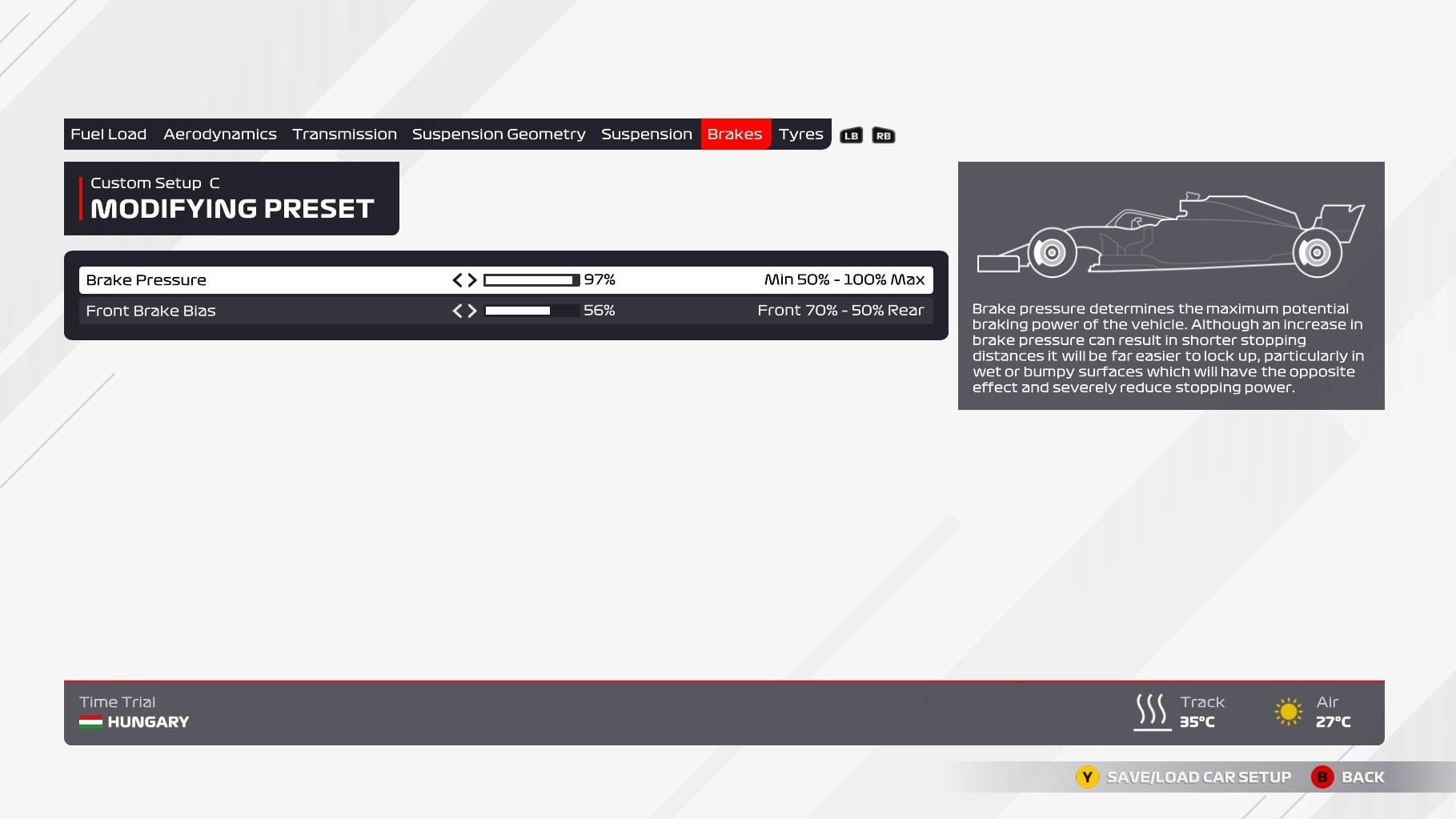 Finally, there are the tyres. For your front tyres, it’s a good idea to split your pressures. As the front left tyre is the one which takes the most punishment at this circuit, running the minimum 21.0psi is necessary to keep tyre temperatures in check. The front right is less critical, as so you can afford to pump it up to 22.2psi. For the rear tyres, 22.3psi gives you good, reliable traction without causing temperature difficulties. 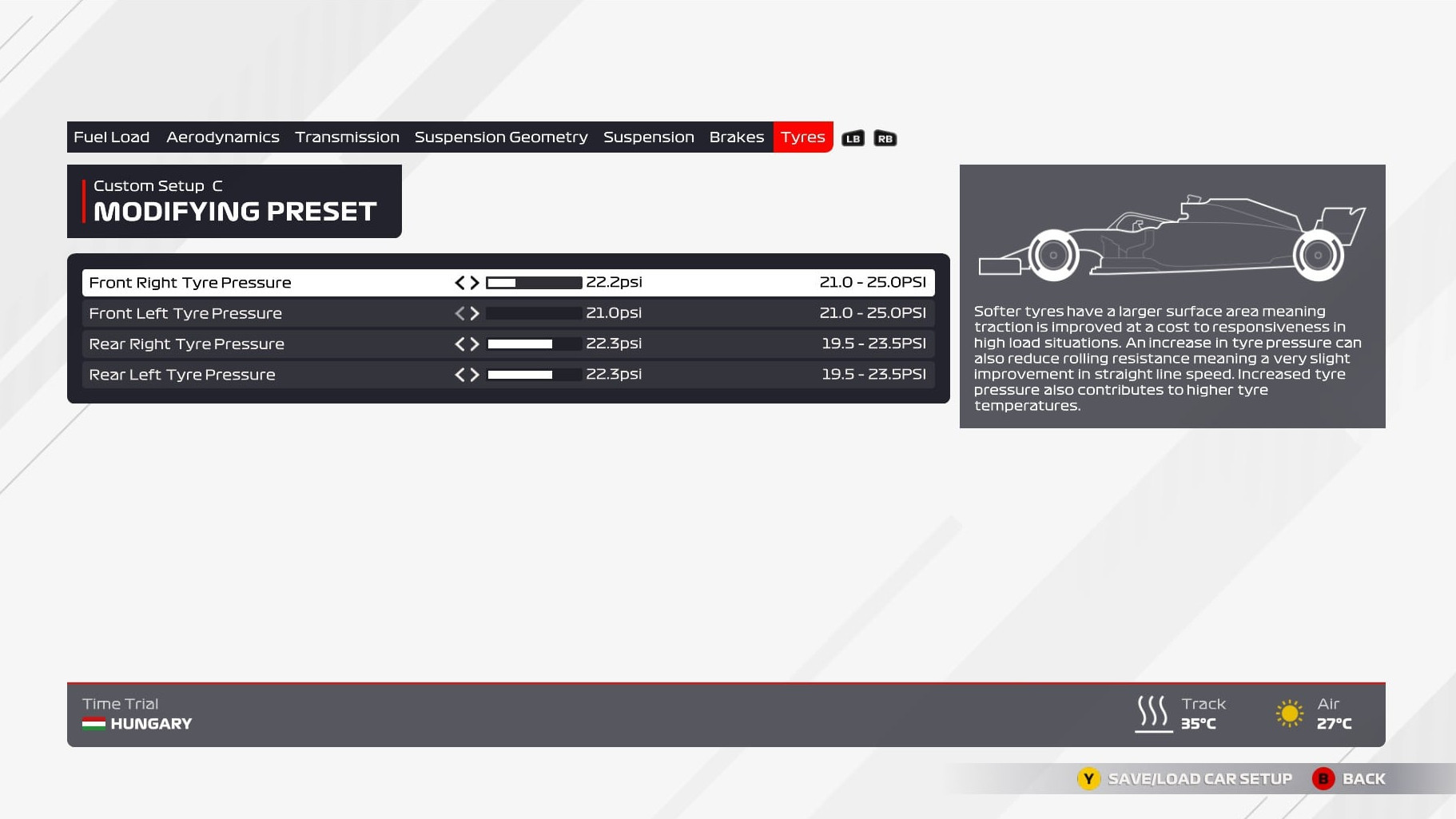 If you liked this setup guide, be sure to check out our British Grand Prix setup guide for F1 2021 as well!

Did you find this setup guide helpful? Tell us on Twitter at @OverTake_gg or in the comments below!
Did you like this article? Please click thumb up or thumb down.


Submit
Tell us more
Tags: formula 1, tutorial
By clicking on one of those buttons you are leaving OverTake.gg