Forza Horizon 5 will feature around 400 cars

The full car list was revealed during the Forza Horizon 5 Let's Go stream on Tuesday. Here's all you need to know about the upcoming title.
Image credit: Playground Games

In the leadup to the November 2021 release of Forza Horizon 5, game developers from Playground Studios have been revealing plenty of information through the Forza Let's Go streams. In the seventh episode on Tuesday, we learned a lot about the upcoming campaign, as well as about the cars that will feature in the latest instalment in the Horizon series.

Did somebody say car reveal? 👀

As teased on Let's ¡Go! today, we're announcing hundreds of cars available day one in #ForzaHorizon5

We'll also be expanding this list with new cars and manufacturers leading up to launch, so check back often for updates.https://t.co/ZPZ39m4HjZ pic.twitter.com/2FapJpxLP4

Developers spoke at length about the new structure of the campaign mode which differs immensely from previous instalments. The game features an array of different motoring sub-cultures to appease everyone. Whether you prefer to race in the streets, on the dirt or if you're just a showoff who wants to perform stunts. Whichever your preferred form of driving is, each event has its own Horizon Festival Hub.

There are six locations for the Horizon Festival. First is the mainstage Horizon Mexico Festival where you begin, then for each category of racing there are Apex (road racing), Wilds (dirt racing), Baja (cross country), Street Scene (street racing) and Rush (stunts).

The game doesn't make you do all of them, it's up to the player to decide which ones they want to compete in. Players will have to find these festival locations yourself though by taking part in Expeditions. This will mean that exploration the outer reaches of the Mexican landscape will be a central part of the game. 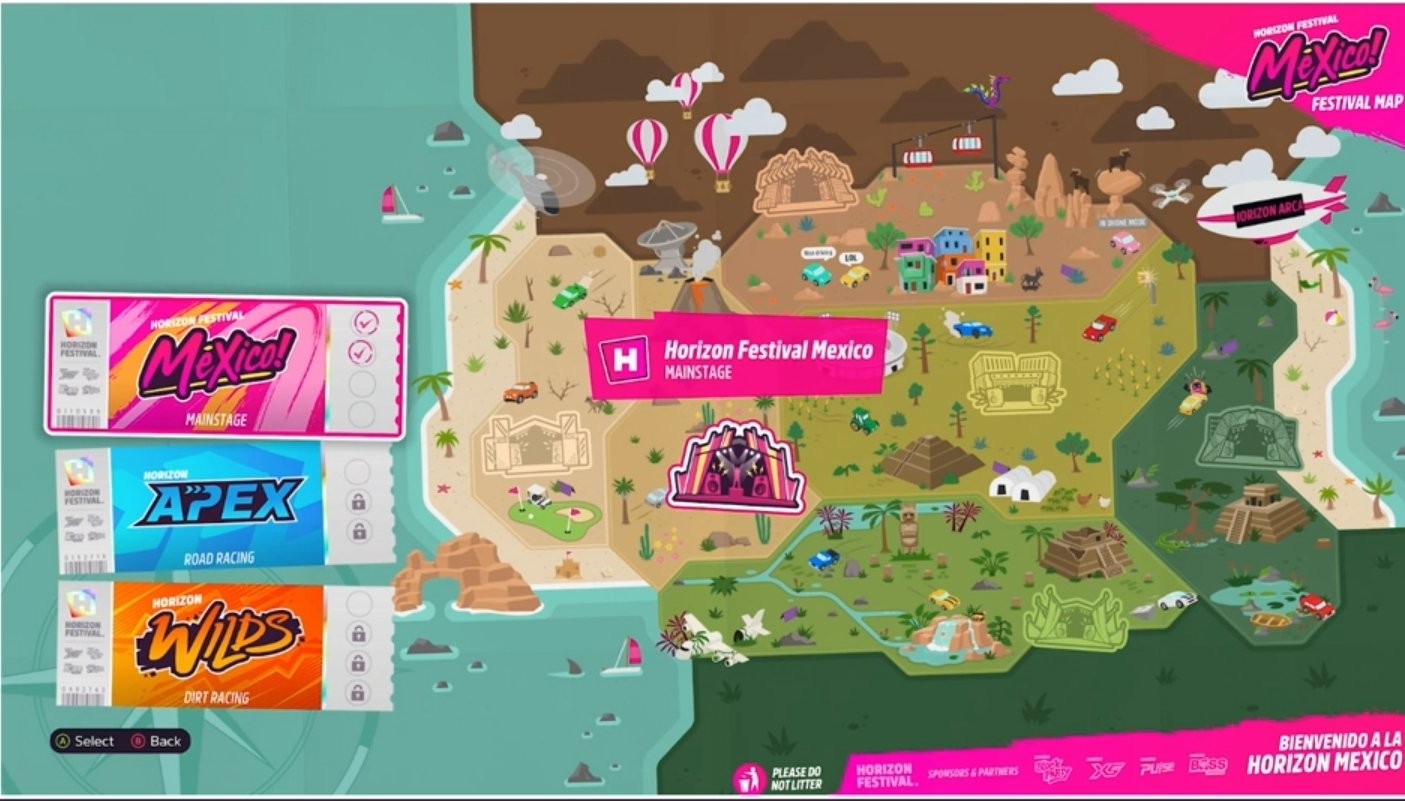 This will be the map that Forza Horizon 5 players will use to navigate their way around Mexico, featuring stylised Mexican art. Image credit: Playground Games

The Festival Playlist that featured in Forza Horizon 4 will be making its return. By completing season content, players can expand their car count with new cars and rewards every week. Speaking of the cars, there's a huge selection to choose from.

One we already knew about is the immensely hyped up Mercedes AMG One which will be the cover car, and features the same F1 turbo-hybrid 1.6-litre V6 engine that has powered Lewis Hamilton to a plethora of world championships.

The car selection is well into the 400 range so it's impossible to feature every single one of them, but rest assured that there's one that will suit every single type of car fan out there. To find out what cars will be in the game, check out the official list on the Forza website.

Forza Horizon 5 launches for Xbox Series X/S, Xbox One and PC on 9 November. Stay tuned to OverTake for more information as it's revealed about the game.

Which car are you looking forward to driving the most in Forza Horizon 5? Tell us on Twitter at @OverTake_gg or in the comments down below!
Did you like this article? Please click thumb up or thumb down.


Submit
Tell us more
Tags: forza, xbox
By clicking on one of those buttons you are leaving OverTake.gg