columnist
Automobilista 2 is having major problems. But not of the kind you may suspect. Let's tell you all about it.
Photo Credit: Reiza

Gather 'round my friends. Today we are discussing the tragic story of a small game. A game so good it had all the ingredients to win over sim racing fans worldwide. A game so polished, yet still missing some core components and, eventually, a game that found a knife in its back. I'll tell you all about it but first let's set the stage.

March 31, 2020, was the arrival date for the newest game from small developer studio Reiza. Automobilista 2. A game that was supposed to put it all together. Graphically a gem. It runs on the Madness engine which is the same as Project Cars 2. The only other competitor in the sim racing space, graphically speaking, is Assetto Corsa Competizione, which runs with much less stability and drops frames, where AM2 just keeps pushing.

The field of cars is superb. Jump from an early 90s Formula Car into a Brazilian stock car and back. You can enjoy a plethora of great vehicles which can compete with the best in the game. Besides that, the VR support is second to none, it feels better than in any other sim and has been fine-tuned a lot.

Many influencers started to pile in and praise the game for some of these aforementioned aspects, with videos even reaching over 300,000 views.

So what is the problem? Doesn't this seem like exactly the type of game you would want to play if you are not an advocate for iRacing or like more variety than ACC can offer? 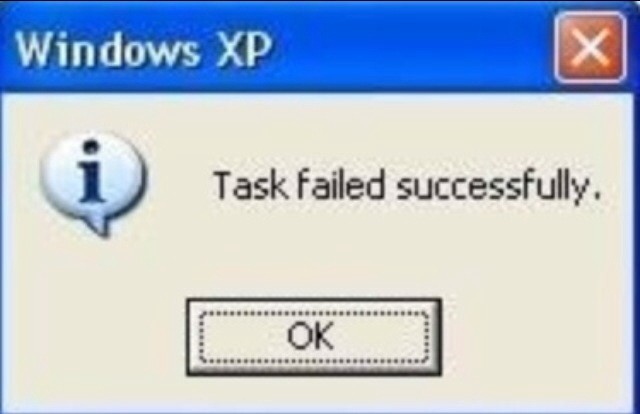 I love me some pop-culture references. The "Task failed successfully"-meme has been around for some years and describes a scenario that is both good and bad. The same concept can be applied to Automobilista 2.

The biggest problem of the game currently and throughout its life has been that the player numbers are abysmally low. On SteamCharts, the game registers a whopping 180 daily players on average over the last month. That is underwhelming, to say the least. 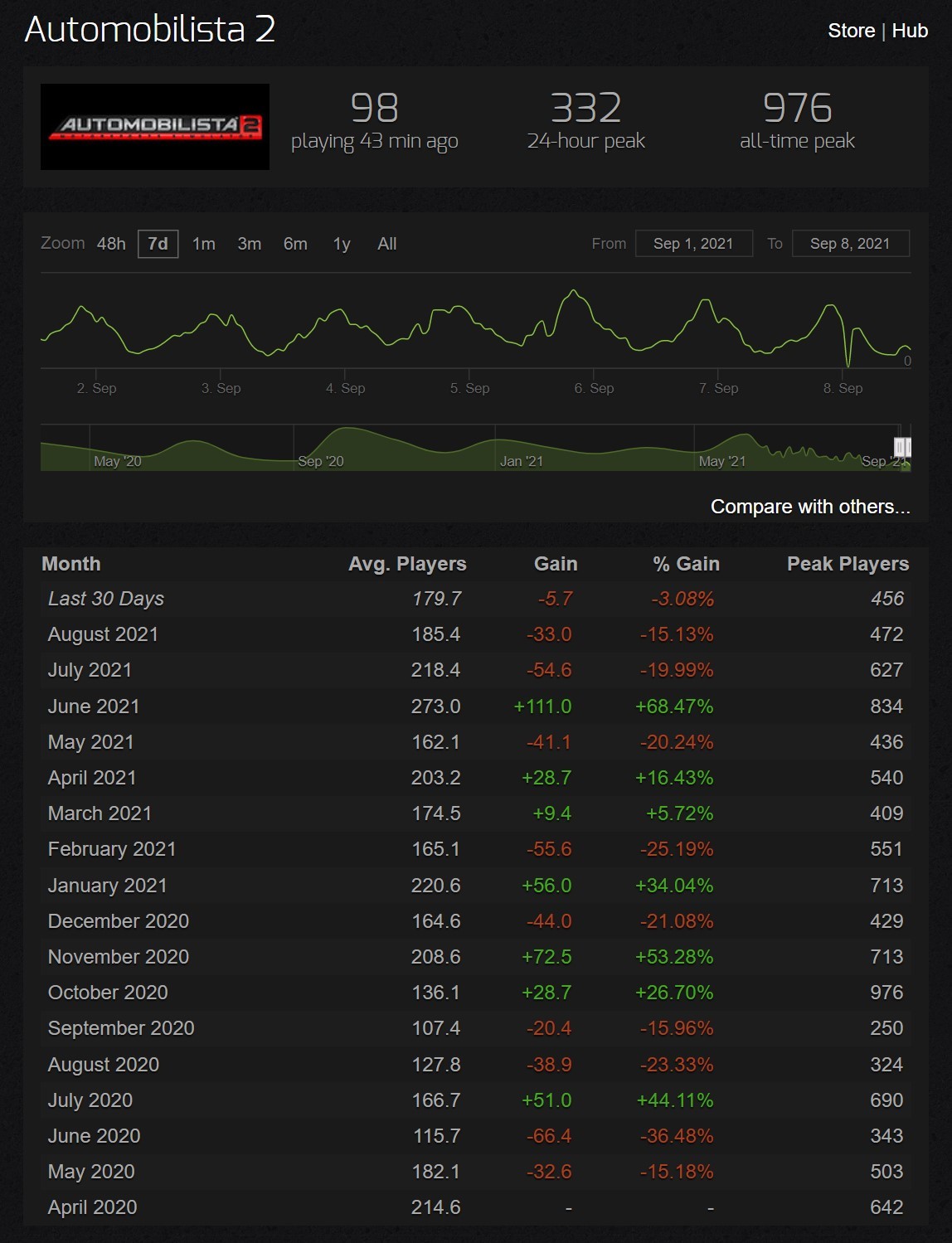 For comparison's sake let's look at a game like RaceRoom. One could argue that it is direct competition for AM2. The game has a comparable team behind it and is miles behind AM2 in some aspects like graphics. Yet somehow, RaceRoom is pulling in close to three times the amount of people every day. 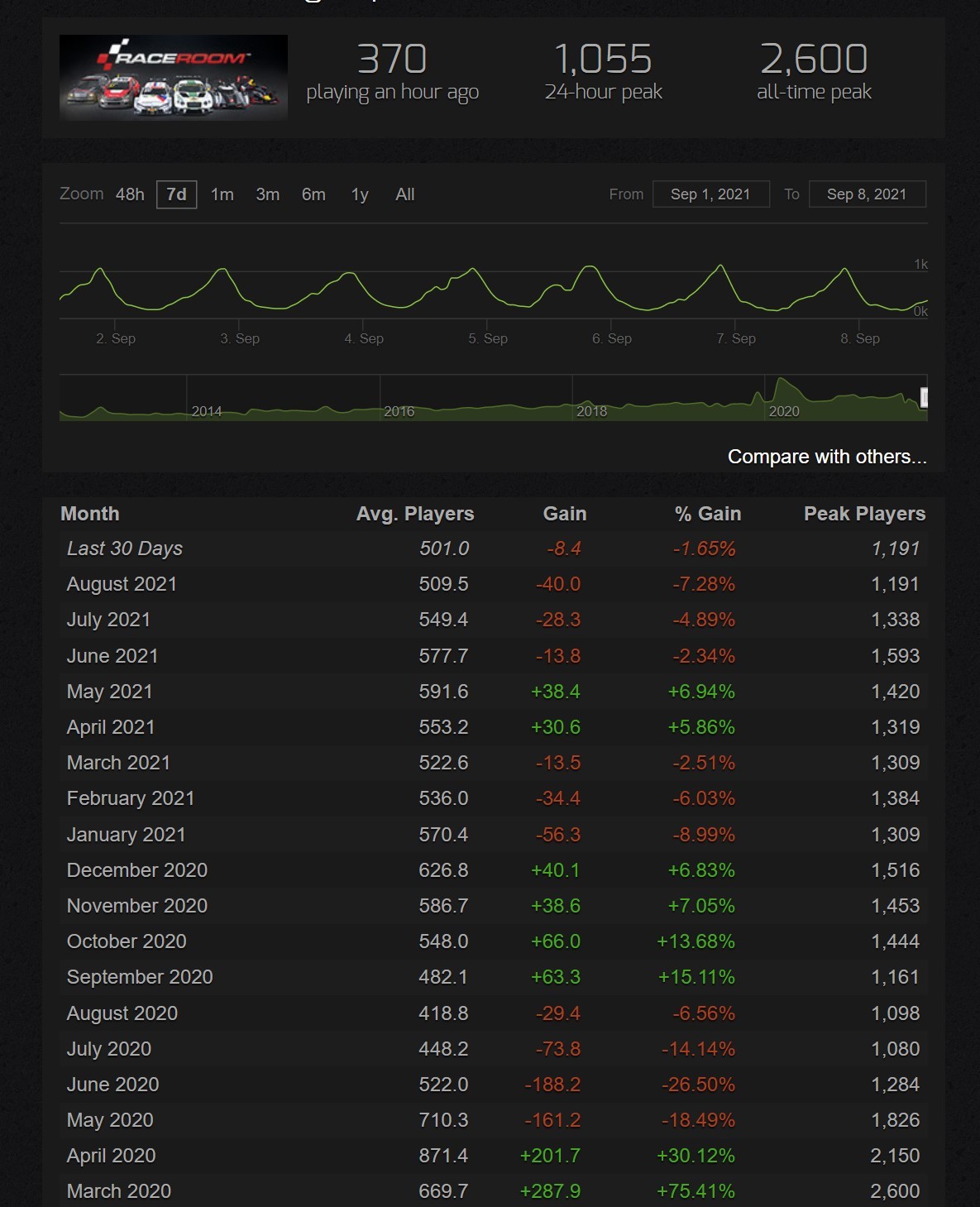 Average number of players for RaceRoom as a comparison. Photo Credit: SteamCharts

If we were to compare AM2 with a game like the original Assetto Corsa, a game that is seven years older no less, it becomes even clearer how bad the situation is. 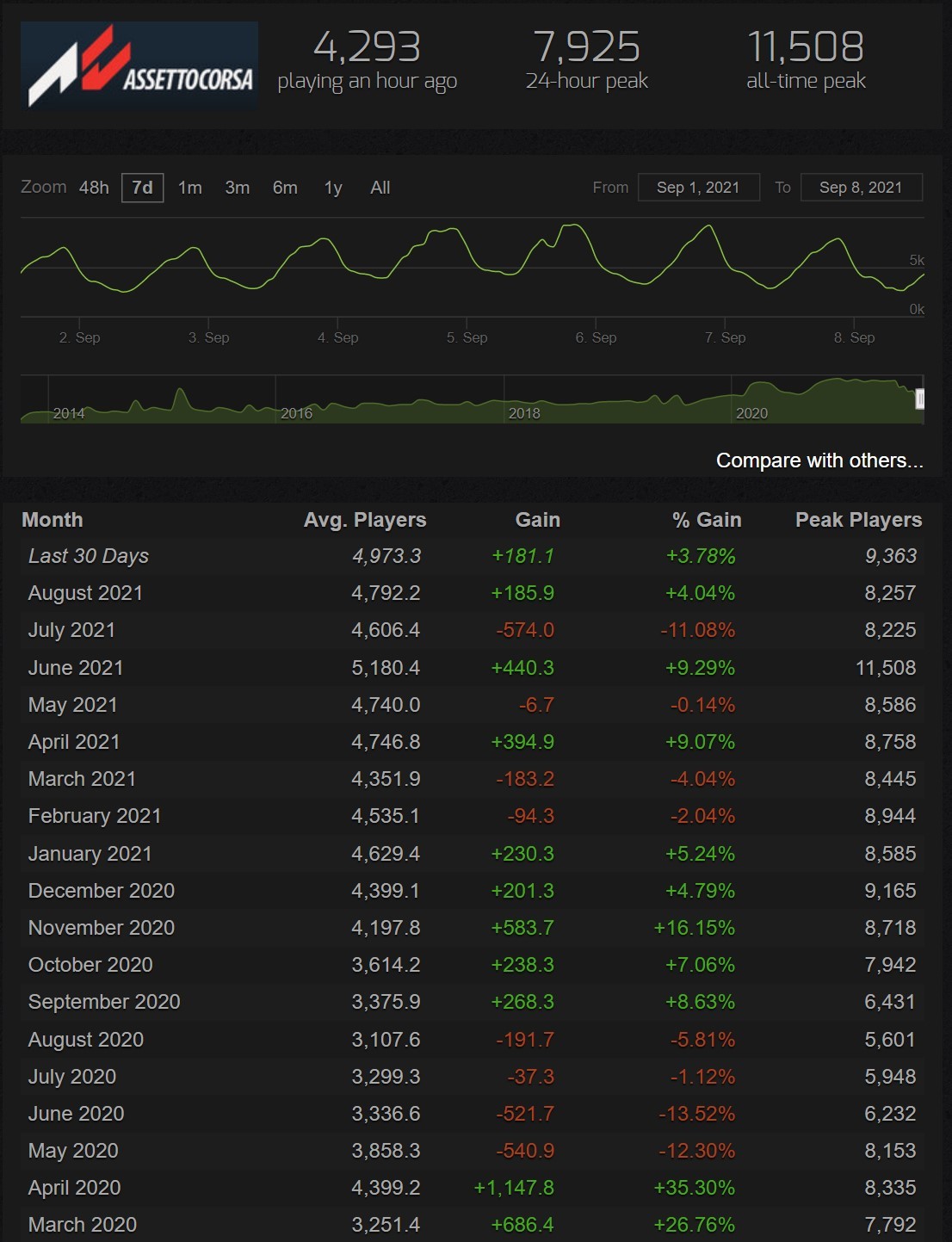 Average number of Asssetto Corsa players as a comparison to AM2 and RaceRoom. Photo Credit: SteamCharts

This points to an obvious conclusion. The game looks to be dead in the water. It apparently sports a tiny community, and about as many people play it every day, as there are twins born into this world. If somebody showed me these figures without any other information, I would be sure that this game surely isn't for me.

Is it maybe the physics engine that feels off? Not really. There are some cars, like the GT3s, who can be a pain in your pipe, but I would hesitate to call that the reason AM2 just isn't up to par.

Is it some vendetta against the developers? No, they are generally very well-liked and work hard on releasing major updates every other month. As seen under this tweet, people are completely on board with what Reiza does.

Our Automobilista 2 September 2021 Development Update is now live! Read all about what we have been working on for #AMS2 here:https://t.co/jFUocYfOL7

Well, why oh why does no one touch this thing then?

Let's get out our scientific coats here and talk about Dopamine. A chemical that is commonly misunderstood. People often think about it as a reward for our brain. But it instead is something our brain produces to motivate us. So, the more Dopamine gets released by our noggin, the more we want to do something. This direct correlation leads to what we know as motivation. There are thousands of factors that can trigger a Dopamine response. Competitive gaming is known to be very addictive for many people. It adheres to a very fundamental need in our brains, which also leads to Dopamine production.

Game developers have long realized that and took it upon themselves to figure out how to motivate people to keep playing. One frequently used method is some elo system in a game's online world—this way, people can have the goal of working towards becoming the best at what they do. 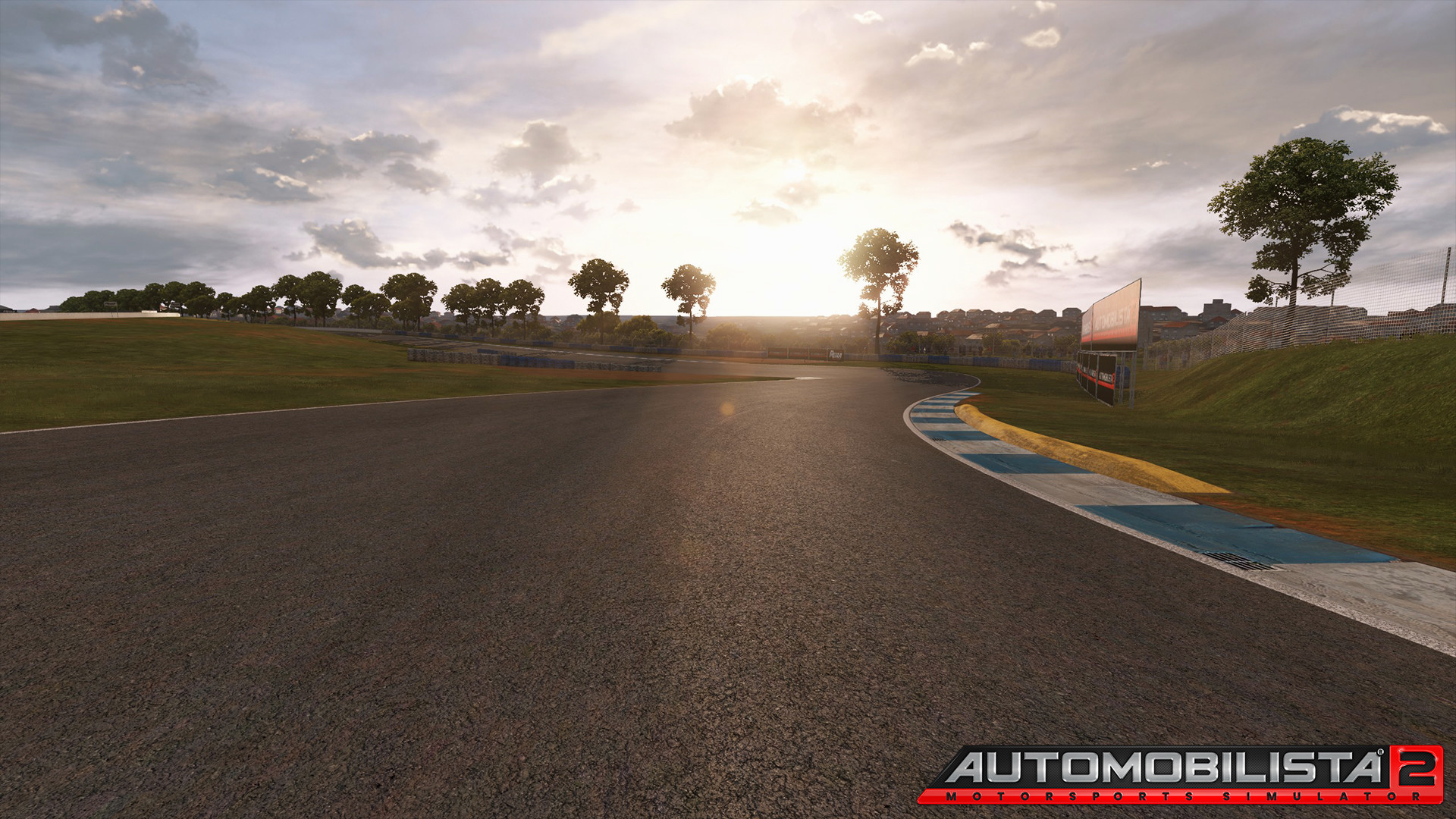 Beautiful graphics can be found in AM2.Photo Credit: Reiza

AM2 lacks exactly that. The online mode is pretty much nonexistent and has nothing to play for. No ranks, no rating, no reason to drive other than for the fun of it.

While fun sounds like something you should always want, the blatant exclusion of a rating system is a bleeding wound. You can be idealistic and say people who race for rating don't care about the game, but the fact remains that RaceRoom, where there is a ranked mode, draws in so many more people while objectively being behind on several aspects.

Of course, there are games like the aforementioned Assetto Corsa, which aren't all that big into online racing as well. But the original AC offers so much mod support that people find replay-ability through that.

Compared to other titles, Automobilista 2 is like a Dopamine detox for many players. You will quickly lose interest if you have nothing to do but race against the AI a million times.

In the intro, I mentioned that Automobilista 2 has a knife in its back. While maybe a bit hyperbolic, it may be true. Ironically enough, the community are the ones pushing it in. But how can a super supportive community that wants nothing but good for the game itself be complicit in its murder?

In psychology, there is a concept known as toxic positivity. It basically says that in situations where people experience too much positivity, it is likely to turn around and become a negative influence.

I think this is exactly what is happening with AM2 in real-time. While it is an incredibly refined game with great graphics and a passionate developer behind it, the game has fostered this community of relentless affirmation. There rarely are big points of critique beeing brought up anywhere. Be it the forums of Reiza, or in videos. More people are talking about how good the game is than are actually playing it. 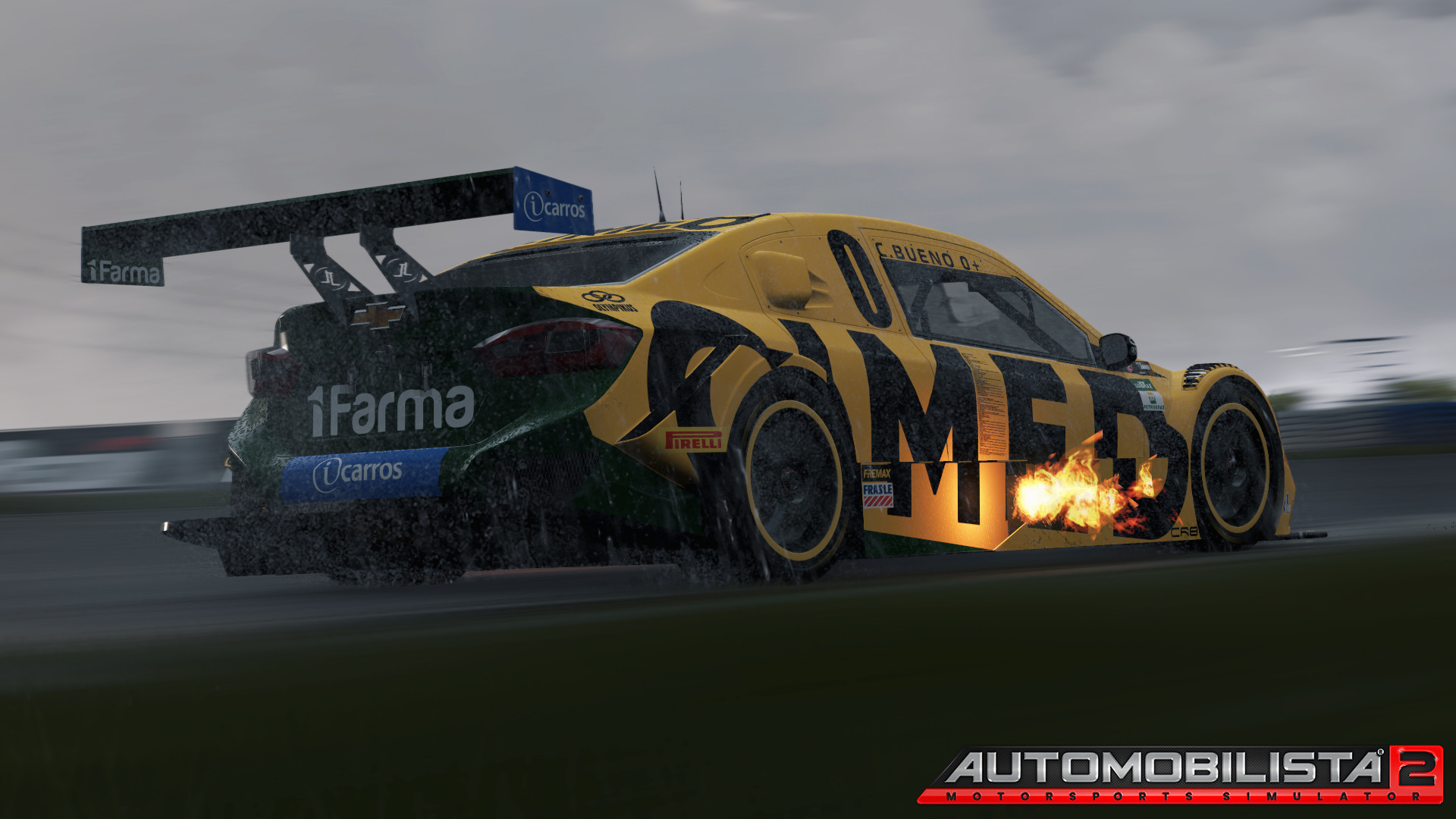 A lot of effort is put into the car-roster. Photo Credit: Reiza

This is despite the fact that there are legitimate points one could moan about. For example, money seems to have been allocated to the wrong places with AM2. Instead of working on the roster of cars that is already more than sufficient, there should be an effort to make players stick with AM2.

Automobilista 2 is a good game. Reiza will continue to improve it and add new things, which is awesome. But if everything stays as it is, I see no future for AM2 amongst the upper echelon of sim racing games.

Our previous AM2 video:

What do you think of my opinion on Automobilista 2? Tell us on Twitter @OverTake_gg or in the comments down below!
Did you like this article? Please click thumb up or thumb down.


Submit
Tell us more
Tags: opinion, gaming, community
By clicking on one of those buttons you are leaving OverTake.gg