How to add movement to your sim rig featuring GamerMuscle

We all love esports racing and for most fans, the more realistic the experience gets, the better. But there is just once crucial aspect that is always missing – there is just no movement! What if we were to tell you that there are solutions which can pimp your sim rig, taking it from being a stationary, lifeless assemblage of steel to a moveable cockpit that lets you really feel the thrill of going full speed?

Okay, well, it's almost true: There motion platforms that move the driver around in different ways. Let's dive into the complex world of sim rigs and take a look at the options, pros and cons. And to get the best insights from an sim racer who already tested a broad range of motion rigs, we asked James "GamerMuscle" West for his expertise.

How to add movement to your sim rig

There are basically four different tiers when it comes to bringing movement into your rig. Many fans might have seen the colossal machinery at expos or conventions where a driver sits in something that looks like a trebuchet and gets hurled around. However, there are also smaller options to bring a sense of movement which can easily fit in your room. Movement can be created by: 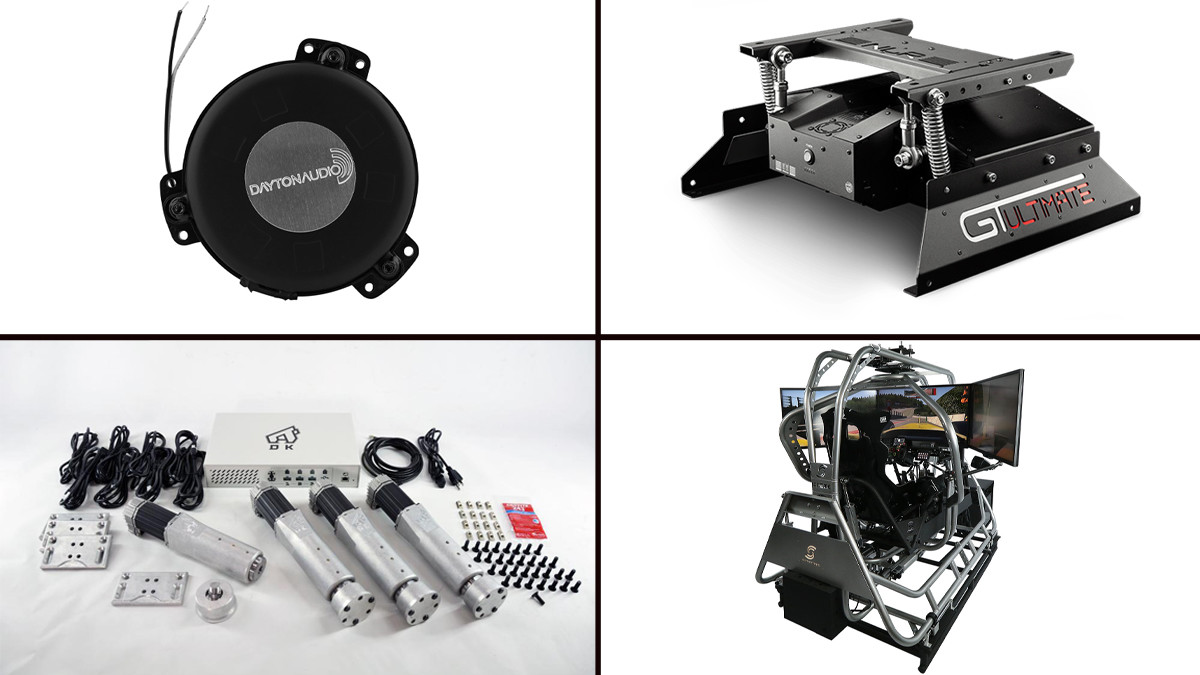 Now, what do these different types even do? The first three kinds in this list are suitable for a casual setup at home. If you just want to get a little bit of movement, GamerMuscle has a recommendation for those with a smaller budget: You can add tactile transducers to your gamer station for about €170 (£190). These add vibrations to your chair and pedals, making the games feel a little bit more realistic and immersive, while also giving information about road texture and bumps in the track.

The next step in costs and motion are the seat movers which you can put underneath your seat for about €2,900 (£3,300). An example is the Motion Platform V3 from Next Level Racing. The rest of your rig remains immobile, but your seat reacts to your steering. The Motion Platform V3 also includes the vibration mentioned above.

Next up is a D-box type solution with actuators on the corners of the sim rig for about €4,000 (£4,600). Apart from D-Box, Sigma Integrale or PT-Actuator are common choices. For GamerMuscle, these bring the best experience for both casual and pro drivers. Basically, four pillars with a servo motor are mounted under each corner of your rig, then, with some additional wiring, your rig gets pushed and tilted. For a better visual undestanding, check out this video by Sim Racing Garage.

Last but not least, there are the large simulator platforms with hexipods that are also used for flight simulators, such as Force Dynamics. While these are both too large for most home setups and too costly with prices up to €50,000 (£58,000), we definitely recommend you to test one if you happen to see one at a convention.

The best and the worst aspect of motion options

GamerMuscle has a clear answer as to what is the best aspect of these features: you can actually feel what is happening in the game. He explains that it is like a force feedback wheel, but you're feeling it with your whole body. It also abolishes the thought of being stationary. "Your normal solid simulator feels a bit dead, but motion rigs make you feel like you're inside something that is moving".

But those who are now interested in testing out this experience already noticed what, according to Gamermuscle, is the biggest issue of motion platforms. Both the expense and the size of a motion rig are extremely high, meaning it costs a lot of money and takes up a lot of space.

Additionally, there are some less significant additional drawbacks. You need extra controllers for the servo motors, a power socket that provides enough power; the installation is complex.


"Less is more": Don't overdo it on movement!

The range of movement you can add to your sim rig is quite broad, going from small vibrations to your seat tilting to your entire body while your setup is being swirled around. GamerMuscle states that for practical use, it is not necessarily more realistic to experience the biggest movements.

Because of physics, it takes time to move something from A to B. The more you move, the more delay there is. If a motion simulator moves less, it's easier for it to operate in a way that stays in line with the simulator, as James explains, "The less it moves, the less it will move in a way that is unrealistic". GamerMuscle further explains that those traditional drivers who use sims as a practice tool want less motion as well. Vibration and suspension compression type movements feel more akin to driving real car.

There are of course also large motion rigs that work well, such as the ones that Formula 1 teams use. These sometimes even have two systems in place, one for wide sways and heave movements, but also a smaller one for quicker movements. These cost even more money and require a higher level of maintenance.

Do these options even feel like driving a real car?

But let's say you want to get the biggest, most sprawling movements as they seem to be the most similar to cruising around in a real car, does this even come close to really driving? "I personally have never used a motion rig that does G-forces like it feels in a real car. So sustained forces like if you're going through a corner continously and get pushed into your chair. Or when you accelerate for a long time, you're getting pushed back". A motion rig can tilt, but doesn't feel like G-forces. To combat this issue, some F1 teams are using G-Seats that are equipped with air bladders or paddles that constantly push into the side of the driver.

The most similar aspect to real life however is the up- and down-motion. The heave when driving over bumps for example is done really well, according to GamerMuscle.


Do you become faster thanks to the motion?

The final big question is: Do these systems actually help you with your performance, or are they more of an enjoyable gimmick?

"They make you more aware of certain track details", explains James. For example, bumps can make the car a little bit more unstable which you would not have noticed without a motion rig. But in general, they won't help you become better or make you any faster. It's about immersion and making sims feel more realistic. And for many fans, this is extremely worth pursuing. After all, we all just want to have the most fun with our beloved pasttime and bringing a little bit of movement in can certainly create a new experience!

Which motion systems have you already tested out, and which can you recommend? Tell us on Twitter at @OverTake_gg or in the comments below!
Did you like this article? Please click thumb up or thumb down.


Submit
Tell us more
Tags: gaming, interview, tutorial, hardware
By clicking on one of those buttons you are leaving OverTake.gg