We here at OverTake are running a new esports competition called the OverTake F1 Dream Team Series, featuring big name content creators!
Welcome one and all to the OverTake F1 Dream Team Series. This new esports competition will allow community members the chance to race against, and for, some of their favourite content creators. Keep reading to learn all about the format, the four races on the calendar, the ten competing YouTubers and Twitch streamers and everything else you need to know!


What Exactly is the OverTake F1 Dream Team Series?

As the name suggests, the OverTake F1 Dream Team Series is run by us here at OverTake. The competition will be held on F1 2021, certain fans will be selected by their favourite creators to fight on their behalf in pursuit of the community championship. Meanwhile, the creators themselves will be battling it out for their own creator's championship title.

Each race will consist of a full-length qualifying session with three stages, exactly as it is done in the real thing. Once the grid order has been determined, you and your favourite creators will race over a 50% grand prix distance.

The points system is a little different to the usual F1 format, with first, second and third being worth 15, 12 and 10 points respectively. Everybody down to and including the tenth-place finisher will score points, and there will be a bonus point available for the fastest lap.

As for the schedule, there will be four race events running weekly from 26 November until 17 December, each at a different venue. These circuits are, in order: the Shanghai International Circuit in China, Silverstone in the United Kingdom, the legendary Spa in Belgium, and finally something a little bit new in the form of Portugal’s Portimão.

Who Will be Taking Part?

Our field of content creators features a fair few big names in the world of esports racing. Perhaps none more so than the shed dweller himself, Jimmy Broadbent. Alongside Jimmy in the Aston Martin is a familiar face here at OverTake, James ‘James 'Gamermuscle' West’ West.

Then there are the boys in papaya. Driving for McLaren we have Mathieu ‘Mathieu 'rAii' Wacker’ Wacker, of the DiePixelHelden (Pixel Heroes) YouTube channel. Alongside this German is another, in the form of Twitch afficionado Jay, or Jay (PietSmiet). 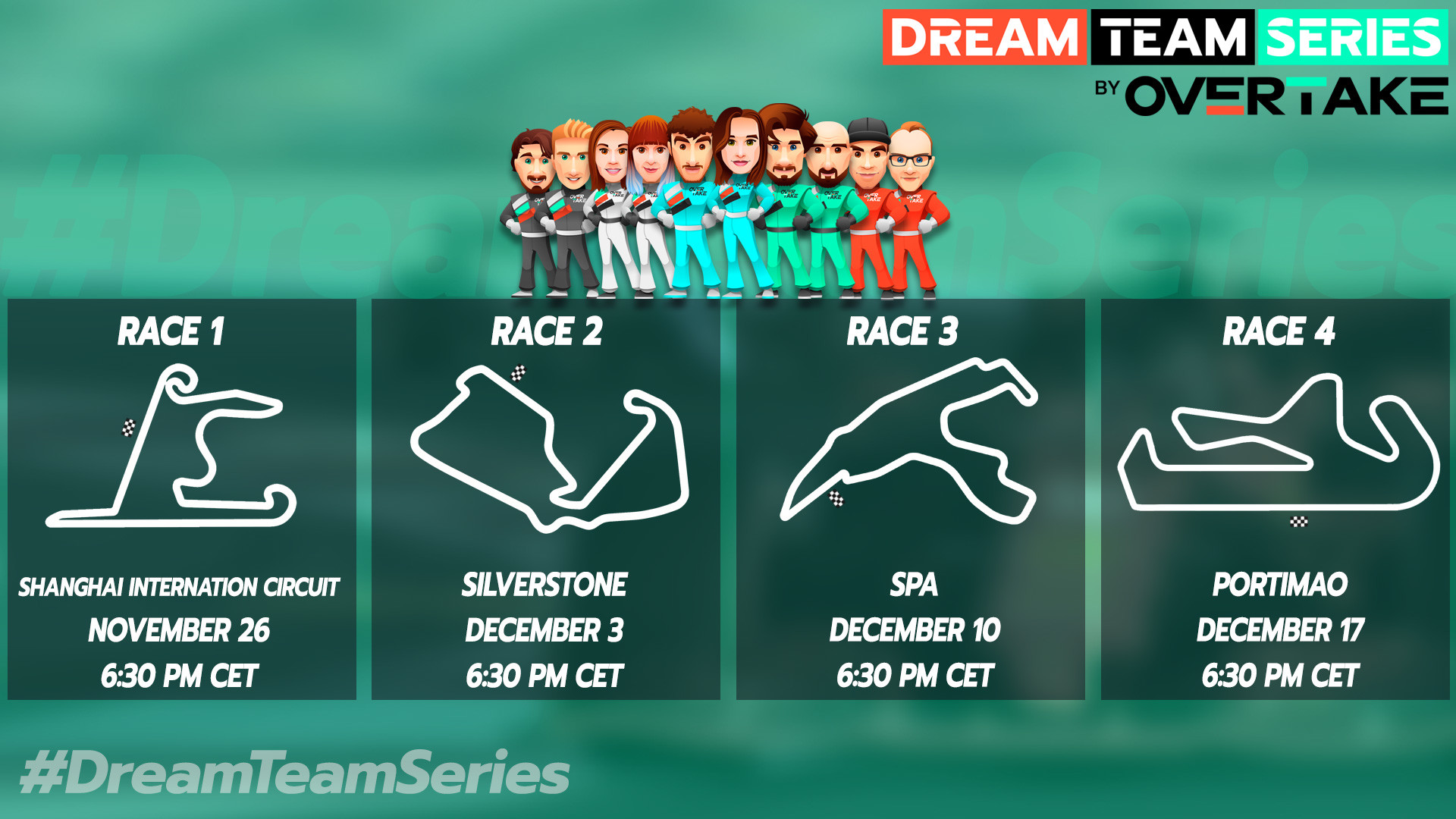 Up next is the Mercedes pairing, which features two of our favourite simracing creators. Dutch driver and Clash of Racers veteran Maxime MXM will in one of the silver, or black, arrows, and joining her will be McLaren Shadow’s own Emily Jones!

Who better to drive for French outfit Alpine than two French drivers? With this in mind, we have got twitch streamer Hydro aka idreau_ to take part alongside compatriot and fellow streamer AnaOnAir. Will team France have what it takes?

Last but by no means least comes the Ferrari team. First to line up for the Scuderia is F1 streamer and YouTuber, ElReyGuiriPlays. The Spaniard will be welcomed to the team in red by none other than an ex-F1 Esports driver for FDA Esports Team and current Ferrari Esports analyst, Amos Laurito.

How can I watch?

Each of these teams has already selected the community members who will participate alongside them, and the races will be broadcasted each week starting with the race in China on Friday, 26 November. To catch all the action head on over to the OverTake YouTube channel at 6:30pm CET each Friday and watch the events unfold in the live streams.

Who will you be rooting for in the OverTake F1 Dream Team Series? Tell us on Twitter at @OverTake_gg or in the comments down below!
Did you like this article? Please click thumb up or thumb down.


Submit
Tell us more
Tags: community, competitive, esports, f1 2021, formula 1
By clicking on one of those buttons you are leaving OverTake.gg