With the year nearly out, it's time to look ahead to the next F1 game. Here are the features we want to see in F1 2022.
Image credit: Kunos Simulazioni

There's always a lot we see being requested to Codemasters for the upcoming F1 games, so what harm can it do to add onto that pile? There are certainly a lot of basic requests, improvements to online multiplayer are always at the top of many people's lists. 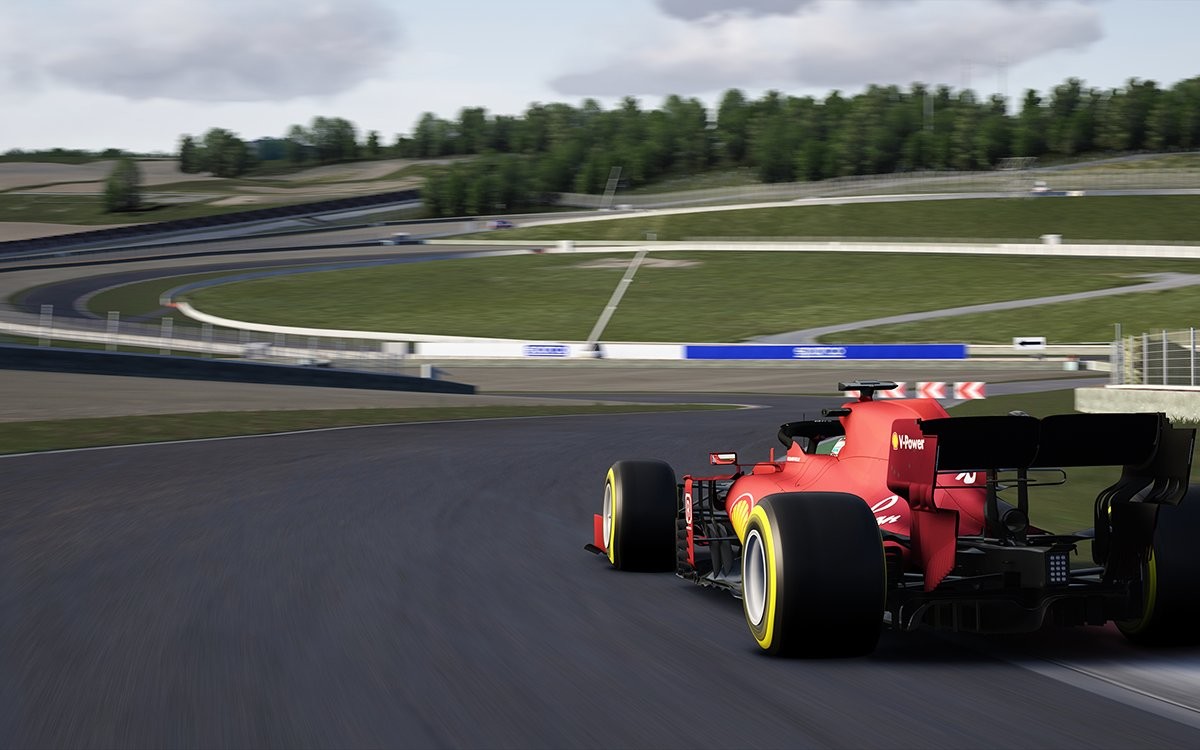 Mugello is one of several tracks that hosted F1 in a heavily restructured 2020 season. Image credit: Kunos Simulazioni

Typically, the F1 games really only feature tracks that are on the current season's schedule. However with F1 2020, we had the closest thing we have ever had to a fantasy track in the Codemasters F1 titles in the form of the Hanoi Street Circuit. It was intended to play host to the Vietnam Grand Prix in 2020, but as we all know, that never happened.

The circuit was then removed indefinitely from the F1 calendar for reasons unrelated to its initial cancellation. Due to the 2020 season having to be rescheduled, it resulted in the inclusion of a lot of tracks that F1 either hadn't been to in a while or that had never before hosted F1 Grands Prix. Circuits like Portimão, Mugello and the sub one minute Bahrain Outer Layout proved popular new additions whilst old favourites like Imola, the Nürburgring and Istanbul Park made glorious returns.

In the case of Portimão and Imola, they were re-added for the 2021 season as well and, as a result, they would be featured in F1 2021 along with the brand new Jeddah circuit. But due to the time constraints, Codemasters elected to add all three new tracks as post-launch free DLC, with Portimão added in September, Imola in October and Jeddah in November.

It's 𝙃𝙀𝙍𝙀! Delve into the exciting updates available in #F12021game from today and arriving in the months ahead

During the real-life season, Istanbul Park and also the Losail circuit in Qatar were added. However, Codemasters weren't able to add these in on such short notice. So, along with all the tracks brought in for 2020, could we see Codemasters going down this path of adding in these tracks to F1 2022 post-launch?

We're not about to suggest absurd additions like Circuit de la Sarthe, the Nordschleife and Bathurst, but certainly ones that have had F1 race there in recent years. Besides, they've added classic versions of tracks before in F1 2013, when you could drive 80s and 90s versions of Brands Hatch, Jerez, Imola and Estoril. So why not?

We would also love to see the reintroduction of tracks that have proven popular in recent years that have vanished from the F1 calendar. Like how MotoGP21 has Brno, Donington Park and Laguna Seca, maybe Codemasters could add back in some old favourites like Hockenheim and Sepang. 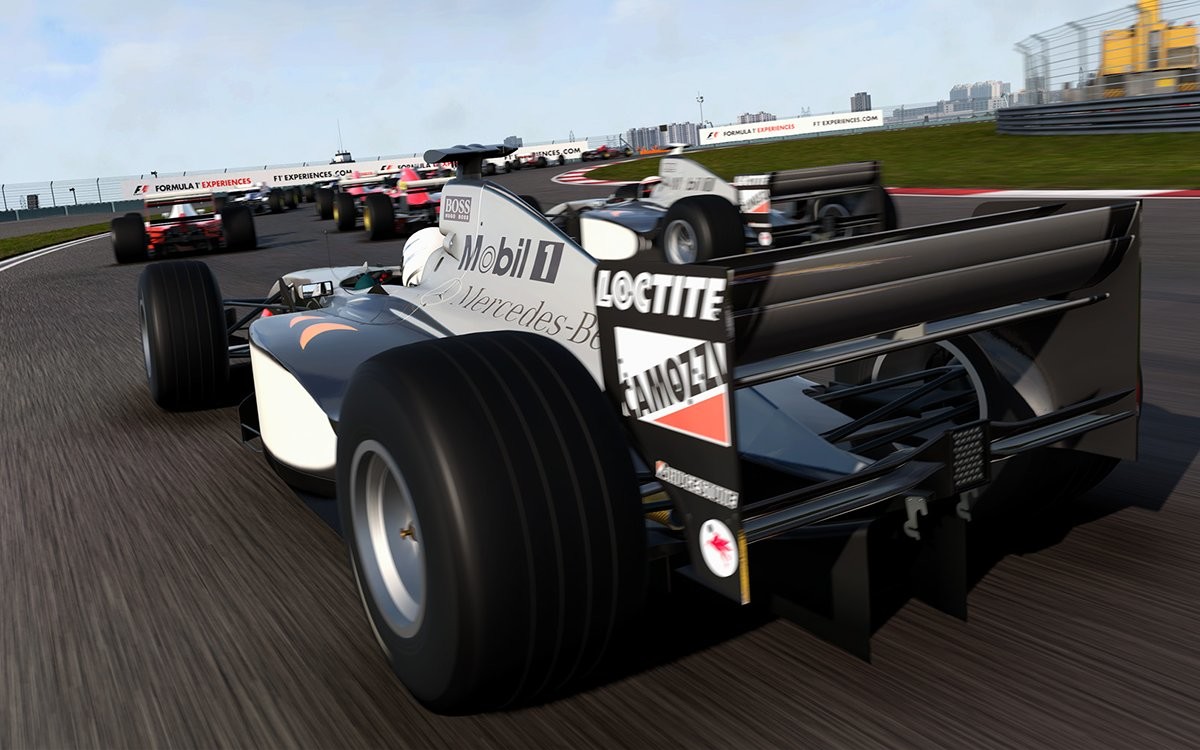 The classic F1 cars were a hugely popular feature that was absent from F1 2021. Image credit: Codemasters

Why were the classic cars removed? In F1 2013, there were a lot of noteworthy cars from past seasons which were then removed for the following year's release. Some were brought back in F1 2017 and these were added to every year up until F1 2020.

A few cars were removed over the years. Some were perhaps understandable, like the 1995 Ferrari in which Jean Alesi took his sole Grand Prix victory and the 2002 Ferrari that Michael Schumacher raced to win his fifth world championship. Given the tendency of the playerbase to opt for the 1990 and 2004 models to get their V12 and V10 Ferrari fix respectively, the removal of the '95 and '02 cars make some sense.

With that being said though, F1 2020 saw all the cars from the 1970s removed after having featured in F1 2019. This was such a shame because whilst they were not the fastest cars, they were very fun to drive and certainly unique. This was only the precursor to the complete removal of classic cars from F1 2021.

At the point at which the classics had been removed, Codemasters had nailed the selection. You had the likes of the 1988 McLaren, 1992 Williams, 2004 Ferrari, 2008 McLaren, 2009 Brawn, 2010 Red Bull and so much more, pretty much the greatest hits of great F1 cars over the years. Not having them leaves the game hollow. They were a great addition to have, just like Formula 2. Speaking of which.. 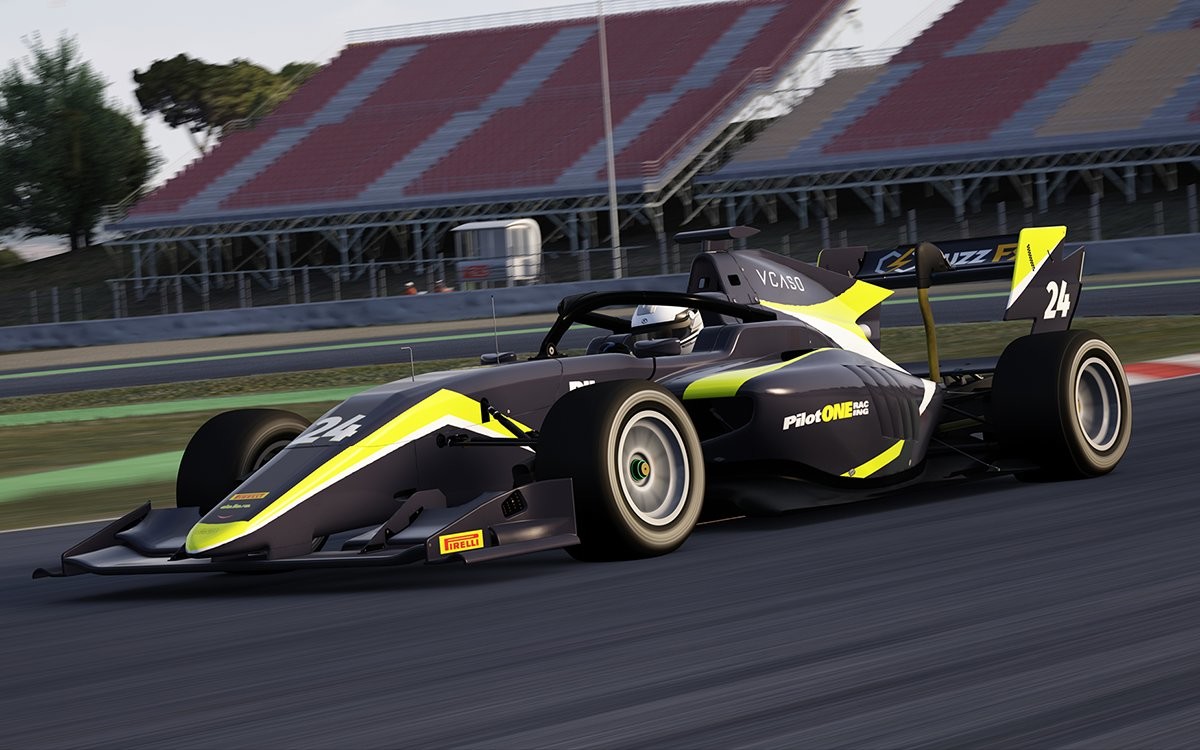 After F2 cars were brought in for 2019, F3 cars are the next logical step. Image credit: Kunos Simulazioni

For years, the community has requested that the F1 games feature a full on motorsport ladder to allow for deeper career progression, including karting and the lower formulae. Codemasters somewhat answered that in F1 2019 when they added FIA Formula 2 cars, but as for a full on racing ladder beginning with club-level domestic karting, that's never going to happen.

This is partly because anything below FIA Formula 3 does not visit all the same tracks as F1. For example, ADAC F4 visits the likes of the Lausitzring, Oschersleben and the Sachsenring. Italian F4 goes to Vallelunga and Misano, while British F4 races on Knockhill, Thruxton and Oulton Park (okay those last three would be pretty insane in an F1 car). You get the idea.

There's also the fact that national FIA-certified Formula 4 championships don't always use the same chassis so you'd have to feature several different kinds of F4 cars, and then that's not even accounting for the vastness of karting as well. So yes, it's just too much.

FIA Formula 3 on the other hand, that's entirely possible since it races exclusively on the same tracks as F1 and F2, it's a surprise that the series hasn't been added in already. The MotoGP games by Milestone have for years included the lower rungs of that particular motorsports ladder, with the premier class being joined by Moto2, Moto3, even MotoE and the Red Bull Rookies.

Perhaps this is somewhat optimistic considering Codemasters' slow rate of progress when it comes to the online side of the games, but we can dream, right? With F1 2021 having released on both PS4/Xbox One and PS5/Xbox Series X, it could point to the PS4 and Xbox One versions being discontinued for 2022. Perhaps now is the time - with the step up in performance of the new gen consoles compared to PC - for the Codemasters F1 titles to join games like Rocket League, Fortnite and the most recent Call of Duty instalments by enabling cross platform play.

The way it could work in the game is to have something reminiscent of the 'club' system in Rocket League, where players from all platforms can join, making it easier to send invites out for lobbies. This could be used in the F1 games to help run content creator's open lobbies and organised competitive racing as well. You could even have a tag for every club in the form of four or five character prefixes next to player names. For example, if we here at OverTake had a club in the game, our tag would be [OVRTK]. Players can join an unlimited number of clubs with one being their active club that would appear next to their name. 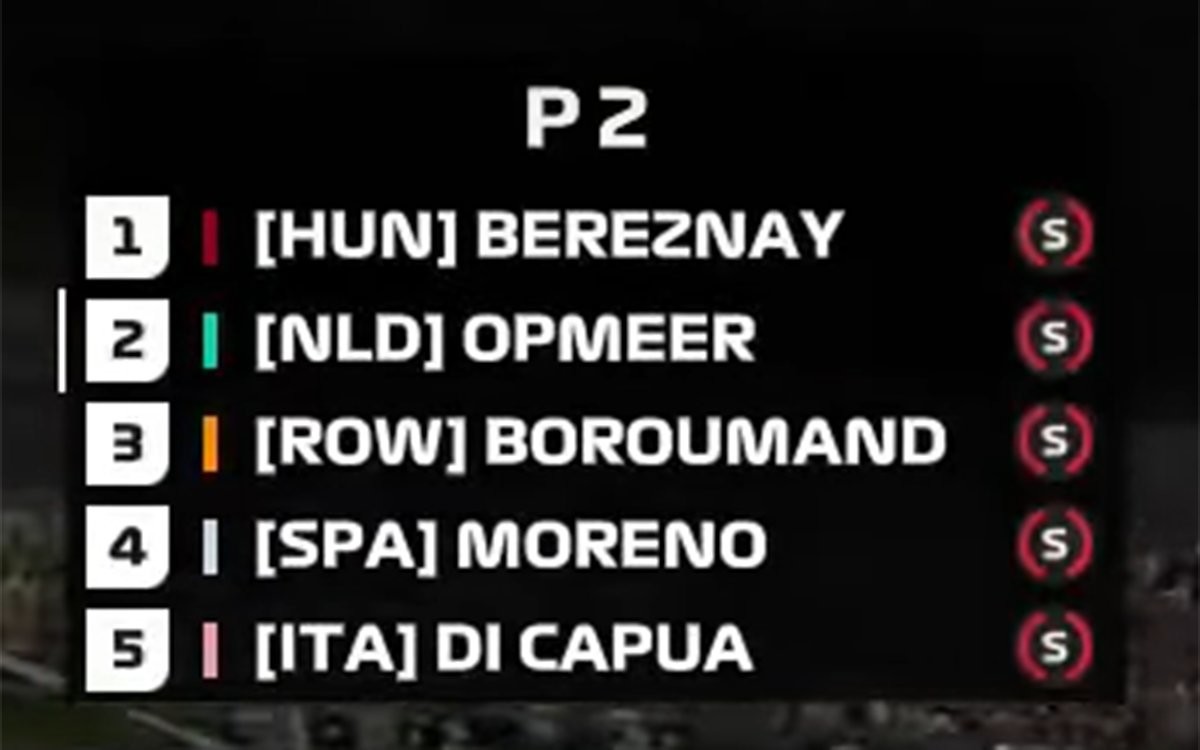 In a league racing competition based on nationalities, drivers had to change their display name to incorporate their country's three letter codes. Image credit: Jarno Opmeer

If a well known content creator is running an open lobby, it's 99 times out of 100 going to be taking place on PC, so console players often miss out. But even without that factored in, league racing in particular would benefit hugely from not having to spread competitors across multiple platforms. Furthermore, lobbies will be more likely to fill up with a wider pool of available players.

Speaking of league racing - which over the years has been hugely neglected by Codemasters - there are many great features that first appeared in MotoGP19 that would be great to see come to the F1 games. These being the likes of live race director mode and access to replays, which will be a league racing caster's dream.

Okay so this one is probably the most unlikely, and we will get into why. But first, if you've played Gran Turismo Sport, you will know of the amazing livery editor they have in the game with which you can make your own car liveries, helmets and suits. It became almost as beloved a feature of the game as the actual driving! We did a tutorial on how to make liveries which you can read here.

You can upload custom decals as SVG files and make absolutely anything, so you would assume that with the multiplayer car that you can use in My Team and online, that it's a slam dunk decision to have a similar tool in F1 2022. However, that's probably never going to happen, and that's because of the Podium Pass. 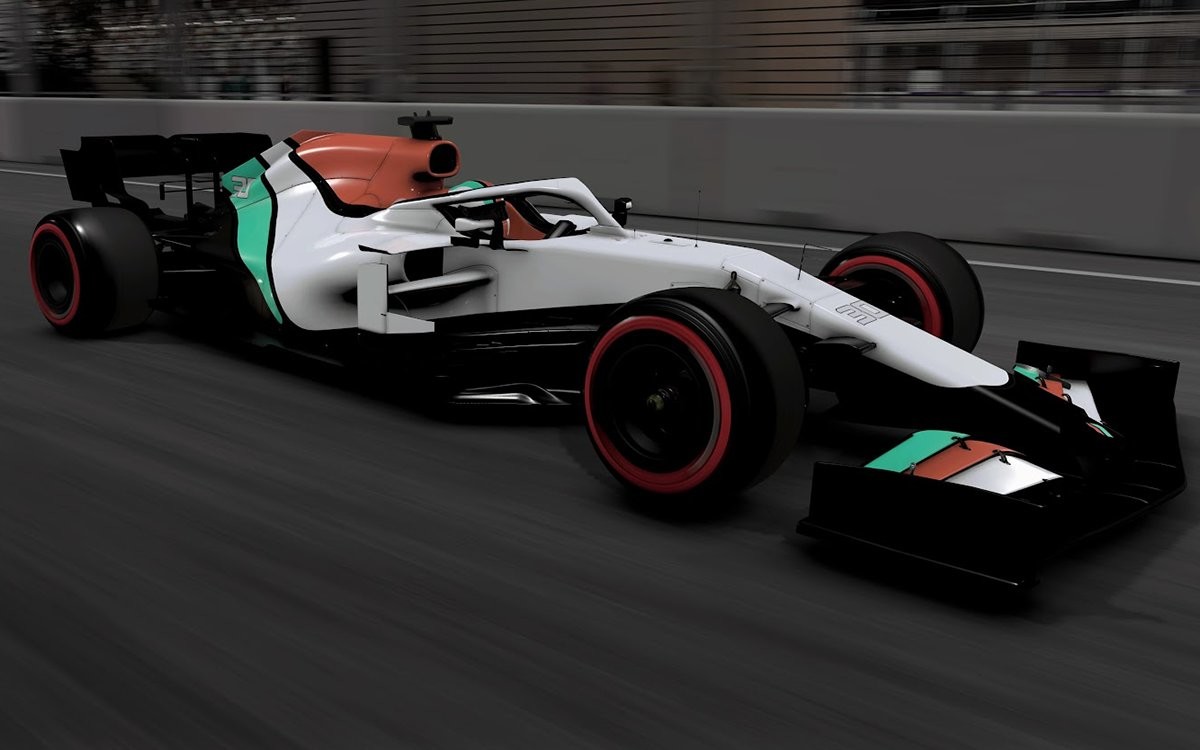 This is the closest we can get to an OverTake livery in F1 2021. Image credit: Codemasters / EA

Starting in F1 2020, Codemasters added a 'Battle Pass' system, called 'Podium Pass', that a lot of mainstream video games have adopted to encourage players to play the game and earn cosmetic items. These include everything from victory radio calls, funny dances on the podium and most importantly, car liveries, helmets and driver suits.

Infact, in the current season of the Podium Pass, you can earn items designed by McLaren's Daniel Ricciardo and Williams' George Russell. As is the case with a lot of these games, you can pay to unlock certain items, so why would Codemasters and EA allow us to design our own items if it meant they wouldn't get any money?

So this one is probably the only one on this list that is never going to happen and that is a shame. Nevertheless, we can dream.

What new features would you like to see added in F1 2022? Tell us on Twitter at @OverTake_gg or in the comments down below!
Did you like this article? Please click thumb up or thumb down.


Submit
Tell us more
Tags: f1 2021, formula 1, codemasters, ea
By clicking on one of those buttons you are leaving OverTake.gg