With the F1 title going down to the wire in Abu Dhabi this weekend, we thought we would help those of you trying out the circuit by giving you this Abu Dhabi setup guide.
Photo credit: Codemasters / EA

Unlike in this season of real-world Formula 1, Abu Dhabi in F1 2021 is still in much the same form as it has been since its addition to the F1 calendar back in 2009. As such, there’s not been a huge change in the ideal setup when compared to F1 2020. Nevertheless, the way setups feel in game did shift a little due to the new handling model in F1 2021, and as such it’s necessary to update your car’s settings if you really want to get the most out of the Yas Marina circuit. Bear in mind, this setup is designed for races, not for time trial, and as such there is an emphasis on drivability and tyre management.

In previous renditions of the F1 games, it tended to be a good idea to run a much thicker rear wing than front wing at almost every circuit, as this was beneficial for your traction. However, for Abu Dhabi in F1 2021, that has changed somewhat. Wing settings of 7-8 for your front and rear wings respectively give you the grip you need in sectors one and three, without losing you a whole load of time down the long straights of sector two.

Next up is the transmission, which again is a little different to what you may be used to seeing. At Abu Dhabi, you can afford to run 100% for your on-throttle differential, giving you maximum potential traction without making it too difficult to put the power down. The rear tyre wear you get from this setting isn’t too significant either, so that’s a bonus. As for the off-throttle differential setting, 60% does the trick. 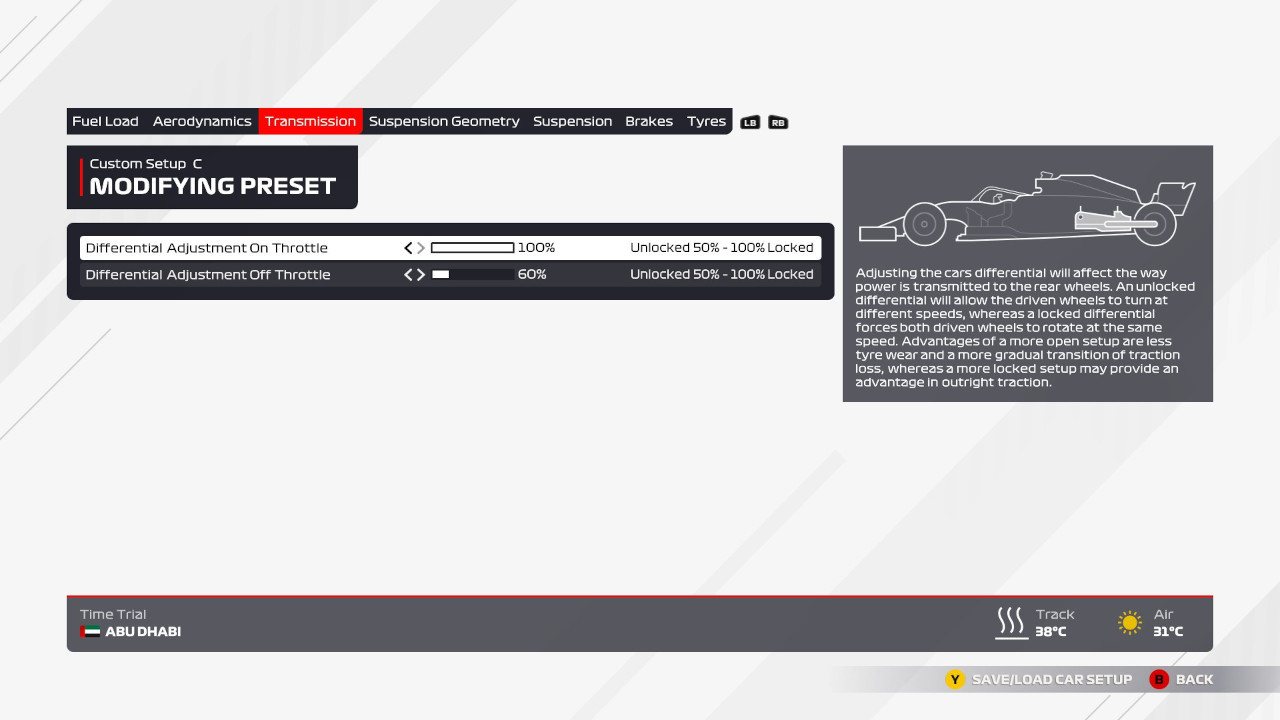 For your front camber setting, it’s a good idea to avoid running too much camber. -2.60 works well, but any more camber than that and you’ll have some issues with front tyre wear. As for the rears, there is less of a problem. -2.00 gives you the grip you need and your tyres can handle it without much trouble. 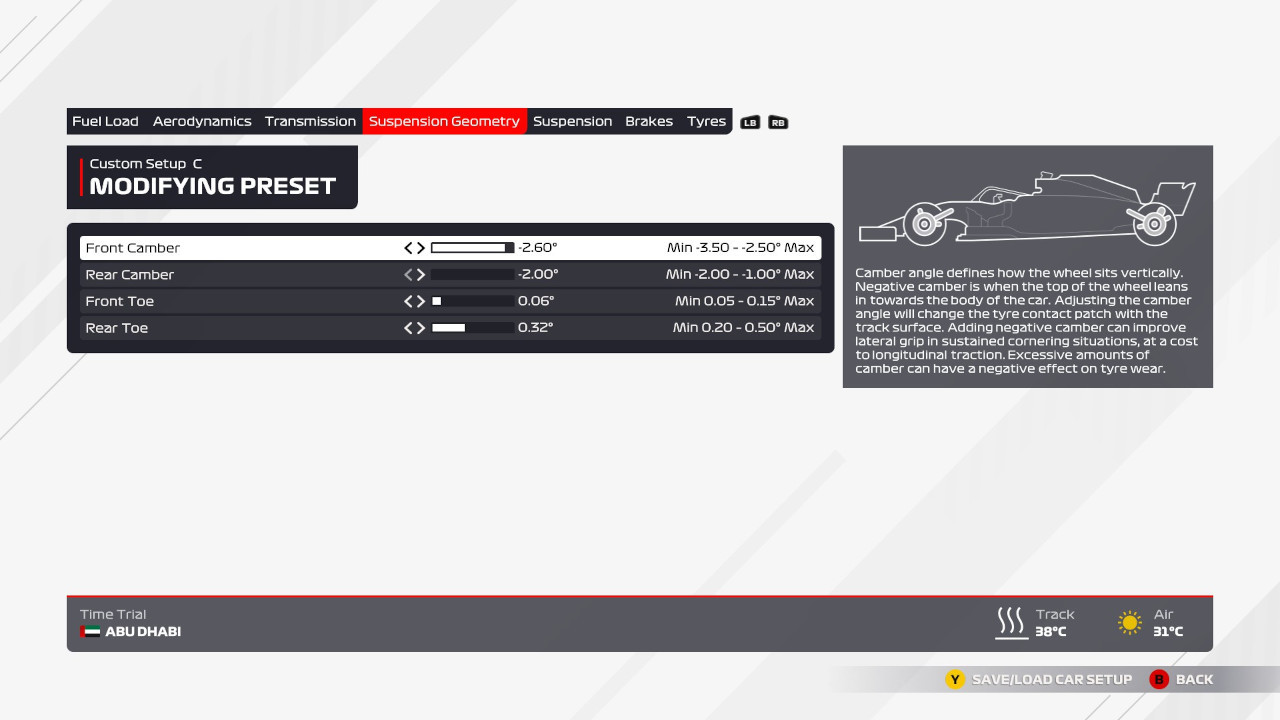 The front and rear toe settings aren’t massively influential here, but they can give you an extra boost when it comes to stability. 0.06 on the fronts and 0.32 on the rears gives you a nice and manageable car.

Then onto the suspension itself, and soft is certainly the name of the game here. Due to all of the lethal kerbs at Abu Dhabi, going as low as 1-1 on the suspension stiffness settings really is viable and moreover useful. Similarly, fairly soft anti-roll bar settings of 6-1 are enough to prevent the car from really wallowing around the corners without making it too skittish. 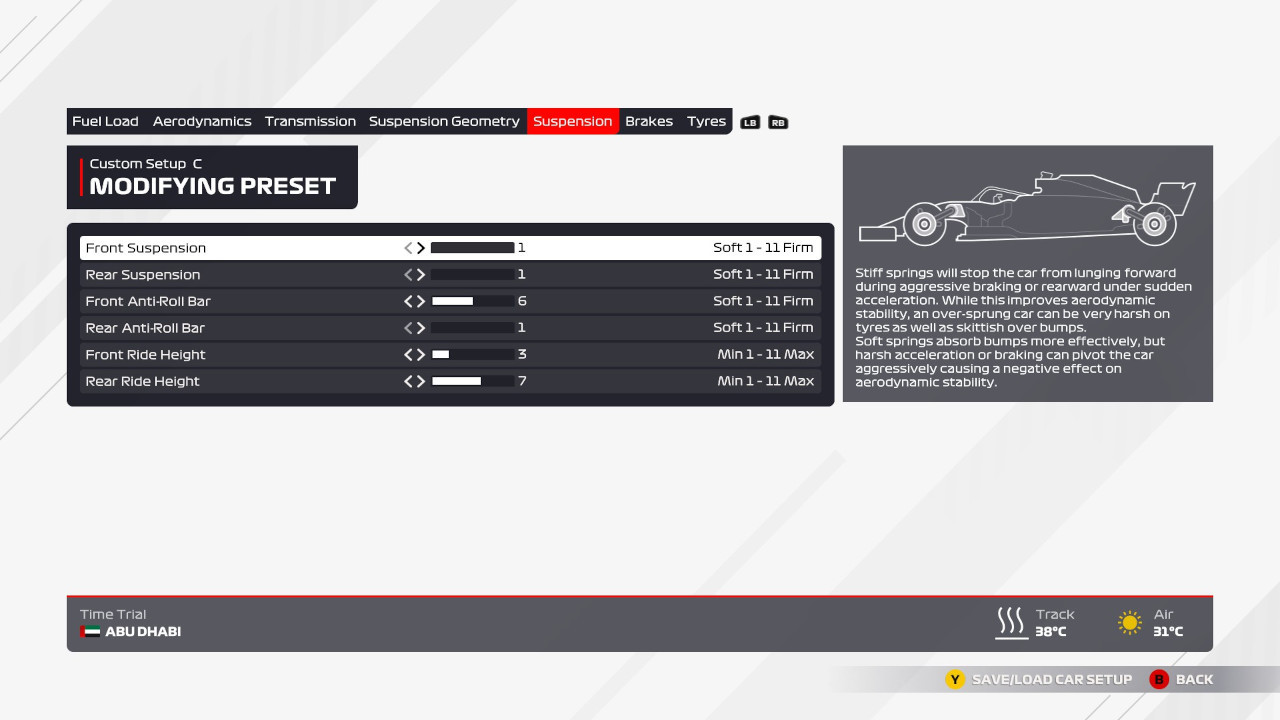 Additionally, running a relatively high ride height of 3-7 gives the car good underbody clearance for when you do hit those kerbs. If you do still find yourself spinning on the kerbs a lot with these settings, try raising the ride height even more.

Things get a little simpler from here on out. For your brake pressure, it’s always a good idea to go with 100% if you can handle it, as this gives you the best possible braking performance. However, feel free to drop this down a few percent if you are struggling with lockups. For your brake bias, a slightly rearward emphasis with a 54% setting helps to avoid front locking into turns seven and eight in particular. 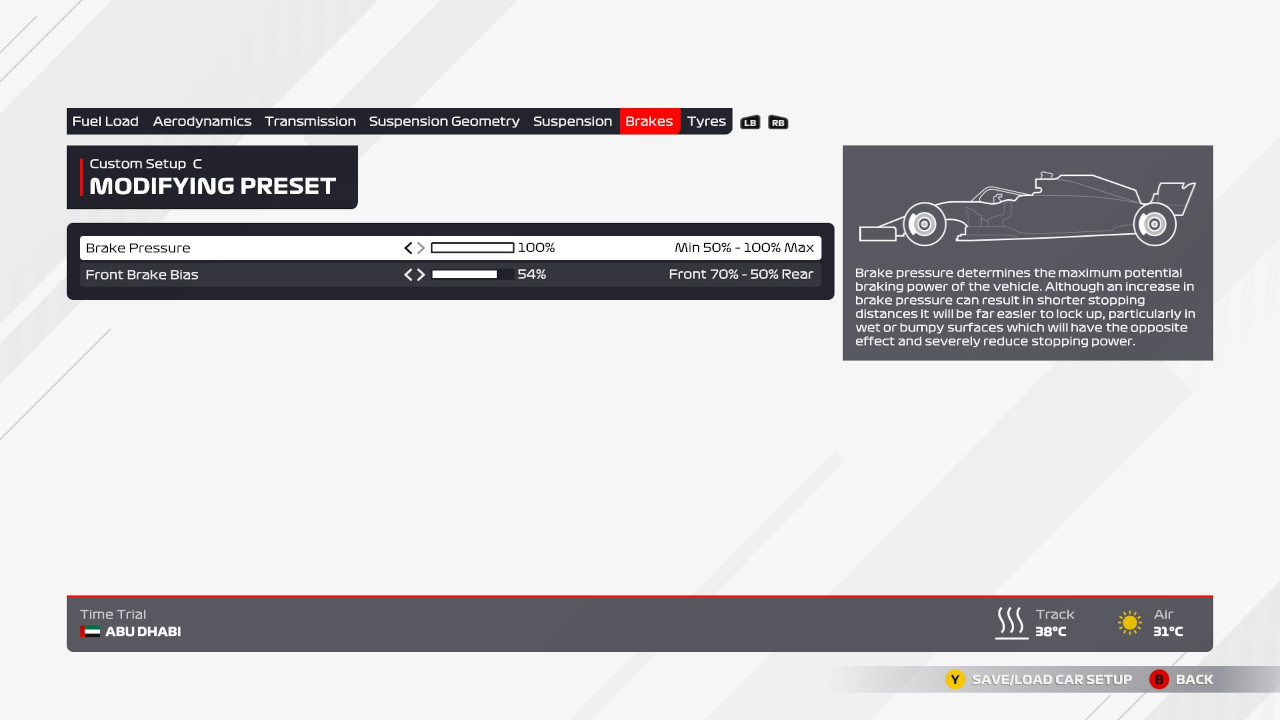 Finally, you have your tyre pressures to sort out. For the front right, which takes the most punishment at Abu Dhabi, go for 22.6psi to help keep temperatures under control. The other tyres are less prone to overheating, so you can afford to pump them up a little more. 23.8psi on the front left and 23.1psi on each of the rears gives you better responsiveness and lower drag, without causing too many temperature troubles. If you find a certain tyre is overheating during the race, try lowering its pressure setting.

How did this setup work for you? Tell us on Twitter at @OverTake_gg or in the comments down below!
Did you like this article? Please click thumb up or thumb down.


Submit
Tell us more
Tags: f1 2021, formula 1, tutorial, circuit
By clicking on one of those buttons you are leaving OverTake.gg