Florian Haasper: Our Hero of the Month

Esports racing's rise to prominence has seen many major events spawn out of it, but perhaps the most important event in a long time is set to be the Esports Racing World Cup, which is taking place very soon. The ERWC will be a multi-platform tournament that will see up to 30 teams compete on iRacing, rFactor 2 and Assetto Corsa Competizione.

This has all been the brainchild of one very enthusiastic esports racing organiser named Florian Haasper, who is spearheading the organisation behind the ERWC - the Virtual Competition Organisation - and also his own esports team, BS+COMPETITION. That's why we are making him Hero of the Month for December.

Racing wasn't Haasper's first love. Back in 2001 whilst studying English, Politics and Journalism at Hamburg University after spending a year studying in Scotland, he went looking for an internship as a sports writer, though instead of racing, he was looking to write about football. So, he applied for a spot at Sport1.de, but he was told that football writers was something they already had in abundance. After trying his luck with basketball and tennis, he was offered the opportunity to write about motorsport. He accepted, even though he didn't know a lot about it at that point.

His time learning and writing about motorsport was during something of a golden age for Germany, as it fell in the midst of Michael Schumacher's dominance in Formula One. Also during that time, BMW had just got back into the sport through being an engine supplier of the Williams team. This worked out very well for Haasper, as being based in Munich meant some strong connections were forged between him and the motorsport division of BMW.

Fast forward a couple of years, Haasper is now part of an agency working with BMW Motorsport's Digital PR. He followed a lot of BMW's successful campaigns in the Nürburgring 24 Hours, World Touring Cars and Formula One, along the way getting tutelage from quite the legend. That legend being the late 40+ year Schnitzer Motorsport leader Karl 'Charly' Lamm. 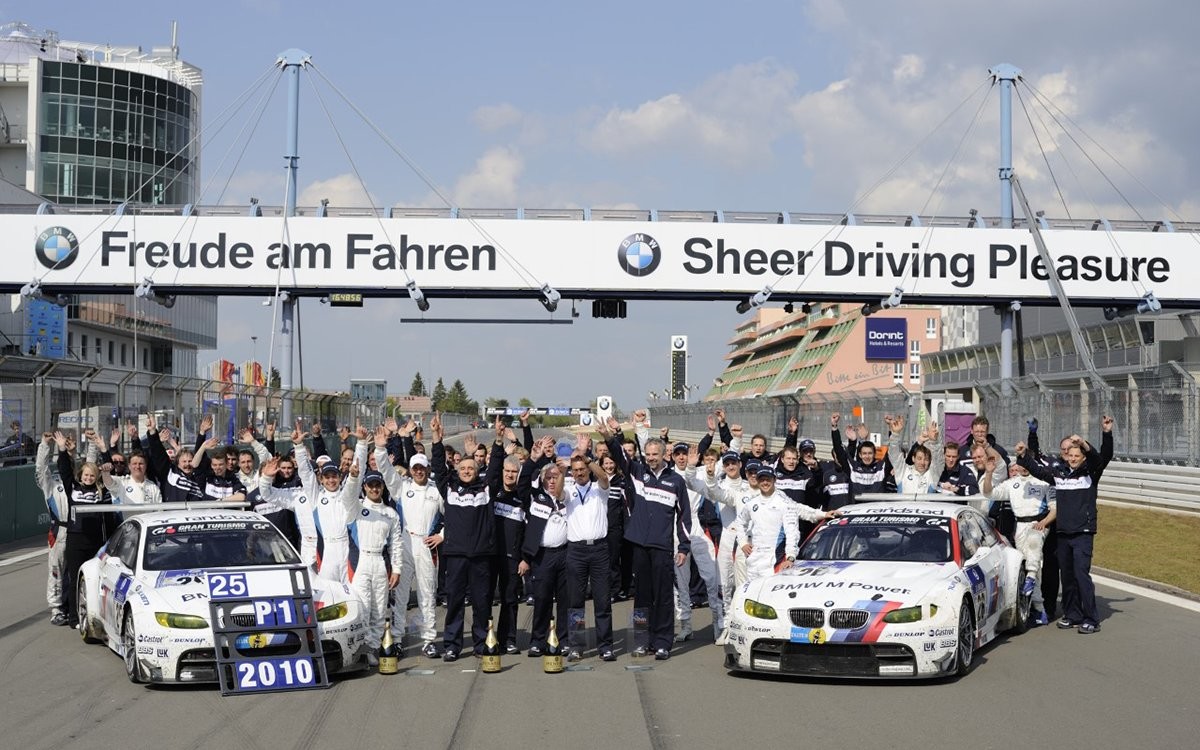 Haasper then became the founder and managing editor of digital marketing and PR agency Bürosüd Plus. He retained his close ties to BMW's motorsport division just as soon as the world of esports racing began gathering steam, and one of the events that spawned was the BMW SIM 120 Cup.

As a result, Florian was inspired to start up his own outfit and thus the striking zebra liveries of BS+COMPETITION blessed the virtual racing world, and he began assembling a team of drivers. Over the years, BS+ have had the likes of Laurin Heinrich, Cem Bölükbaşı and Nils Naujoks all competing for them, as well as factory BMW drivers Phillipp Eng, Bruno Spengler and Beitske Visser.

In that time, BS+ have achieved quite a lot, with perhaps their crowning achievement being their victory in the 2020 Nürburgring 24 hours Special Event on iRacing. It's rare that you won't find a BS+ livery competing in a form of esports racing, as you will find the zebras racing in pretty much any major racing series across all sims, more often than not racing a BMW car. BS+ along with Team Redline, Williams Esports and G2 Esports are the four official BMW SIM Racing Teams, even spearheading their championship winning V10 R-League effort in 2021.

However, esports racing isn't all they're involved in. As Florian put it, they are in the other two major forms of automotive esports, as from 2021, BS+ expanded their efforts into both Rocket League and Trackmania. They acquired not one but two pre-existing teams to compete in both the Rocket League Championship Series and the Women's Car Ball Championship, Godsmilla's Team and European WCBC champions CatJAM respectively, as well as signing Trackmania Open Grand League champion Aurélien 'Dofault' Desplanque and all his teammates from their previous organisation.

Haasper admits he doesn't want to burden any of his players with the heavy weight of expectations. Learning from his friend and mentor Charly Lamm, he decided that the most effective way to bring the best out of everyone representing BS+ is to not pile on the pressure and threaten them with being benched. This is all too common within the RLCS, where two bad matches can result in a team impulsively changing their entire lineup but with a bit of faith, Florian believes in his players and would rather lose that way than win whilst cutting his players out so quickly in an attempt to get a result.

Another exciting thing for BS+COMPETITION is their partnership with real world racing outfit Turner Motorsports, who bore a half Turner half BS+ livery in the 2021 12 hours of Sebring.

Alongside the esports team, Haasper also saw a gap that he felt needed to be filled. That gap being the absence of an all-encompassing promoter and organiser for esports racing which would offer coverage to tournaments and championships. Thus, VCO was born. They immediately hit the ground running after partnering up with the Digital Nürburgring Langstrecken-Serie and the 24h eSports Series, and they went on to form the VCO Grand Slam with four major endurance iRacing Special Events: the Sebring 12 hours, Nürburgring 24 hours, Petit Le Mans and Suzuka 10 hours.

Their best moments though came in their own events. Their first major event was the Cup of Nations back in July 2020 which they ran in partnership with Williams Esports who conceptualised it. In this competition, esports racers represented their countries using many varying types of cars and tracks. However, it was the first season of the VCO ProSIM Series that really put them on the map.

The icing on the cake! 🎂

Another amazing thing VCO have done are the Simmy Awards, which acknowledges the brilliance in all corners of sim racing. Everything from Best Esports Racer, Real-World Pro, Team, Event, Platform, Car, Hardware and more.

The ERWC and the ERL are intended to be the ultimate test in all of esports racing, with the structure reflecting that of more traditional esports like Rocket League and League of Legends, with short, rapid races and a promotion/relegation system. There will also be a prize pool spread across the whole calendar year of $100,000 with half of that handed out in the ERWC, the second rendition of which is intended to be an on-site event in early February 2023.

Much like with having to learn about motorsport when starting out as a reporter, Haasper admits he is still always learning about the industry. With the internet only having been in the process of becoming mainstream when he was starting out, he struggled when the social media revolution took over and changed the way we communicated.

Where there used to be only exclusively the lengthy press releases, now there are short and punchy tweets and memes, something typically alien to people of Florian's age demographic. With that being said, he's incredibly hands on with all the many social media channels these days where you would expect the head to hand it off to someone younger and more tech savvy.

You'll find Florian typically posting across both BS+ and VCO's channels, with the former's channels housing a lot of zebra-based puns. They'll make you groan and roll your eyes but still chuckle. Seeing his infectious enthusiasm come through on all the social media channels, you just can't help but feel that same level of enthusiasm run through yourself.

Our September 2021 Hero of the Month George Morgan earned the opportunity to work with Florian as one of four commentators for the second season of the VCO ProSIM Series and had this to say about him:

Committed to quality, he's a bastion of creativity and passion for sim racing. There aren't many like him in the world of esports. And every conversation I have with him is proactive and engaging.

He's also a great human being as well, and I will always appreciate the support he has given me as well as the community in sim racing and esports.

Currently, Haasper's only real commitment outside of racing and esports is his family. He has three children with his longtime partner, the oldest of whom is 15 while the youngest is 10, and yes he's very much tried to get them into esports and gaming but to no avail. Concerning the games he plays, he's quite active on both FIFA and Rocket League.

Also as far as racing himself, he's really only done the odd big race for fun. Specifically, he took part in Jimmy Broadbent's 23 hours of Zolder charity event last November. He did remarkably well for someone of his sim racing experience, having only spun once but did end up getting punted off.

First ever stint on @iRacing ✅

A spin and being punted by the @RaceSpotTV car ✅

A great amount of money raised by @JimmyBroadbent for @MindCharity ✅

Thank you to @BScompetition for your patience… I'll be back pic.twitter.com/NsgjxpQFGE

Florian Haasper is proof that to be a leader doesn't mean you have to know more than anybody else, instead it's to make people feel valued and share their enthusiasm. With people like him at the forefront of the industry, the future of esports racing looks incredibly bright!

Are there any personalities in esports racing you would like to nominate for the next edition of Hero of the Month? Tell us on Twitter at @OverTake_gg or in the comments down below!
Did you like this article? Please click thumb up or thumb down.


Submit
Tell us more
Tags: hero of the month, portrait, esports
By clicking on one of those buttons you are leaving OverTake.gg