Bergeron becomes a double world champion for winning iRacing's World of Outlaws World Championship a second time and earns $10,000.
Canadian esports racer Alex Bergeron has successfully defended his title as the reigning champion of iRacing's World of Outlaws NOS Energy Drink Sprint Car World Championship. The new accomplishment did not come easy. The competition was fierce, Bergeron struggled with connection problems in round four and had to deal with external pressure.

As he revealed in an interview with speedsport, he faced high expectations before going into the season as defending champion: "Everyone's looking at us; we just have to go out and do what we know we can each race."

But Bergeron was able to withstand all pressure. Especially his victory in round 8 at Eldora Speedway was impressive. From a top position in the qualifier, to winning the heat race, to leading in all 35 laps of the main event and claiming his third victory in the series – Bergeron was always ahead of his opponents.

Round 10 concluded the 2020 iRacing World of Outlaws NOS Energy Drink Sprint Car World Championship. The final race took place at the Dirt Track at Charlotte on Monday. Bergeron entered the last circuit with a lead of 34 points in the standings. Only one match was left to secure his next championship title. Unfortunately for him, he once again suffered from connection issues and trailed behind, finishing sixth.

Dylan Houser won the final round, followed by Dillon Semmelmann (+2.396) and Kendal Tucker (+3.394). Houser already crossed Bergeron's plans earlier: While Bergeron won the first two rounds of the series, Houser took an end to Bergeron's winning streak and claimed the victory at Fairbury.

Yet, Bergeron's total score was enough to get him the crown again. As sports broadcaster Justin Prince summarized in his tweets, Bergeron won three out of ten races, achieved six top-5 placements and led 151 laps. Bergeron received $10,000 prize money for his second championship. 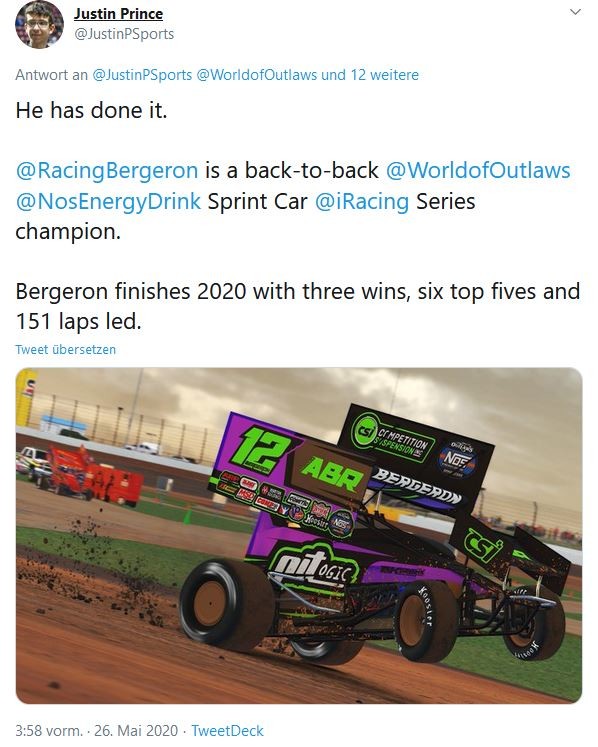 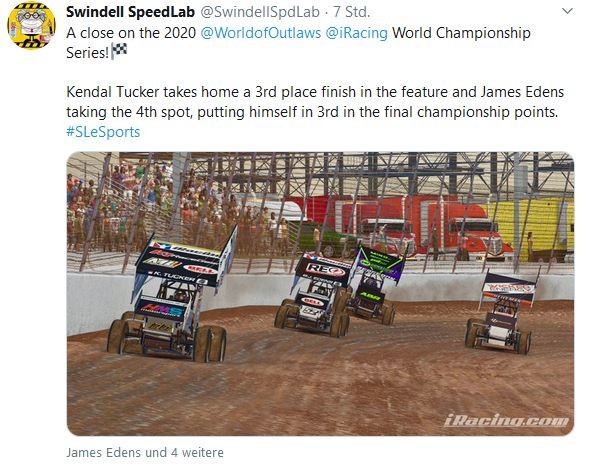 More than a simple tournament victory

Before races, Bergeron practiced laps with the drivers, showed them the best lines and how to be fast in the simulation, as he explained in an interview with World of Outlaws.

You can watch the entire final race on the official iRacing YouTube channel.