The most important partners of esports racing

Esports Explained
Reading time: 4 minutes
Partnerships are an essential part of esports. Here are four prominent examples that shape the esports racing scene.
Esports is a thriving market. One of the foundations of its success are partnerships. Well-known companies like DHL, KitKat and Pringles are commonly involved in big events in Counter-Strike, League of Legends and other disciplines. As such partnerships are indicative of any esports' growth, it is worthwhile having a look into sponorships and alliances in esports racing.

The Bull and the Gamers

Red Bull’s investment in growing sports is well-known. The Austria-based company is involved in everything from airplane races to Formula 1. So, it was no real surprise to see the announcement of a major esports racing partnership between Red Bull and G2 in March 2020. The team formerly known as FA Racing G2, which was co-founded by racing legend Fernando Alonso, has become Red Bull Racing Esports. 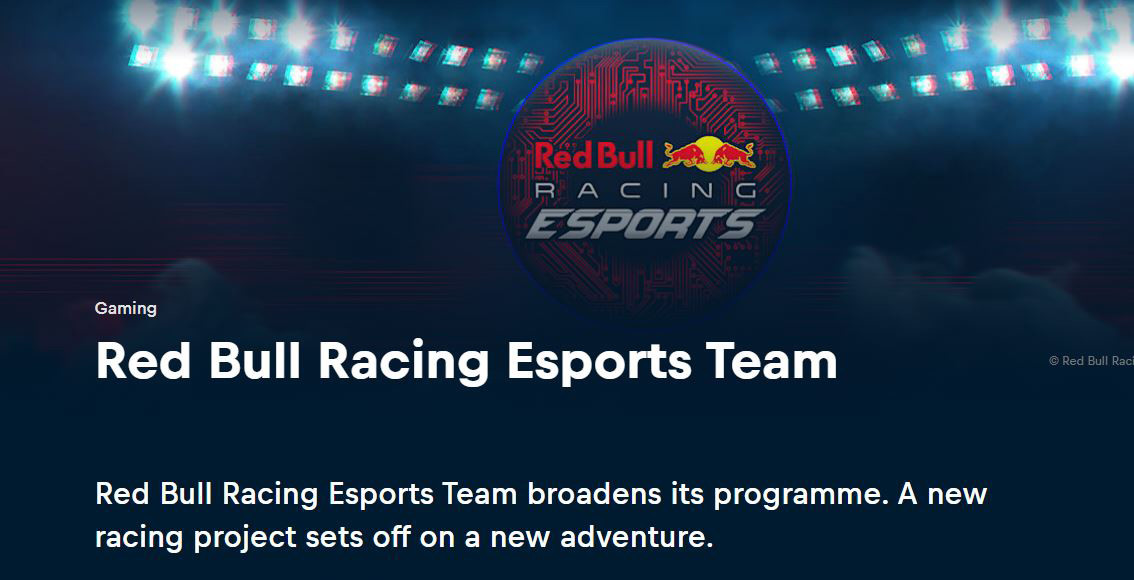 Although the collaboration was at first intended to only cover F1 esports, the two partners soon began to recruit all sorts of sim racers for different games. Those included pros like iRacing veterans Joni Törmälä and Sebastian Job. Head of Red Bull racing Esports Danny Engels said shortly after the announcement:

“The accessibility of sim racing offers a new entrance into motorsports for both experienced racing lovers and new fans. The line-up of drivers representing the Red Bull Racing Esports Team is the most successful group in the entire sim racing space and will fight for World Championships across multiple games and platforms.”

Looking back, the partnership turned out to be a success story in every aspect. The team has since won tournaments like the F1 2019 Constructors’ Championship and the Forza`Invitational 2019. One of their drivers, Sebastian Job, is currently second in the standings of the Porsche Tag Heuer Esports Supercup, the arguably most anticipated and contested sim racing event of the year.

Veloce gets its Shadow

At the end of May 2020 Veloce Esports and the McLaren esports team (McLaren Shadow) announced their cooperation. 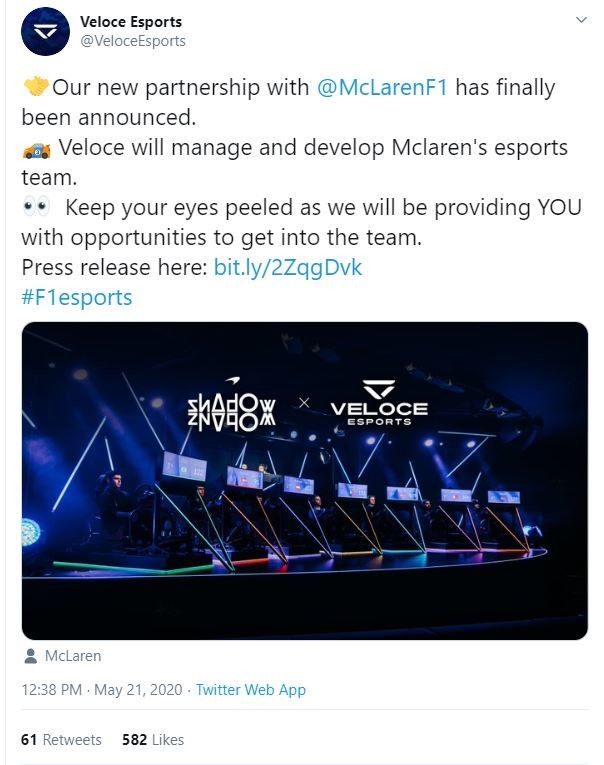 While Veloce was mainly brought in to help support the structural requirements for McLaren, the two also joined forces to build new ways to foster young talent. Through academy-like training and an open application process the partnership is most likely looking to replicate Red Bull’s success in esports racing. The official press release read:

McLaren and Veloce will work together to create an academy for the world’s most promising racing gamers and establish a ‘staircase of talent’ – with the ultimate goal being a seat in the McLaren esports team. By joining forces, the partnership promises to become a leading light in this burgeoning industry.

As the alliance is relatively new, there haven't been many notable results yet. Still, this cooperation looks very promising and we will surely see them becoming a new shining beacon of esports racing.

May 10, 2018, marked a new chapter in the world of esports racing. With the partnership of Williams, the first major investor from mainstream racing began to pursue its chances in the market. They partnered with the Spanish sim racing team Jim Racing to make their entry into esports. Previously eight Formula 1 teams had announced their teams to compete in the virtual F1 eSports Pro Series. But Williams acquired a knowledgeable partner with the Spanish company.

As Head Of Jim Racing, Javier Guerra said after the announcement:

eSports has grown dramatically in recent years to become a huge global industry, so we’re eager to take on the challenge of growing sim racing’s place in the eSports world. We’re looking forward to developing our roster of drivers, offering a select number the incredible chance to become part of the Williams family.

Gfinity's formula for a great production

Recently one of the biggest esports companies in the world, Gfinity, and F1 announced the continuation of their cooperation that originated in 2017.

The partnership began as a way to introduce the F1 game by Codemasters to the world of esports. Gfinity has been the main organizer of live events for F1 and stages most of them at their very own Gfinity Arena in London.

Come 2022, Gfinity will also be responsible for the F1 Pro Draft and the Pro Series. Looking at the number of viewers at virtual F1 events, it is clear that this cooperation has come to stay. The name of Formula 1 combined with the expertise of Gfinity seems to have a bright future ahead of them.

For most companies having an experienced org that knows its way around esports racing seems to be the main reason for partnerships. Teams like McLaren search for a way to enter the scene and establish themselves as main competitors before others run the circuit.

At the same time, esports racing is an excellent way to reach out for audiences that are not interested in traditional racing and media anymore. Increasing brand awareness is one of the major motivations for the big players to enter the esports game.

Most importantly, however, it helps racing as esports. The growth of the industry is heavily dependent on the interest of all sorts of viewers. To be as big as the prime players someday, racing esports must consistently deliver professional productions as well as gain the acceptance of a broader mainstream audience. Partnerships with companies like Red Bull are worth more than just the money in that regard.

There are many more partnerships and in the growing scene many more will form in the future.
Did you like this article? Please click thumb up or thumb down.


Submit
Tell us more
Tags: formula 1, formula 1, esports, esports, report, report
By clicking on one of those buttons you are leaving OverTake.gg