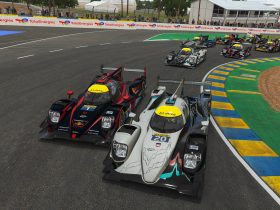 After defeating McLaren and Team Redline in the semis, BMW and Aston Martin were primed to duel it out at Silverstone and Yas Marina for the V10 R-League Season 2 title.

Over the last one-and-a-half months, the V10 R-League whittled down its competitors to the point that only two teams were left standing. In the group stages of the competition, Team Redline topped group A, while McLaren Shadow emerged victorious from group B. Despite these early season performances, neither of these teams battled it out in the final round to claim £32,500 of the £120,000 overall prize pool.

The reason that neither Redline nor McLaren made it to the final is that they were beaten in the semi-finals by BMW Motorsport SIM Racing Team and Aston Martin Cognizant respectively. The finals were to be a direct showdown between these two teams, who finished second in each of their groups, but who upset the favourites in the semi-final rounds.

On 24 May at 10pm CET, the two teams began their duel. Aston Martin were represented by Daniele Haddad, Shanaka Clay, and Lucas Blakeley, all of whom have experience driving in the  F1 Esports Pro Series.. Lining up against them was a BMW roster which included  Kevin Siggy, Michael Romanidis, and Alen Terzic.

Silverstone and Yas Marina in Abu Dhabi were the two circuits used for the finals, which consisted of a relay race and a sprint race at each of these two tracks. Initially, it looked good for Aston Martin. Daniele Haddad managed to pass Kevin Siggy during the opening stint of the first relay race. However, excitement quickly turned to disappointment for the team in green, when Lucas Blakeley jumped the gun and left the pit lane two-thousandths of a second too early. This earned the team a three-second time penalty which they were unable to compensate for on track.

To make matters worse for Aston, BMW drivers Siggy and Romanidis managed a one-two finish in the Silverstone sprint race, putting the German outfit up 2-0 with only two races left to run. In the next race, the relay at Abu Dhabi, the fortunes shifted against BMW. They took the win on track, but track limits violations netted them a post-race penalty, and so a lifeline was gifted to Aston Martin.

We are @V10RLeague CHAMPIONS. A champagne shower awaits us.🚿🍾

We beat @AMCF1esports 2️⃣:1️⃣ in the GRAND FINAL. Great match, Aston Martin Esports Team! You were a worthy rival that luckily we were able to take down.🤝#BMWSIM #WeAreNotPlaying pic.twitter.com/LbIseZ29Qv

Aston had been in this position before. They were 2-1 down, and they needed to score a big points total in the final sprint race to take a tie-break victory over BMW. This is exactly what they had done a few days prior against a  James Baldwin led McLaren Shadow. A collision between Romanidis and Haddad in turn one immediately made a comeback victory seem unlikely, as this allowed Kevin Siggy to drive clear at the front. The Slovenian never looked back, taking the win from Shanaka Clay to guarantee the V10 R-League season two title for BMW.

What do you think about the unconventional format of the V10 R-League? Tell us on Twitter at @OverTake_gg or in the comments down below!