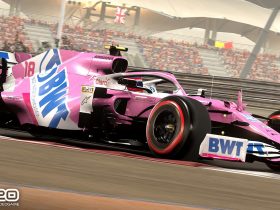 Although Red Bull driver Alex Albon crossed the finishing line first with a +0.413 second gap to Russell, a penalty cost him the victory. Therefore, Russell who was right behind him, moved up to snatch the trophy.

It wasn’t only F1 racers who took part in the event – there were also several esports racers and streamers among the participants’ list. One of them was FIFA content creator Jack ‘Pie’ McDermott who drove the race with a controller instead of a fully equipped sim rig. He delivered a solid performance nonetheless, finishing in 14th place.

Esports racing icon Jimmy Broadbent attended the race as well, but unfortunately faced some technical issues. As his wheel caused problems throughout the evening, and he finished in the lower end of the standings in 12th place.

– Awesome quali from @JaaamesBaldwin for 4th
– Wheel doesn’t work as I pull away. Last place.
– Spend half a lap resetting the wheel
– Wheel settings is all wrong
– Fix wheel whilst pitting
– Finish within 3 seconds of 11th

On to the next one! #VirtualGP

Racing for a good cause

The British GP at Silverstone was the second of three special F1 events. The Virtual GP series is a charity tournament where esports racers and traditional motorsports drivers battle each other to win a share of a $100,000 charity prize pot to donate for their nominated causes.

Enzo Fittipaldi, grandson of F1 legend Emerson Fittipaldi, was able to win the first Virtual GP in Austria. (Note: Russell did not participate in this event). The third and final GP will take place in Brazil next Sunday, February 14.

Who do you want to see racing in the Virtual Brazil GP? Tell us on Twitter at @overtake_gg or in the comments down below!