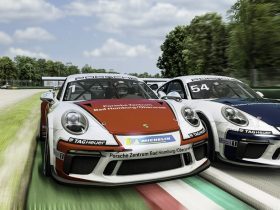 The world championship in GT Sport is confirmed to return in 2021. Polyphony Digital teased that the race schedule will be revealed soon.

The video game developer Polyphony Digital has confirmed the return of the FIA GT Championship series for 2021. The company behind the Gran Turismo franchise posted a short announcement on their homepage on Sunday. No further details are available so far. The developer stated that updates on the race schedule and events will be provided soon.

How does the FIA GT Championship series work?

The 2021 edition will be the fourth instalment of the Gran Turismo World Cup and is played on the most recent title of the franchise, GT Sport. Competitors have the chance to earn points in two categories of the tournament – the Nations Cup and the Manufacturer Series.

Traditionally, the event kicks off with the World Tour. There, the top racers from the previous season compete against each other and the winner of the World Tour receives a ticket to the World Final.

Afterwards, the main Online Series takes place which is divided into four stages, each consisting of ten rounds. Any player from across the globe can try to make it through the qualifiers. After each of these ten rounds, another World Tour event is hosted, featuring the top drivers from each stage.

Then different regional Live Events start, and the top contenders from each region advance to the World Finals. In this final stage, the best of the best compete for the title and prizes that come with the status as GT Sport World Champion.

The pandemic did not drift past the world of competitive GT Sport either, as most live events and the World Finals could not take place in their planned venues. The organizer therefore switched to exclusively online events.

Nonetheless, the drivers gave their best and delivered strong performances. Japanese esports racer Takuma Miyazono managed to claim the trophy in the Nations Cup in December 2020. Only three points separated him from runner-up Valerio Gallo. You can read more about the finals in the article below.

Are you going to compete in the upcoming FIA GT Championships? Tell us on Twitter at @overtake_gg!