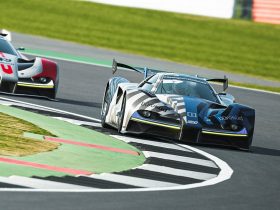 More sustainability in racing: A look at World eX

With the creation of the Olympic Virtual Series for Japan 2021, GT Sport is set to become an Olympic event.

For the first time, esports racing is coming to the Olympics! Polyphony Digital’s Gran Turismo Sport has been selected as one of five virtual sports which will comprise the all-new Olympic Virtual Series. This event will not be a part of the regular GT Sport competitive calendar. Instead, an FIA accredited standalone event, the FIA Gran Turismo Cup will take place. This will include qualifiers and world finals later this year.

How did this happen?

The International Olympic Committee (IOC) has partnered with five different International Sports Federations to bring about the first ever Olympic Virtual Series. Along with the governing bodies for sailing, cycling, rowing and baseball, the FIA was chosen to bring a form of virtual motorsports to the Olympic games. The other games featured will be Zwift, a virtual cycling and running game, eBaseball Powerful Pro Baseball 2020, Virtual Regatta and a not yet specified rowing title.

Polyphony Digital had a pre-existing relationship with the FIA, as GT Sport esports racing competitions over the last years have been FIA accredited. As such, it makes sense that the FIA would select Gran Turismo as its game of choice. Esports racing will be represented on a thoroughly global stage.

Gran Turismo will be featured in an Olympic competition this year https://t.co/jQgsg2rv8o pic.twitter.com/WoQsgQM4Gy

According to Polyphony, the new Olympic Virtual Series is intended to “encourage development of physical and non-physical virtual forms of sports”. The president of the IOC, Thomas Bach, highlighted the “special focus on youth” which this move is an aspect of. In a week in which the European Super League attempted to make football more like Fortnite, the level of attention being paid by traditional sports to the younger generations and competitive esports is evidently rising.

The tournament itself will feature an open qualification system, in which any player over the age of 18 will be eligible to participate. In a select few countries, the minimum age is 21. The qualifying will be staged on 13 May as a global time-trial challenge. This challenge will run for ten days until 23 May, at which point the fastest 16 players will be invited to the online finals event, which is due to take place on 23 June.

Some things are still unclear about the nature of the competition. For instance, it is not yet known whether medals or other prizes will be offered to the highest placed finalists. Nevertheless, this is an exciting and validating new development for the world of esports and especially for esports racing.

What do you think of esports racing at the Olympics? Tell us on Twitter at @OverTake_gg or in the comments down below!