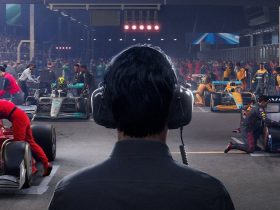 Milestone has revealed a raft of brand new information about the upcoming Hot Wheels Unleashed.

Hot Wheels is a franchise that has been a part of the lives of so many children and adults ever since its initial creation way back in 1968. Video game developers Milestone are in the process of creating a new Hot Wheels game known as Hot Wheels Unleashed, which is set to release in September this year. On 8 April, the first gameplay footage was released in the form of a new trailer. Alongside this was a developer showcase, which went into greater depth in its discussion of features in the game itself.

Among the first things you notice upon watching the new trailers is the fact that the cars are not scaled up at all. Players race in tiny cars in a massive world, with enormous structures surrounding the racetracks to give the game a proper Hot Wheels feel. At one point, there is even a massive bright-blue spider, so arachnophobes beware!

As for the racing itself, the concept is relatively simple. There are no items or Mario Kart style powerups. Rather, there are boost pads around the circuits for cars to drive across. There is also a bar of what appears to be some sort of nitrous boost which drivers can use whenever they please. This bar slowly recharges as the race goes on, so tactical use of this tool will no doubt be critical to success.

Hot Wheels: Unleashed races onto the scene with this first-look gameplay trailer! 🏎💨 pic.twitter.com/Y5YqsIxjUl

Another important skill to master will be that of the drift. Cars drifting around the majority of corners in the trailer suggest that this will be a large part of the gameplay. Collisions are present, and while no lasting damage is done, they can disrupt a car pretty significantly. The trailer also shows off a shortcut which can be taken at one of the tracks with the use of some boost, and there will no doubt be more of these to find at other circuits as well.

Six of the cars in the game were also revealed. The gameplay trailer features the Rip Rod, Sharkruiser, Dragon Blaster, Night Shifter, Twin Mill and Rodger Dodger models racing one another. Each car will have different attributes, and some models are more common than others. A certain level of customisation will also be present, including visual skins. These are but a fraction of the overall launch number of cars, and Milestone has confirmed that they will continue to add more cars through DLC and free updates to the game.

Several other aspects of the game were announced in the developer showcase, including a track editor mode, a career mode with boss battles and both online and local multiplayer. The game will release on PlayStation 5, PlayStation 4, Xbox Series X and S, Xbox One, Nintendo Switch and PC, so no matter your console of choice you’ll be able to pick it up!

Are you excited about the new Hot Wheels game? Tell us on Twitter at @OverTake_gg or in the comments down below!