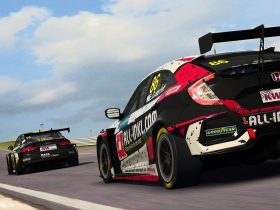 A new IndyCar game is in the pipeline by Motorsport Games, and they will completely overhaul the NASCAR Heat franchise.

Publisher Motorsport Games is said to be completely reworking the 2021 iteration of their NASCAR Heat series, as well as creating a new title for IndyCar. The gaming division of the media and technology company Motorsport Network has cooperated with American developer studio 704Games in the past for their NASCAR Heat franchise. After producing eight titles of the simcade which portrays the latest annual NASCAR season, the publisher now wants to rebuild the game.

.@MSportGames will drop the ‘NASCAR Heat’ name of the NASCAR video game franchise in ’21/start fresh with a new title as part of a start-from-scratch rebuild of the game’s software, per CEO Dmitry Kozko.

Motorsport journalist Adam Stern from Sports Business Journal shared on Twitter that the company allegedly will no longer continue their naming system. They will instead pimp up the successor with a new livery. Although the next game will not be called NASCAR 6, the new title is not yet known. Motorsport Games is also said to be completely reworking the game’s software from scratch.

Stern further revealed that the publisher CEO Dmitry Kozko is in talks to create a brand-new IndyCar game. While the NASCAR format features stock cars that race on oval tracks, IndyCar takes a different route. The class is a North American open-wheel racing series with cars that at first glance resemble classic Formula 1 cars. However, since IndyCar takes place on oval tracks, the drivers are able to achieve far higher speeds.

So far, there is no dedicated simulation or simcade that exclusively focuses on IndyCar. While fans can race in the series in iRacing or RaceRoom, the community is still missing an entire game.

Are you excited about the upcoming games? Tell us your opinion on Twitter!