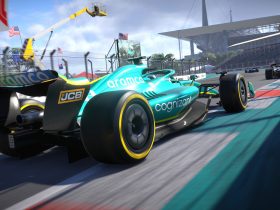 A tweet by the company suggests the well-selling Logitech G29 will get a successor.

Is the next generation of Logitech racing hardware coming to the market? Logitech G posted a close-up picture of what looks like the center of a steering wheel on their Twitter account. The post says: “Get to the grid,” and teases August 5 as a possible reveal date.

Given the fact that a new console generation will be released at the end of the year, the arrival of a new wheel series seems very likely.

A broad discussion about new possible features has emerged under the teaser tweet. Many fans hope Logitech releases a single wheel model which will be compatible across all gaming platforms. Other topics of the discussion are the force-feedback system, handling, and desired improvements of the pedals.

the funny thing is logitech wheels break more world records than any other wheel. top end wheels dont make you any faster. most of the the time they slow you down. i know ive used them.

The Swiss company has been focusing on entry-level racing hardware throughout the last years. Their flagship wheels G25, G27 and G29 rank among the best esport racing wheels in lower pricing segments. Each Logitech wheel comes with a set of pedals.

The latest models G29 and G920 were released in 2015 and are compatible with PlayStation 4 and Xbox One respectively. However, a lot of racers consider the models to be outdated. Whether that is true, you can find out in our hardware review of the wheel:

We are awaiting updates on the new hardware to be released on Wednesday, August 5.