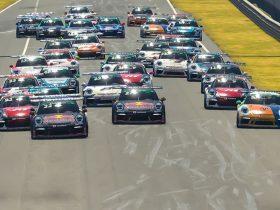 How does the Porsche Esports Supercup work?

Opmeer and Tonizza win in F1 Esports series. But not without resistance.

The first event of the F1 Esports series 2020 is halfway through, with only the Chinese Gran Prix waiting for us today. Yet the first two races have already produced some immaculate racing.

On the opening race the field took to the Bahrain circuit. Almost immediately, last year’s champion David Tonizza made contact and was forced to box right after the opening lap. From there on Tonizza didn’t manage to recover and drove home a horrid last place finish.

At the front, the Alfa Romeo Racing Orlen Esports team of Jarno Opmeer and Daniel Bereznay had their hands full of last year’s constructors champion Joni Törmälä. The three were swapping places for most of the race and battled each other for position in fierce fights. The race ended with the two Alfa racers in a stalemate for the last lap. In the end, Opmeer brought home the victory with Bereznay second and Red Bull’s Marcel Kiefer third.

Race two introduced F1 Esports to the street circuit of Hanoi. F1 2020 features the Asian circuit for the first time and it proved to be an interesting tack.

This time, the winner of the previous race Jarno Opmeer took pole. Champ Tonizza performed better and was set up for success as well with a solid second place starting position.

Renaults own Nicolas Longuet was the surely the surprise of the day. The Frenchman had only appeared twice in regular esports races before, yet proved to be a dangerous prospect. Longuet led the race for a lot of laps and defended miraculously against the attemps of his attackers. He competed for the win until the last lap, where his position got pipped to the hunting Tonizza.

Last lap overtakes for the lead are our favourite kind of overtakes 😍@David_Tonizza wrestled the lead from @NicolasLonguet to take his first win of 2020!#F1Esports 🎮 #F1 pic.twitter.com/k7PusH1eK3

With this win, Tonizza was able to at least provide damage control. Nevertheless, it was not the ideal start for the Italian on his mission of defending his title.

After a tough opening race, reigning champion @David_Tonizza bounces back with a daring last-lap overtake to win!#F1Esports 🎮 #F1 pic.twitter.com/snMYlmJFYi

The end of day one leaves the field like this:

If you want to stay up to date with the F1 Esports series follow us at @overtake_gg!