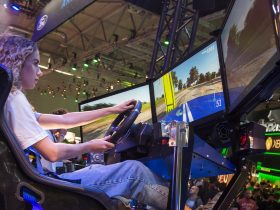 OverTake will help select the winners of the first SIMMY AWARDS by Virtual Competition Organisation.

Virtual Competition Organisation (VCO) makes sure that the key figures of the sim racing scene can look forward to some extra-special Christmas presents: On Friday they announced the very first SIMMY Awards. They will be presented to their winners on December 26. In ten categories, the respective nominee will be awarded the SIMMY trophy, which was designed specifically for this occasion. To top it all off, VCO will also throw in €1,000 per category that will be donated to an organization of the respective winner’s choice.

OverTake is part of the SIMMY-jury

The nominees in the ten categories will be determined freely by the sim racing community – you can submit your own vote before November 25 right here. The selection will be narrowed down to the three entities with the most entries who will then enter the final vote from November 26 to December 6. In the last phase, half of the vote will be decided by the SIMMY AWARDS’ jury, consisting of seven esports racing experts – including a representative from OverTake. The other half will once more be determined by the community. In each category, an overall winner will be crowned and announced at the award’s ceremony broadcast on December 26.

The VCO SIMMY AWARDS 2020 will be presented in the following categories:

Virtual Competition Organisation (VCO) is a German brand connecting different stakeholders in esports with a focus on broad media presence and professionalism. With its international network, VCO conceptualizes and implements esports projects of all kinds in the ever-growing sector.

We have a winner! Congratulations to @HanyAlsabti and @r8gesports on their victory in the main race! 🏆🏆🏆

What a gripping start into the @rFactor2 GT Pro Series powered by VCO. We are ready for more! #vcoesports #gtproseries pic.twitter.com/SzmU0cyCT8

Florian Haasper, CEO of Virtual Competition Organisation, explained the concept of the SIMMY AWARDS in detail:

The VCO SIMMY AWARDS is the culmination of an exciting year for Esports racing. The awards allow us to recognize the performances and extraordinary achievements of renowned and less-known esports racing participants across all sim platforms. I would like to say a big thank you to the members of the jury, whose expertise gives the ‘SIMMY’ even greater significance. The fact that the awards will also help good causes means we are rounding off this special competition with a worthy awards ceremony at Christmas.

Who do you think deserves a SIMMY AWARD? Tell us on Twitter at @overtake_gg or in the comments down below!