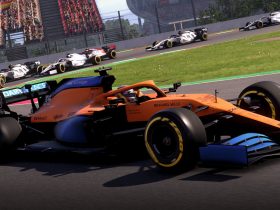 Want to test upcoming racing games before their release? The Steam Game Festival Autumn Edition offers you a test drive.

The Steam Game Festival Autumn Edition takes place from October 7 – 13. Fans can test and watch demos of upcoming games, as well as talk with the development teams. The event’s spotlight is on games that will be released within the next six months – so there might be a chance to get a glimpse of upcoming racing titles.

It’s not only players who can benefit from this event – it is also a great opportunity for developers to receive feedback, as well as promote their games and create hype to get the community excited.

From October 7-13, play *hundreds* of demos for upcoming games for free from the comfort of your cozy home. 🍂

What racing games are waiting to be tested?

The Autumn Edition is the fourth installment of the event, as the first Festival took place in December 2019. There are always hundreds of free demos available on Steam. But since there is no official list of games that can be played, there might be some gems waiting for fans on the racing games market.

Electronic Arts recently announced a remaster of Need for Speed: Hot Pursuit after months of rumors and speculation. The release date for the PC version is November 6, so players might have the chance to go for an early test drive at the festival.

Speaking of test drives: KT Racing are currently working on their next title Test Drive Unlimited Solar Crown. There is no official release date yet, so it could not fall into the category of being “released within the next six months”. But who knows, it might be part of the festival play-list. On top of that, there might be interesting indie racing games waiting.

We’ve worked with @sumichu, @andylaso, @spikevegeta and @oatsngoats to bring you hours of gameplay & commentary on titles featured in the Steam Game Festival!