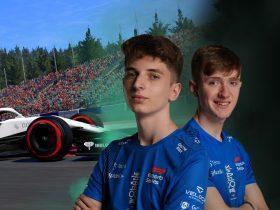 F1 Esports Challengers: What you Need to Know

One of the leading F1 game leagues featuring the top esports drivers have had to prematurely end their season two races early.

When it comes to where the best drivers from F1 Esports compete outside of the Pro Championship, the vast majority compete in the top PC tier of Premier Sim Gaming Leagues. Wednesday evenings were filled with racing action on the F1 game, and the likes of Jarno Opmeer, Brendon Leigh and Frederik Rasmussen would battle it out for top honours.

Season 31 of PSGL was the fourth with top PC tier action, and it began in early July for what was meant to be a ten race season before the F1 Esports season began. Unfortunately though, after the most recent round on 24 August, the decision was taken to end the season early.

The reason for the abrupt halt was the fact that the F1 Esports drivers have access to a different version of the game. This version is referred to as the ‘esports build’.

What Is The Esports Build?

This isn’t the first time it has come up. During Season 29, the news broke out that the Pro Championship drivers were having to juggle two different builds of the game, one being intended for the upcoming F1 Esports season. Plenty of negative reaction resulted, with many calling for the build to be released immediately so the esports drivers didn’t have to switch between both.

There are still plenty of grievances from PSGL’s side, and some fans believe this is an attempt by the F1 Esports organisers to undermine league racing. However there have also been issues regarding FPS, which has also caused an unfair advantage.

The community has discovered that, the lower the frame rate, the less difficulty drivers have when riding kerbs. This is due to the lower response time for a car to react to them. Therefore, drivers running a low FPS can get away with mounting the kerbs and cutting down their lap times drastically.

This exploit was rectified, but only on the esports build. The same is also true with the online formation lap glitch which caused PSGL and other leagues to turn off the formation lap. As a result, it would render league racing for the F1 Esports drivers obsolete, as they would be practicing on an outdated version of the game. Hence, the season was called off early.

As a result of the season ending, new Veloce signing Lucas Blakeley has become the first driver to displace the dominant Jarno Opmeer in PSGL’s top PC tier. The Scot and his McLaren teammate Bari Boroumand had an immensely close title battle throughout the season, and they entered what would become the final round at Monza separated by just one point.

It looked like Boroumand would extend his lead but a coming together on the last lap with Red Bull’s Frederik Rasmussen left Blakeley to take the victory. Even if the final two rounds went ahead, Blakeley’s lead was already very sizeable, with 15 points between him and Boroumand. Meanwhile, Opmeer was 29 points behind.

Since F1 22 launched, Blakeley has seemingly been the man to beat. In World Online Racing – the other major league for F1 Esports drivers – Blakeley is also leading that championship by quite a margin. However with the split between the esports build and retail version of the games, it’s unknown if that series will also end its season early as it’s supposed to run until the last week of November.

The F1 Esports Series Pro Championship is set to begin in September, even though a schedule hasn’t been officially announced yet. Blakeley could very well be the early favourite for the title if his form in PSGL and WOR is anything to go by, although Boroumand has also been in remarkable form so assuming Blakeley will be with McLaren, they could very well be winning both titles.

What do you make of the F1 Esports game build controversy? Tell us on Twitter at @OverTake_gg or in the comments down below!