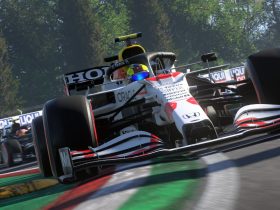 Thrustmaster’s twitter account has posted a cryptic image, and it’s got people guessing as to what it could mean.

A cryptic image posted to the official Thrustmaster twitter account has sparked a good deal of discussion about what it could be teasing. The gaming hardware company has made no further announcements or comments regarding the image, so for the time being the matter is still rife with speculation.

What could it mean?

The image that Thrustmaster posted consists of the letters ‘T-DCC’ along with a red pause symbol in the top right of the screen. T-DCC could theoretically mean a number of things. Some have taken the D to stand for direct drive. If this is the case, then it suggests that Thrustmaster would be releasing a new direct drive wheel – perhaps at a price point to rival Fanatec’s new DD wheel base.

There is another interpretation of T-DCC. It seems likely that the DCC aspect is actually in roman numerals, making the number 700. This feels like a sensible solution, as a device called a T700 would fit nicely with the company’s previous wheel models such as the T150 and T300. If this theory is indeed correct, then there isn’t any special information that can be gleaned from the image, aside from the fact that it reveals an upcoming new model.

As for the pause symbol in the top right-hand side of the image, this is likely an indication that the picture is in fact a screenshot of a video, rather than a standalone image. This suggests that a trailer or reveal video for what may be the T700 can be expected in the near future. If or when that video comes around, many questions will be answered. For now, all we can do is hope for direct drive.

Do you have another interpretation of Thrustmaster’s tweet? Tell us on Twitter at @OverTake_gg or in the comments down below!