Esports racing series that made it to TV

We collected the opinions of pro racers, the community and some spicy memes about Logitech’s new wheel.

Logitech announced their next generation racing wheel G923 on Wednesday, August 5. The hardware will hit the market in August 2020 at a price of $399.99. We collected the best community reactions to the announcement, ranging from excitement, to heavy discussion, and even some bold memes.

If you want to know all the details about Logitech’s new flagship wheel, make sure you check out our article:

The key selling point of Logitech’s next-gen wheel is a new force feedback system called “TRUEFORCE”. World’s Fastest Gamer James Baldwin has already got his hands on the hardware and seems to be rather impressed.

I can confirm I’ve used this on ACC, it actually feels insane🔥 https://t.co/lFB4WefMx9

The full power of the TRUEFORCE system can only be used in Gran Turismo Sport, Assetto Corsa Competizione and GRID (2019). Esports commentator and former Nitro Nights guest Actrollvision is excited about the new feature nevertheless.

Had this for a few months. Have done endurance events on iracing, so definitely have the hours behind to give an opinion.

A huge step in the right direction, Trueforce is only just beginning, the future is huge. The brake pedal is on par with my children in terms of importance. https://t.co/yVFFzGa8HW

Other voices from the community have been sceptical about the new release. A lot of users think that the G923 looks very similar to its predecessor, the Logitech G29. They assume there might be no significant differences between the wheels, and therefore can’t justify buying the new hardware.

“Never change a winning team and all, but Logitech should upgrade their tech for their wheels. Unless they changed to metal gearing and refined the meshing, which I highly doubt.”
– mohragk

Memes are simply the best way to express your point of view, as this example proves:

The discussion about whether they are same wheels or not is very spicy. A reddit thread about the topic has already received more than 300 comments so far.

“So pretty much not an upgrade in any way and more a direct replacement. Again. Only new feature is something that sounds like a more advanced version of the wheel vibration setting, but in return it makes your wheel loud again, negating the only reason to swap your G27 for a G29.”
– RunRookieRun

Our Nitro Nights host Froskurinn is very excited about the G923:

I want one. Jesus that’s clean.

The price of the wheel has become another big point of discussion in the community.

Our former Nitro Nights guest Danny Giusa does not seem to agree with the initial pricing.

“€399,- seems a bit steep. This “trueforce” thing better be an actual improvement.”
– borfavor

Time to get an older product?

There are some smart shoppers already see their chance to grab an older-gen Logitech wheel for a good price.

“Hopefully the G920 drops in price and is actually available.”
– whatsupbrosky

Those who consider replacing their old wheel with the G923 have to get rid of their old hardware. This reddit user has found a very creative way to dispose of his Logitech G25.

What is your opinion on the Logitech G923? Share your point of view and tweet us @overtake_gg! 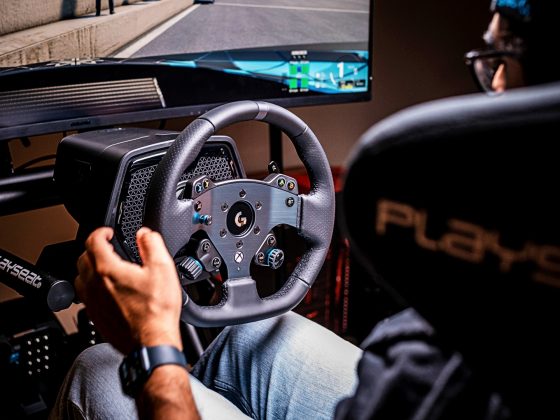