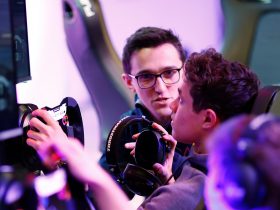 The second round of the all-new V10 R-League sees Porsche24 Redline move to the top of the standings.

After a thrilling opening round at Monza last week, the V10 R-League – a joint venture between Gfinity and Abu Dhabi Motorsports Management (ADMM) – moved to an overcast Brands Hatch in the UK on Monday.

Could Williams and Porsche stretch their advantage?

After their clean sweep in the first round, Williams were firm favorites at Brands and they didn’t disappoint. They won their rounds 2-1 and Kevin Siggy was named the fastest driver of the day.

However, Porsche were perhaps even more impressive, achieving a 3-0 victory against Fordzilla. The result catapulted them to the top of the standings. Elsewhere, Red Bull’s Graham Carroll made some stunning overtakes to bring the team up from fifth overall to third place. Here are the full standings after two rounds:

All the racing from Round 2 is free to view at btsport.com or the BT Sport App from Tuesday 15 September.

If the V10 R-League wasn’t exciting enough, the third round will be held at the notorious Nürburgring Nordschleife – a 20.8km circuit also known as “The Green Hell”. Highlights will be broadcast on Monday 21 September at 7pm (UK time) on BT Sport 2, then all of the action is free to view again on btsport.com and via the BT Sport App the next day.

As usual, Rachel Stringer, Nic Hamilton and Ben Daly host the show from the Gfinity Arena in London, as the drivers battle it out for the £100,000 prize pool.