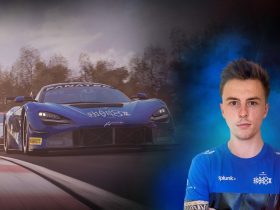 Baldwin v Tonizza: Who will be champion?

Alongside its top tier Ferrari Esports Series on Assetto Corsa, those who have Real Racing 3 on their iOS or Android can also compete in their own competition.

Over the next three weeks, mobile players can participate in the Ferrari Mobile Esports Series using the Real Racing 3 app. The championship is free to enter for all players on iOS or Android, and you can win some big prizes.

From now until 11 November, competitors are tasked with hotlapping a 488 GT3 car around the Monza circuit and getting as best a laptime as possible. Though be aware, if you are now reaching for your mobile to download Real Racing 3, you require to be level four and earn the car through the Ferrari Mobile Esports Series Limited Series Event. Then you can start hotlapping in the Ferrari Mobile Esports Series Time Trial Competition.

The top three times will be the ones to earn prizes. The player who sets the best time will get a VIP experience to a Ferrari Challenge event in 2022 with all expenses like travel and accomodation paid. They’ll also recieve a Ferrari collection shirt signed by the Scuderia’s F1 driver Charles Leclerc.

The runner-up will win a 1:18 scale model of the 488 Challenge Evo, a Pilota Evo limited edition watch and a sports rucksack by Puma. Finally, the third place finisher will be given a selection of items from the Ferrari store such as a t-shirt, cap, sneakers and umbrella. All participating players must be 18 or over, and be from a participating region.

This move by Ferrari is yet another push to legitimise the mobile racing game medium, as we have seen recently with the likes of Project CARS and Assetto Corsa creating mobile versions.

We have seen it being included in events such as the McLaren Shadow Project Final. The competition was open to players of top level simulations such as iRacing, rFactor 2, Assetto Corsa Competizione, more casual console games like Project CARS 2 and Forza Motorsport 7, and even the mobile app Ferrari are using, Real Racing 3.

Mobile gamers entering the McLaren Shadow Project initiative can qualify for the semi-final stage of the new Esports competition from Thursdayhttps://t.co/IFMluYtaQ0

So if you have what it takes, go pick up your iOS or Android smartphone with Real Racing 3 and get hotlapping, and who knows? Maybe you’ll be on your way to a Ferrari Challenge event in 2022!

Will you be trying your hand at hotlapping the Ferrari on Real Racing 3? Tell us on Twitter at @OverTake_gg or in the comments down below!