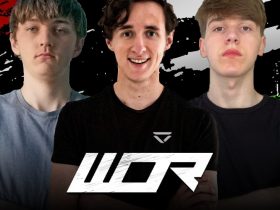 In this week’s episode of Nitro Nights, Stefanie Langer joins the team and chats to professional sim racer Mitchell deJong. From the 2020 Porsche TAG Heuer Esports Supercup to 24 Hours of Le Mans Virtual 2020, Mitchell has done it all and has a lot to say about sim racing.

DeJong’s passion for racing started fairly conventionally with karting at the age of five. His father played a big role in those early years – he built off-road vehicles for a living, and Mitchell helped out around the garage. Growing up in such an environment meant that he didn’t feel the pressure, and simply drove “for fun”.

At the age of 15, things began to get more serious when he received an offer from Red Bull to take part in rallycross. He came second in the Rallycross X Games, making him the youngest driver to win a medal in the tournament. Since then, he has moved towards sim racing. Now, deJong’s schedule is always full and constantly expanding – in addition to the Porsche TAG Heuer Esports Supercup, he hopes to take part in the eNASCAR Coca-Cola iRacing Series next season. He will therefore feature in the two biggest championships in iRacing, which promises a busy year ahead for the American!

When he isn’t racing, Mitchell works as a coach at the Virtual Racing School (VRS). His area of expertise is rallycross, and he reveals to Steffi that the most important aspect of the sport is to be “smooth” and avoid “over-driving the car”. Rallycross cars are powerful and the tracks are tight, so it’s crucial to avoid pushing too hard and making mistakes or even breaking the car over the jumps.

Afterwards, Steffi and Mitchell discuss the top social media posts from the week, before Mitchell takes on the ‘Hot Lap’ on Trackmania. How will he fare compared to previous guests… and Tom Deacon?