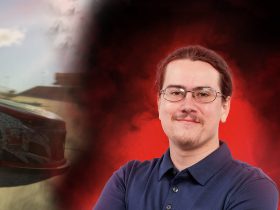 eNASCAR champion: “I survived heart surgery to get here”

The third season of the V10 R-League has just concluded. However, there’s one glaring issue with this series that prevents it from reaching its full potential.

From 22-23 July at the Yas Mall near the Abu Dhabi Grand Prix track, esports racers gathered to compete in the Semi Finals and Finals of the V10 R-League. The championship consists of teams going head-to-head against each other in very short races using a screaming V10-powered F1-style car.

It’s a series that strays away from the norm of racing, with its 1vs1 structure and greater emphasis on the team’s performance across all three of their drivers.

But it does have one issue. To understand what it is, let’s recount the history of the series and its unique format.

History of the V10 R-League

The series had its first season which ran from September-October 2020 and eight teams would all go up against each other. These were teams such as Williams, Red Bull and Racing Point from F1, as well as the likes of YAS HEAT (operated by Veloce Esports, who run many F1 Esports teams), Fordzilla, BMW, Jean Alesi Esports Academy and Team Redline (who were partnered with Porsche).

Teams would compete in three types of races with a different opponent in each event. A 1vs1 Best-Of-3 set of races in which each driver would individually go against another driver from the opposing team, with the team winning two races being the team who earns the first point.

The second challenge was a Relay Race. A four-lap affair where both team’s three drivers take it in turns to race with one driver from each team doing an extra lap to attempt to undercut or overcut the other team.

Finally, there was a Team Race with both team’s full set of drivers on track at the same time using the points system 10-6-4-3-2-1 with the team that accumulated the most combined points earning the point for that challenge, unless the teams tied in which case, neither score a point.

Throughout the first season, the V10 R-League raced on many tracks. Monza, Brands Hatch, Nordschleife, Vallelunga, Laguna Seca, Spa-Francorchamps and Yas Marina were all featured. In the end, Porsche24 by Redline came out on top after seven rounds of action and won the majority of the £100,000 prize pool.

For the second season, two new teams joined in the form of Romain Grosjean’s R8G Esports team and McLaren Shadow, Racing Point rebranded to Aston Martin and Redline’s connection with Porsche ended. With the new season, the organisers decided to change up the format. They split the teams up into two groups, gave one team in each group a break week, and ran group stages where each team got a chance to face off against others in their group.

After the group stages, there would then be a set of Quarter, Semi, 3rd place final and Final to cap off the season. But to make things more interesting, they implemented a picks-and-bans system similar to more mainstream forms of esports.

In each matchup, teams have a choice between a pool of five tracks: Silverstone, Spa-Francorchamps, Monza, Mugello and Yas Marina. Teams can ban one of the tracks preventing the other team from selecting it and then nominate their own, and it kept the competitors on their toes. The 1vs1 Best-Of-3 races were scrapped in favour of a Relay and Team race on each team’s selected tracks.

Through April-May 2021, Redline and McLaren Shadow topped their groups but it would end up being between Aston Martin and BMW in the final after they both came from the Quarter Finals. BMW subsequently took the crown and £25,000 with Aston Martin earning £12,500, and McLaren defeated Redline in the 3rd place playoff and received £5,000.

It was much of the same for Season 3 which ran from June-July 2022, with the only change being the addition of Mercedes who took McLaren’s place. They actually ended up winning the championship in their first season defeating Redline in the final, with YAS HEAT beating R8G Esports for 3rd place.

The Problem and How to Solve it

Season 2’s track nomination and vetoing system is, in theory, a great idea. It causes drivers to split their time between tracks and not focus solely on the one circuit and get more practice in. The tracks themselves are all great, Yas Marina more so in Season 3 when it was updated to reflect the changes they made in the real world.

But Silverstone, Spa-Francorchamps, Monza and Mugello are all very enjoyable circuits to both drive and watch races on. However, the V10 R-League proved that you can indeed have too much of a good thing. It got very repetitive very quickly, seeing the same five tracks constantly, much like watching a Scottish Formula Ford championship with eight rounds at Knockhill.

Repetitiveness shouldn’t be something that should be experienced when it comes to a selection of circuits in a virtual racing competition. But of course, how can this be fixed? It’s simple really, bringing in more tracks.

The argument for capping the track pool at five circuits is to prevent the drivers from having too much to have to practice on. So keep the selection of tracks the same amount, however to keep things fresh, perhaps every time a team picks a track, that’s then off the table for them for the rest of the group stages.

Let’s say all teams start with the five tracks we’ve all come to know in the V10 R-League in the second and third seasons, Redline for example choose to race Monza for their first matchup, that then removes Monza from the tracks they will compete on. Amongst Redline’s track pool will be the same tracks they didn’t select in the previous round, with a new track taking its place.

Redline are still able to race at Monza in future matchups, just only if the opposing team chooses to nominate it. This process will therefore eliminate the repetitiveness of seeing the same five tracks constantly, adding some variety but not be too overbearing for the drivers. Even though these are supposed to be the best drivers in esports and should be able to adapt to new tracks in very little time.

Ultimately, the V10 R-League is a unique championship which tests its drivers in a very different manner to most racing series. It’s got much more of an esports focus and whilst not to everyone’s taste, it still has its appeal.

But to make for a more entertaining, varied and challenging competition, it needs to add more tracks to the pool that teams can select from. Let’s hope they do this for the fourth season.

What do you make of the V10 R-League? Tell us on Twitter at @OverTake_gg or in the comments down below!